Scrooge ain't broke and neither is the government 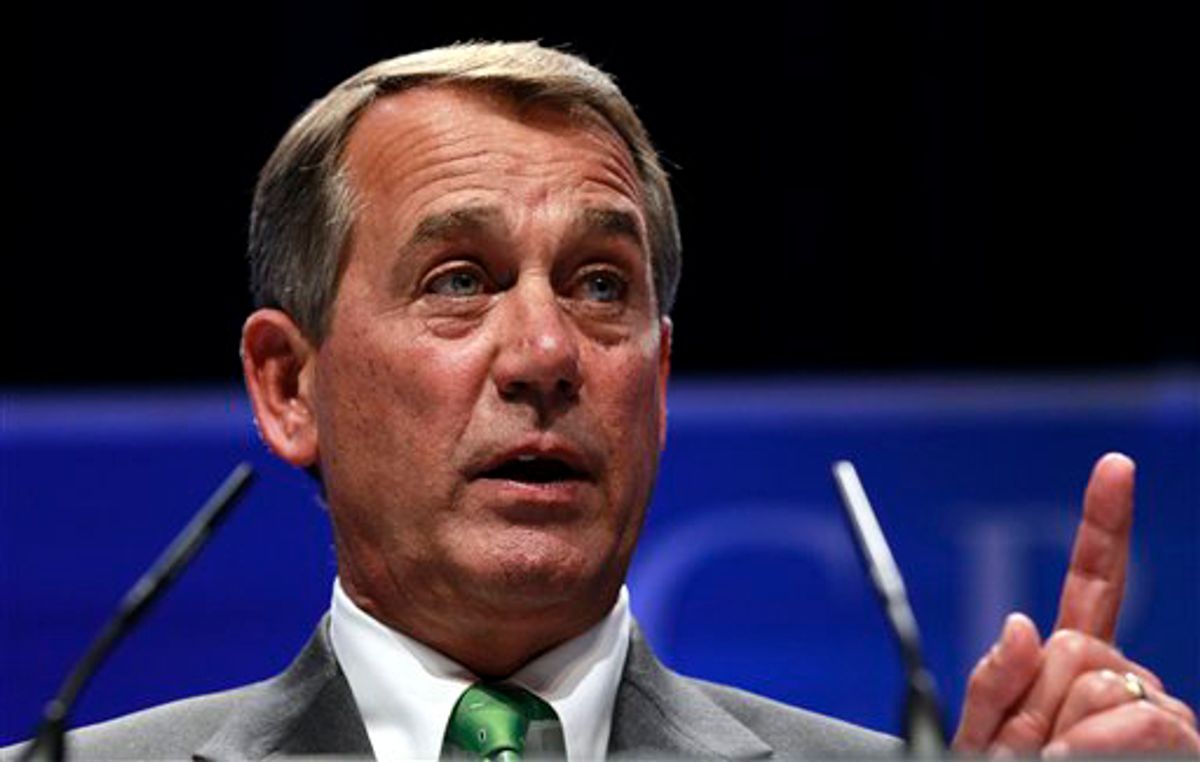 Maybe instead of playing budgetary chicken with congressional Republicans, the White House should search carnival side shows and TV shopping channels for a Democratic Glenn Beck. Any glib pitchman could outline a Republican scheme to sabotage the U.S. economy to gain political power far more plausible than Beck's shaggy-dog conspiracies.

Think about it. Here we are three years into the hardest times since the 1930s, caused by a nationwide real estate bubble and Wall Street scams that would make a blackjack dealer blush. (Actually, come to think of it, unemployment in Las Vegas remains among the nation's worst.)

Catastrophe was averted. The economy's mending. Nevertheless, nationwide unemployment hovers near 9 percent and the recovery's limping at a pace that will take years to restore normalcy. So what do Republicans want to do? Why, to slash spending and put thousands of government employees on the unemployment lines to compete with millions already standing there, of course.

If that makes sense to you, then you've been successfully hoodwinked by what I call the Scrooge McDuck conspiracy. Uncle Scrooge, if you recall, was Donald Duck's tightwad zillionaire relative who wore spats and a top hat even when dabbling in his bullion vault.

Washington's filled with McDuck-sponsored think tanks with names like "the Heritage Foundation" and "Americans for Prosperity." Staffed by hired propagandists and bespoke economists, their fundamental message never changes: more wealth for Scrooge.

For some of these jokers, there's not enough money in the world. So sure they want to put people out of work during a recession. Fear creates a placid, easily dominated workforce. Some call it "crisis capitalism."

Yeah, well, Scrooge ain't broke, and neither is the U.S. government. Anyway, enough about cartoon ducks. Here's a little fish story, a parable if you will, that demonstrates home truths about government spending and economic prosperity:

In Arkansas, where I live, trout fishing is both a major pastime and a source of tourist income. Although rainbow trout are a cold-water species not native to the state, world-record fish are taken frequently. Just writing about it makes me want to load my gear and head for Calico Rock.

Anyway, whether you know it or not, these are government trout. Your tax dollars created and maintain this matchless resource. How it started was that mainly under President Eisenhower, the Army Corps of Engineers built several flood-control and power-generating dams in the White River basin: an Arkansas and Missouri version of the TVA.

The dams created a string of picturesque lakes straddling the state border: Beaver Fork, Table Rock, Bull Shoals and Norfork. Each became a magnet for real-estate developments and resort communities, transforming one of the nation's historically poorest regions. No government dams, no Branson, Mo., is one way of thinking about it.

My child bride cherishes a snapshot she took of President Kennedy when he came to Arkansas to dedicate Greer's Ferry Dam. However, the dams also submerged thousands of acres of cropland and drowned an excellent smallmouth bass fishery. Water emerging from lake depths to power electrical generation is too cold for native fishes. Hence federal trout hatcheries, offered to mitigate environmental damage.

So now (surprise!) the Obama administration wants to cut the Fish and Wildlife Service budget, potentially closing fish hatcheries that keep it all going. Trout can't breed in dam tailwaters and must be constantly restocked. Should hatcheries close, the fish would soon vanish. So would the economic benefit to dozens of communities along the White and Little Red Rivers.

It's an absurd false economy. Resort operators say they pay more in taxes than the cost of operating the hatcheries. (Roughly $7 million is involved.) Arkansas Democrat-Gazette outdoor columnist Bryan Hendricks argues that "closing those hatcheries would exacerbate the dams' negative environmental impact and would essentially constitute a breach of contract."

So did some Obama political appointee decide: "To hell with Arkansas. They didn't vote for us anyway. Let them ask the tea party to pay"?

Contrary to McDuck and Tea Party dogma, American prosperity has always depended upon countless such examples of public-private synergy. There are similar stories all across the country.

Meanwhile, measured as a percentage of GDP, federal tax revenue is at 14.4 percent -- the lowest since 1950. (The 40-year average is 18 percent.) Marginal income tax rates on the McDuck class top out at 35 percent- - compared to 50 percent under President Reagan.

Only Mexico and Chile, among industrial nations, pay less.

Is that the new competition?