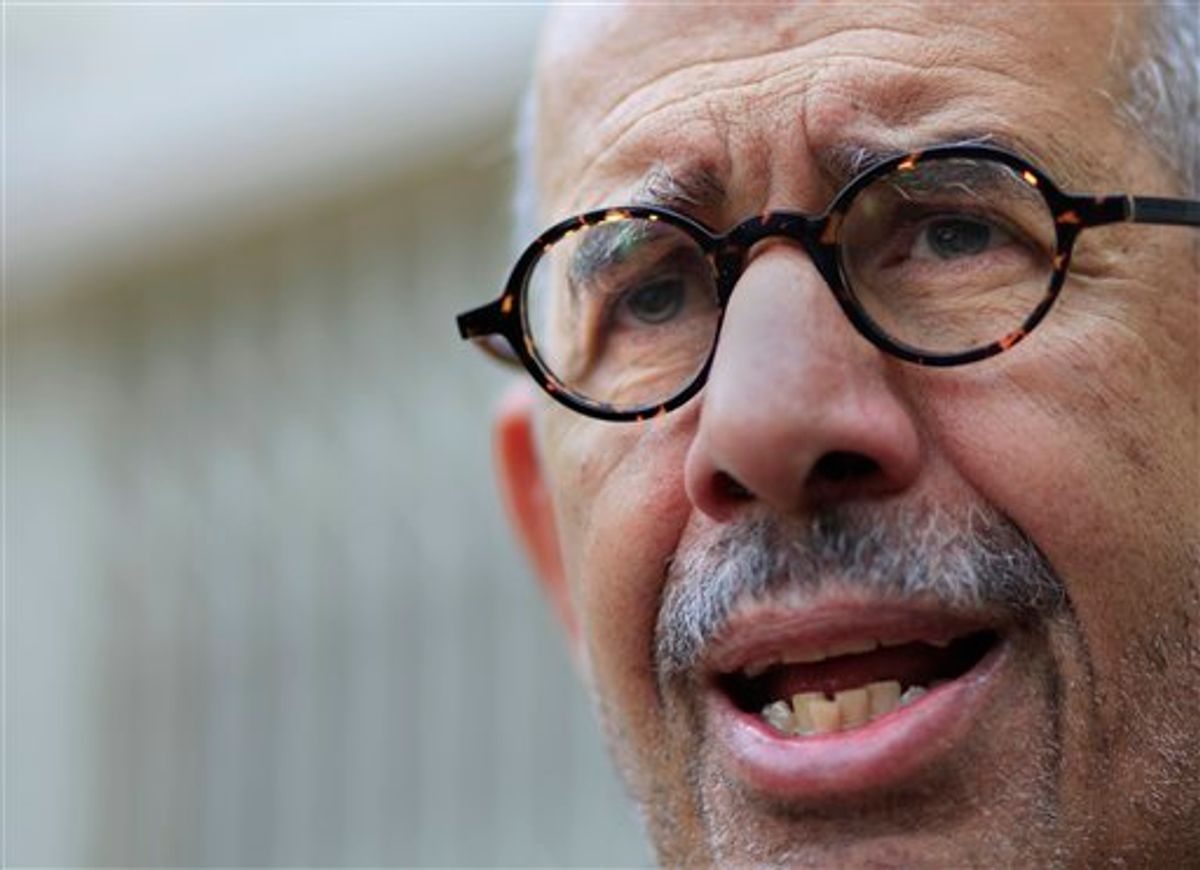 Egyptian pro-democracy advocate Mohamed ElBaradei, former chief of the UN nuclear watchdog agency and Egypt's reformist leader, talks during a press conference in Cairo, Egypt, Friday, Feb.4, 2011. The Egyptian military guarded thousands of protesters pouring into Cairo's main square on Friday in an attempt to drive out President Hosni Mubarak after a week and half of pro-democracy demonstrations. (AP Photo/Amr Nabil) (AP)
--

Nobel laureate Mohamed ElBaradei, former head of the U.N. nuclear watchdog agency, said Wednesday that he will run for president only if a real democratic system is in place, not the reforms Egypt's military leaders are proposing.

ElBaradei told a private Egyptian television said that suggested constitutional amendments to move Egypt toward democracy are "superficial." He appealed to the military rulers to scrap them or delay a scheduled March 19 referendum on them.

"We are at a decisive period in Egypt's history," he told ONTV. "We shouldn't rush. Everything should be on a solid basis."

The constitutional amendments limit a president to two four-year terms. They also allow independents and opposition members to run, impossible under the regime of deposed President Hosni Mubarak.

Even so, ElBaradei said he would vote against the amendments. He said the changes don't limit the powers of president or give enough time for political parties to form, setting parliamentary elections soon.

The military rulers have said they want to hand over power six months after the ouster of Mubarak. The proposed amendments suggest that elections, both presidential and parliamentary, would take place during that period.

However, there is no proposed change in the laws that regulate forming political parties. This, ElBaradei said, would allow remnants of Mubarak's party and the well organized Muslim Brotherhood to control the new parliament. He also expressed concern that the current lack of security would hamper ability of authorities to secure the elections or protect people going to vote.

"After all this, how can the parliament be representative," he said. "I can't rule Egypt for one day under this constitution."

Since his return to Egypt last year, ElBaradei has reinvigorated a youth movement that reached out to him as a leader in their calls for reform, seeing him as independent, untainted by state corruption and as a figure who represents international success.

ElBaradei, a prominent figure in the mass protests that forced Mubarak out, appeals to educated and middle class Egyptians, but lacks a wider popular following.

ElBaradei described himself as a social democrat, and said, "democracy is my program."

"My first decision would be to bring all experts locally and abroad to install a new education system," he said. "Without education there will be no Egypt of the future."

ElBaradei said if he were to become president, he would restore relations between Egypt and Iran, severed in 1979.

He criticized Egypt's foreign policy as characterized by emotions and captive to slogans.

On the key issue of Egypt's 1979 peace treaty with Israel, which he helped negotiate, he said it was a mistake to forge a separate agreement with Israel, but he would not cancel the treaty. Instead, he said, he would try to restore what he called "compatible" relations with Israel.

He said the current situation is "peace between the Egyptian government and the Israeli government, not the people."

He said there a Palestinian state cannot be created through war, but he called the current peace process a "ridiculous joke." Peace talks are stalled over the issue of Israeli settlement construction in the West Bank.