The GOP's assault on workers took a big step forward Wednesday night. Now it's urgent that Obama stand up 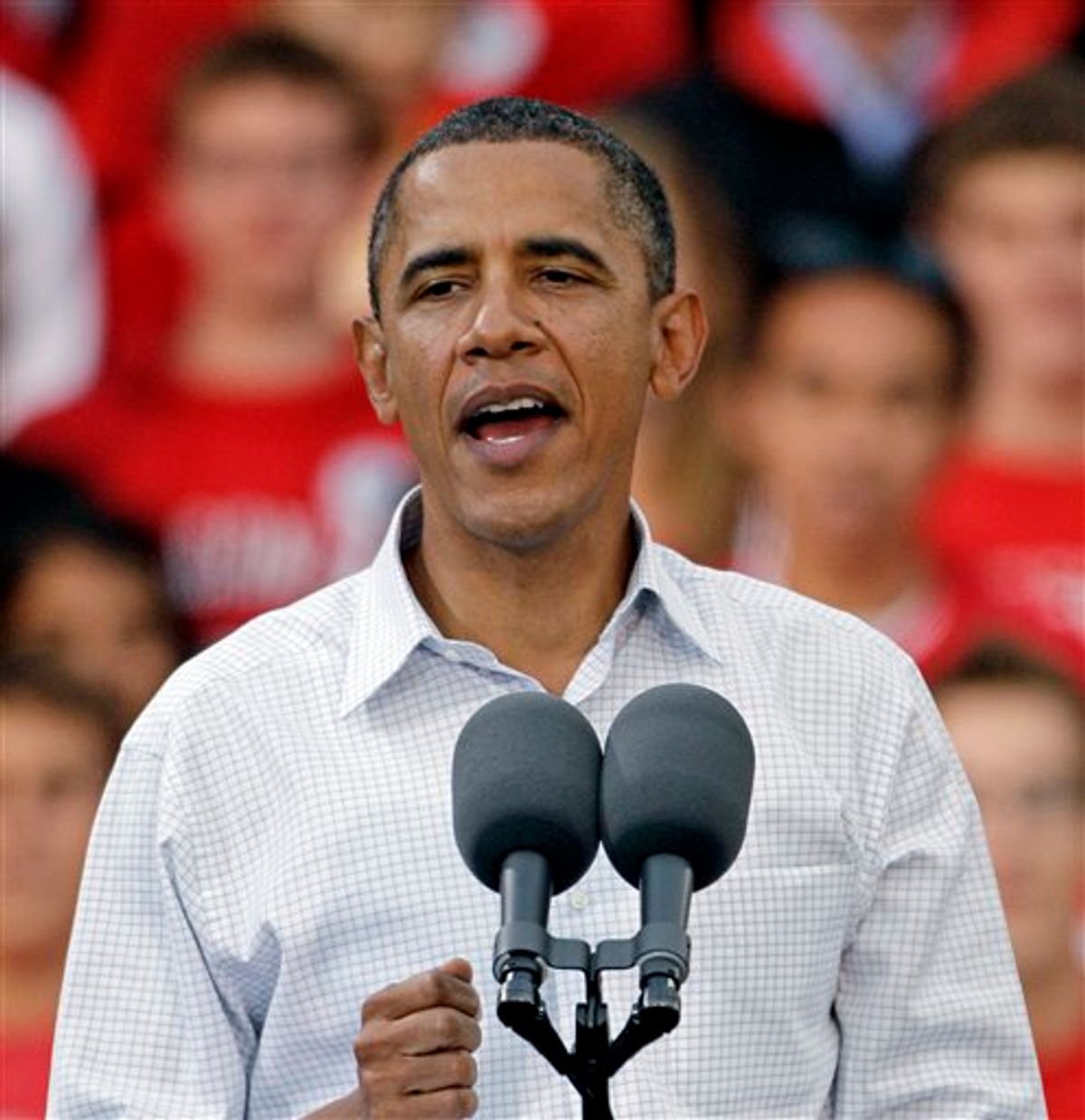 File - In this Sept. 28, 2010, file photo President Barack Obama speaks to a rally at the University of Wisconsin in Madison, Wis. Few states handed Democrats bigger losses in the midterm elections than Wisconsin, even though President Obama campaigned actively there. But the president will be back again Wednesday, this time to road-test the themes from his State of the Union message. (AP Photo/Morry Gash, File) (AP)
--

On Wednesday night, Wisconsin Republicans used a legislative dodge to ram home one of the most devastating attacks on union rights in American history. Using the financial crisis and ongoing depressed state of the economy as a foil, the GOP essentially neutered Wisconsin’s public sector unions.

Other states, whose leaders have been closely watching the Wisconsin fight, will likely follow suit. Politicians in Indiana, Ohio, Pennsylvania, Idaho and elsewhere have all expressed interest in taking away collective bargaining rights from some or all public sector unions. At the federal level, public sector unions are increasingly in the crosshairs of resurgent Republicans in Congress.

Overnight, long-standing contracts on wages, pensions, healthcare benefits, and a slew of other conditions, for teachers, firefighters, police officers, correctional officers and others, have become vulnerable -- fair game in a series of power grabs that, increasingly, is coming to look like a form of latter-day class warfare. Yes, the language used is that of conservative populism; but the effect is anything but populist. America is fast becoming a plutocracy, a land divided between a super-wealthy minority and an increasingly insecure and fragile majority. Collective bodies such as trade unions, which fought for decades to level the playing field, are being swept away by a tsunami of conservatism compared to which Reagan’s demolition job against the air traffic controllers in 1981 looks positively benign.

If the examples of states like Idaho, which adopted so-called "right to work" laws in recent decades, hold any lessons, here’s what will likely follow from this. First, unions will be weakened to the point of irrelevancy. That will destroy not just the bargaining power of labor but, as important, the culture of unionism, the political memories that are kept alive in union halls, on picket lines, and in workplace meetings. In Idaho’s case, and that of many other states, within a few years of diluting union power, as that cultural memory dissipated so the state went from being somewhat progressive politically to being reliably hyper-conservative -- and also went from relatively high political participation rates to low voter turnout and a sense among working people of apathy and powerlessness. Not surprisingly, when trade unions are destroyed, an entire political eco-system is ripped asunder with them.

As I write this, I’m listening to music from Woody Guthrie -- a gentle folk song about the honor of hard work and the dignity of working people. I feel a rustling of ghosts from America’s past stirring -- the victims of New York’s Triangle Shirtwaist Fire, for example; the men and women who fought (and sometimes died) for union recognition at car manufacturing plants and other factories; in mines; in fields; and in schoolrooms across the country and the decades. Walker’s machinations in Wisconsin sure ought to be riling those ghosts up. After all, theirs is a noble history, and these days it’s being crudely violated, vandalized.

President Obama is the only person in the country with the clout to reframe the debate on public sector unions in a more sensible manner, and he seems to have wrapped himself in a radio silence. One can only assume it’s a deliberate, tactical, decision, an attempt to win back anti-union, conservative independent voters. After all, when the president wants things said, he has a remarkable ability to make himself heard. The chief executive can command national attention simply by calling a prime time press conference, or asking the networks to set aside some air time for a presidential address to the nation. And in Obama’s case, he’s not only the president; he’s also a first rate orator with an almost preternatural ability to get people to see things his way when he really wants them to.

So, how about using that presidential bully pulpit to defend not just Wisconsin’s beleaguered unions, but, more generally, union culture in America? How about addressing the nation tomorrow about what is happening in Wisconsin. Sure, he’d be accused of partisanship -- an accusation that he seems to fear above all others; but so was Roosevelt when he held those devastatingly effective fireside chats with America to sell progressive New Deal policies like Social Security, public works programs, and the eight hour work day – as well as to warn his audience not to be taken in by the reactionary words of moneyed interests opposed to his reforms. At a certain point, politics is, by definition, partisan.

During the Great Depression, FDR unabashedly sided with unions in the great workplace battles of the day, and time and again he used the presidential bully pulpit to take on the moneyed interests whose actions had precipitated financial collapse. "It is one of the characteristics of a free and democratic nation that it have free and independent trade unions," he told Americans. His wife, Eleanor, was an unrelenting advocate for the rights of workers. And his labor secretary, Frances Perkins, was also an outspoken defender of working Americans and, specifically, the principles of unionism.

A generation later, Lyndon Johnson used the Oval Office bully pulpit to equally potent, but "partisan," effect when he took to the airwaves to argue the moral imperative of passing meaningful civil rights and voting rights acts.

Today, three quarters of a century after FDR rallied the nation to back his New Deal, a liberal president, with a background in community organizing, is standing largely silent as the single biggest rollback of American workers’ rights in modern times unfolds. It’s shaping up to be one of the great, and most tragic, ironies in American political history. Despite all the "working man" pageantry of the Obama inauguration, despite all the earnest, sonorous, emphasis on reclaiming the country for the hard scrabble men and women who built America, there’s now a real risk that Obama will end up as the president who passively presided over the utter eclipse of organized labor.

Sure, Labor Secretary Hilda Solis has held a few teleconferences with union leaders to express her solidarity with the public sector unions in Wisconsin; and, yes, on February 17th Obama himself declared that Wisconsin Governor Scott Walker had launched an "assault" on organized labor. But there’s been no follow-up, no passion, no focused engagement on the issue over the past month. In short, the amount of political capital the administration has risked on behalf of the public sector unions has been minimal. Obama’s been all over the country in recent weeks, but neither he nor any of his senior cabinet colleagues and economic advisors stopped by the capitol building in Madison to lend support to the protesting workers in Wisconsin.

Morally, the actions Republican lawmakers took yesterday in Wisconsin are disastrous. But, on a pragmatic level they’re also devastating to Democrats nationwide, weakening the party’s support base and making it that much more likely that the GOP’s extreme brand of politics will, over the long-run, come to be seen as the new norm. Like it or not, Obama has a dog in this fight. He simply can’t afford to stand on the sidelines.

So, how about using that bully pulpit? How about telling Americans the stakes that are in play here? How about treating Americans to one of those history lessons that candidate Obama, talking about race, civil rights, or the country’s complex legacy of struggle and dreaming, unleashed to such devastating effect back in 2008? After all, FDR’s words on the importance of protecting organizing rights for labor are as true today as they were in the 1930s.

We are sleepwalking toward the abyss. It’s time for Obama to expend some capital shaking the country out of its slumbers. The Republicans have crossed a Rubicon in Wisconsin; Obama needs to marshal the pushback, and he needs to do so now.