How big a problem is the Redondo Beach fish kill?

Millions of fish died in California yesterday. Scientists say this isn't extraordinary. How worried should we be? 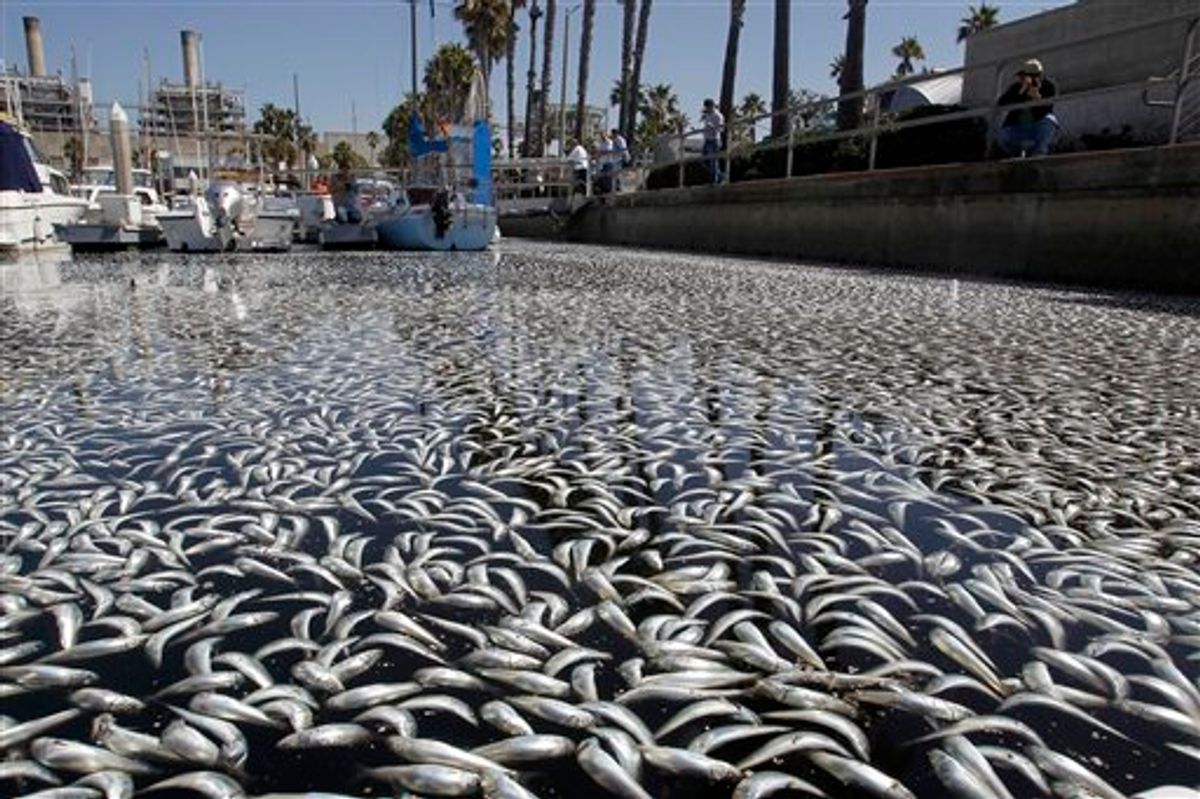 A million fish died in Redondo Beach, Calif.'s King's Bay Tuesday. After making international headlines, the sea of dead sardines caused an eerie sheen of silver on the harbor's surface that had some folks talking about plagues and apocalypse. However, much the same as when scores of animals were dying en masse earlier this year, scientists insist that the Redondo event is not all that unusual, that these sorts of die-offs are no cause for alarm.

We got in touch with Ed Parnell, a marine ecologist at University of California at San Diego's Scripps Institution of Oceonography, to learn more about the causes of mass fish kills such as occurred in Redondo Beach, and how serious a threat they pose.

En masse animal deaths happen more often than we would tend to imagine. What are some causes for fish deaths like those in Redondo Beach?

There are different reasons for the fish kills that are going on around the world. Since we [developed] industrialized agriculture and are now able to make nitrogen -- fix atmospheric nitrogen to make fertilizers -- we've been introducing lots of nutrients that encourage large algal growth. The algae is really dissolvable in water, and it's quickly moved in a watershed from the agricultural lands into estuaries and out into the oceans on the coastal shelf. There are "dead zones" that have developed increasingly over the years because [this depletes the amount of oxygen in ocean water].

Another factor is the oceans have warmed. Water that's warmer has less capacity to carry oxygen. And in upwelling systems -- there are different areas of the world that have upwelling systems, like the California currents -- there has actually been an increasing amount of hypoxia [which is when there is less than the typical saturation of oxygen in water]. Areas that are low in oxygen are being forced further up on the shelf than usual or typical.

It's pretty well established scientifically that oxygen hypoxia is becoming more of a problem, and it's due to a combination of things [like] the warming of the oceans, the introduction of agricultural nitrogen fertilizers into estuaries -- the Gulf of Mexico is a good example of that -- and also natural cycles.

What do you think happened in the case of Redondo Beach?

Honestly, I have no idea what happened there, but some sardines got in there in a huge [number]. Sardines generally don't go into the harbors like that. Usually they stay on the coastal shelf. We had a big wind the night before they came in and died. They may have just gotten pushed in there by the confluence of currents. Maybe their schooling behavior pushed them into the harbor and there were so many of them in that back part of the bay that they basically used up all of the oxygen. People that were up there measured lower oxygen levels. Right now, there is pretty low oxygen in the California current, mainly because we're in a combination of an El Niño cycle where heavy cold water is being pushed up on a shelf that's low on oxygen. It's making excursions farther up on the shelf, if you will, so the ecosystems on the shelf are being exposed to less and less oxygen, and periods where there are lower [amounts] of oxygen.

[Scripps has] preliminary data to see if it was associated with a large-scale event. We're about 100 miles from Redondo's King Harbor. There wasn't any large-scale showing of that low-oxygen water, so its most likely that they just got in there and used all the oxygen.

How much of this -- these fish kills and the "dead zones" you spoke of -- are caused by human activity?

Well, the dead zones caused by the fertilizer are purely anthropogenic. There are many systems around the world that are affected that way. And it's because we've been fixing nitrogen. There is a process called the Haber-Bosch reaction that was an industrial way to fix nitrogen. It's a very greenhouse-gas intensive operation, because it takes a lot of energy. It fueled the green revolution that basically allowed us to increase to this huge population size we have now. It also utilizes an incredible amount of fossil fuel to undertake. In the long run it's unsustainable. We have to figure out an alternative.

How does climate change contribute to these dead zones all over the world?

Well, there are hypoxic zones. Anoxia is a complete lack of oxygen and hypoxia is less than what you would get with typical saturation. Atmospheric oxygen diffuses into the water column. Once you go deeper the oxygen becomes less and less. Deeper water pools are formed in the North Atlantic and the South Atlantic. Those are areas where the deep water has been in most recent contact with the atmosphere. It sinks in the Atlantic, and it makes its way in this huge conveyer-belt circulation system into the Pacific and Indian Oceans. By the time that water gets into those oceans, it's more oxygen depleted than it is in the Atlantic. With climate warming, what may happen at some point is that formation of deep water may shut off. And if that happens, we're going to lose the source of oxygen to the deeper parts of the oceans. That happens over hundreds and thousands of years, but we could shut that down from burning our fossil fuels.

How much of a threat is this phenomenon to the biosphere?

It's a threat to the biosphere as we know it. There have been events in geological time where there's been no oxygen at the bottom of the ocean. It's not that the world hasn't been there before. It's just going to be different than what we've experienced. There's always going to be oxygen in the surface waters where a lot of the life is.

In terms of preserving our way of life and having a biosphere that's conducive to human life, how severe a problem do these sorts of developments represent?

The oceans are pretty much at maximum output in terms of protein. We have increasing population on the one hand, and a lot of the world depends on the ocean for its protein. So the only way to make up that deficit is to increase terrestrial agricultural practices, or eat at a lower level in the food chain. So instead of being at the top predator level, we move down a few notches, which is probably what's going to happen. Overall, the ecology of the oceans will change, but it doesn't necessarily mean we can't survive as a species on the planet.

When you say go down a few steps on the food chain, can you elaborate on what that entails?

Every step, we eat up higher on the foot chain -- from the plants that produce the food to the cows who eat the food. If we're eating in the ocean, we've started out as the highest-level predators. The higher on the food chain you go, the more organic carbon has to be produced to support that level of activity. If we're at 9 billion people, like the extrapolation is for 2050, that's a lot of people. We're definitely going to have to adjust how we do things, how we do business.