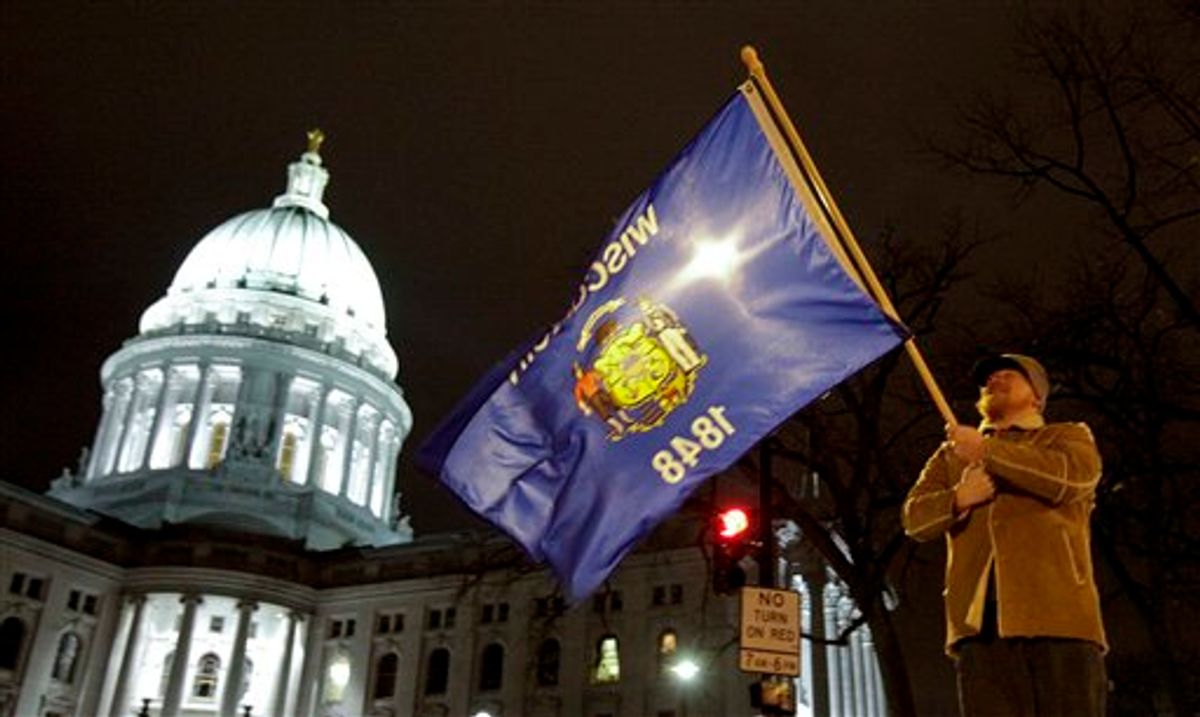 Union supporter Stanley Minnick of Madison, Wis., protests outside of the the state Capitol in Madison, Wis., Thursday morning March 10, 2011, in opposition to the governor's proposed budget to eliminate collective bargaining rights for many state workers. (AP Photo/Andy Manis) (AP)
--

Police carried dozens of protesters from a hallway leading to the Wisconsin Assembly on Thursday as Democratic representatives pounded on the locked door of the chamber, demanding to be let in to the room where a vote was scheduled on an explosive bill that would take away public workers' collective bargaining rights.

At least 100 protesters packed the hallway, pounding drums, while the Democratic representatives gathered in front of the doors, which were opened just before 11:30 a.m. At least 50 protesters were carried out by police, and the building was locked down briefly while officers did a security review.

Rallies against the bill have attracted thousands of protesters to the Capitol over the past several weeks. A vote on it had been held up after 14 Democratic senators fled to Illinois three weeks ago, leaving that chamber one short of the 20 members needed to take up any measures that spend money.

Republicans got around that Wednesday by using an unexpected but simple procedural move to remove all spending measures from Gov. Scott Walker's collective bargaining legislation and voting to approve it without Democrats present.

About 200 people spent the night in the Capitol in protest over the Senate's swift and unexpected passage of the bill.

With the Assembly's vote scheduled for 11 a.m., dozens of Democratic representatives showed up to find the doors to the chamber locked.

"What more egregious, illegal, unethical step can be taken to prevent democracy in Wisconsin?" asked Rep. Donna Seidel, D-Wausau, as she pounded on the door along with her colleagues.

With the Assembly empty, it was not clear where Republican lawmakers were. They showed up and began to file in after the doors were opened.

Protesters packed the Assembly gallery, sitting quietly as lawmakers prepared to vote. In other parts of the building, they called out and shouted as television cameras recorded the scene.

Police began clearing protesters out about an hour before the scheduled vote. Danny Spitzberg, 26, a graduate student at the University of Wisconsin-Madison, said officers gave protesters little explanation for why they needed to leave. He walked out on his own after being ordered to leave, but others were dragged through the hall.

"This is grossly undemocratic, it stinks up the whole process," Spitzberg said.

At a news conference at the Wisconsin State Fair grounds in suburban Milwaukee, Gov. Scott Walker said he was traveling and hadn't been to the Capitol on Thursday, but he was concerned about problems he had been told were being caused by a handful of protesters. He did not specify what those problems were.

Walker said the judge who has been deciding access to the building also was being apprised of developments, and he asked the protesters to remain peaceful.

"People can have a civil, passionate debate about this. One doesn't have to offset the other," Walker said. "It is my hope and my request to the people of the state is that they comply. My worry is frankly people coming in from other states who aren't as interested in complying with the civility we've shown here in the state, not only lately but throughout out state's history."

About 15 protesters stood outside the fairground's gates chanting "Recall Walker" during the news conference. They held signs, including: "United We Stand."

Associated Press writers Scott Bauer in Madison and Carrie Antlfinger in Milwaukee contributed to this report.