Gov. Scott Walker pulls a power move and gets his bill passed. Now things are going to get interesting 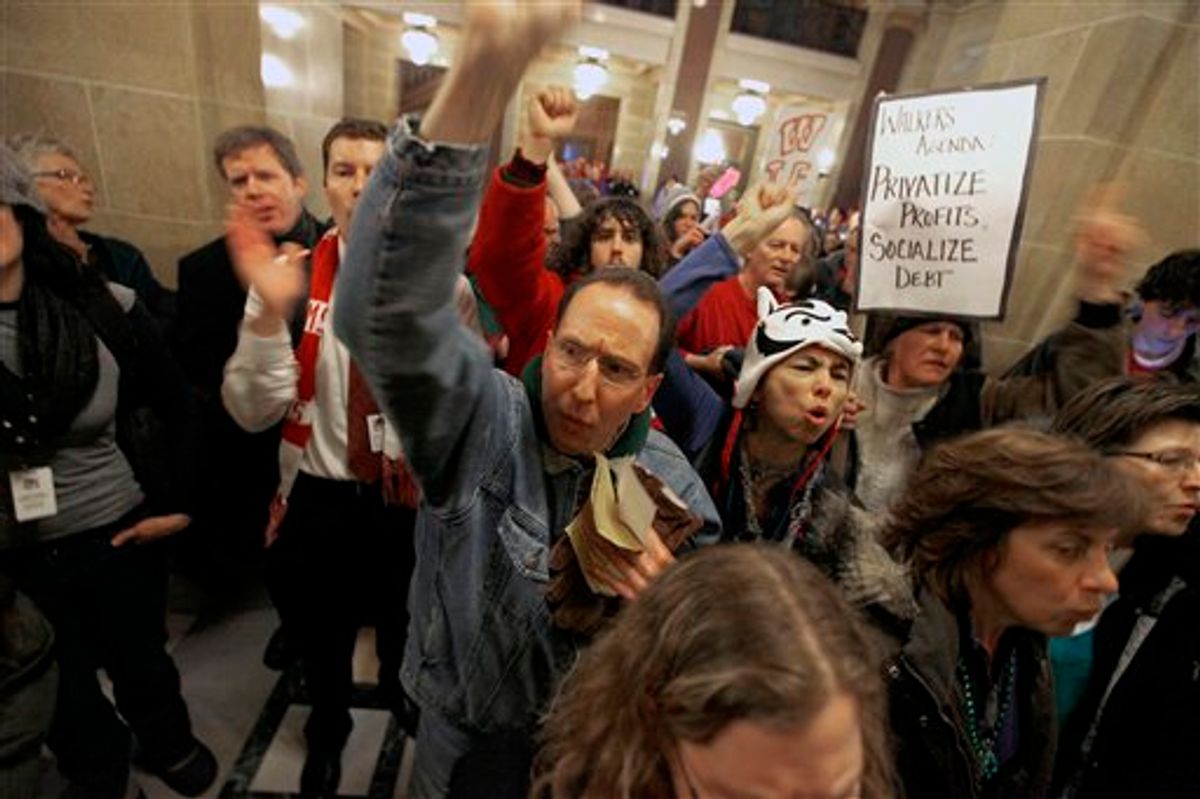 If Wisconsin Gov. Scott Walker was looking for a way to galvanize opposition to his plan to crush public sector unions to an even more fevered, out-of-control, raucous pitch than we have witnessed over the last month, it's safe to say he found it. After claiming for weeks that it was essential to strip government workers of collective bargaining rights in order to help balance the budget, Wisconsin Republicans pulled a neat legislative trick on Wednesday night: By defining the collective bargaining rules as non-budgetary in nature they were able to go ahead and pass their stripped down bill.

Let's repeat that: Wisconsin Republicans stripped the "fiscal" elements of a "budget repair" bill in order to pass it. If that sounds like a contradiction-in-terms to you, you're not wrong.

But such is the prerogative of power. When you have majorities in the legislature and control of the executive, you get to do what you want. It's impossible to avoid analogizing what just happened in Wisconsin with the healthcare reform drama that played out at the federal level. Despite mounting evidence that the effort to pass healthcare reform was inspiring a strong conservative backlash that portended major political consequences, the Obama administration and a Democratic Congress used every legislative maneuver available to them to pass the bill.

And they have been paying the price ever since. Judging by the early reaction to the power move in Wisconsin, it seems likely that Walker and his state legislative allies will also be in for some prolonged fierce weather. Protesters who had been showing some signs of burnout immediately stormed the state Capitol. And with polling in Wisconsin indicating a significant majority disapproved of Walker's agenda, it seems likely that efforts to recall state Senate Republicans will get a big boost.

Of course, on another level, the analogy is completely ridiculous. The White House and congressional Democrats pushed through a bill that expands healthcare for Americans and is the first significant attempt in decades by either party to reduce the relentless rise of healthcare costs in America. Comparing that with a brazen attempt to crush a political opponent while using a bogus budget-balancing rationale is dubious, at best.

But, of course, partisans will disagree on this point. Conservatives are no doubt cheering the resolve of Wisconsin Republicans right now, just as many liberals cheered the passage of healthcare reform, even as they warily eyed the polling numbers. If you've got a majority, you might as well use it. What else would be the point?

What comes next? FireDogLake's David Dayen does a great job gaming out the immediate future. Of particular interest is a state Supreme Court election in just three weeks that could change the balance of power on the court. Since there are certain to be legal challenges to both the substance of the new bill and the manner it which it was passed, that election will undoubtedly be hotly contested.

But the beauty of this whole struggle is that ultimately, lawyers and judges won't make the final call. The people will decide. The Democratic state senators who fled Wisconsin and created the space for popular opposition to Walker's bill to flourish took a big risk. They broke the normal rules of politics, and there was no certainty that the public would ratify their decision. They could have just been dismissed as sore losers. And they still might be. But we'll see -- the momentum for recall elections for both Democratic and Republican state senators seems unstoppable. Gov. Walker pulled a power move on Wednesday, but the people still get to choose who wins in the end.