Shocking video from the Japan earthquake 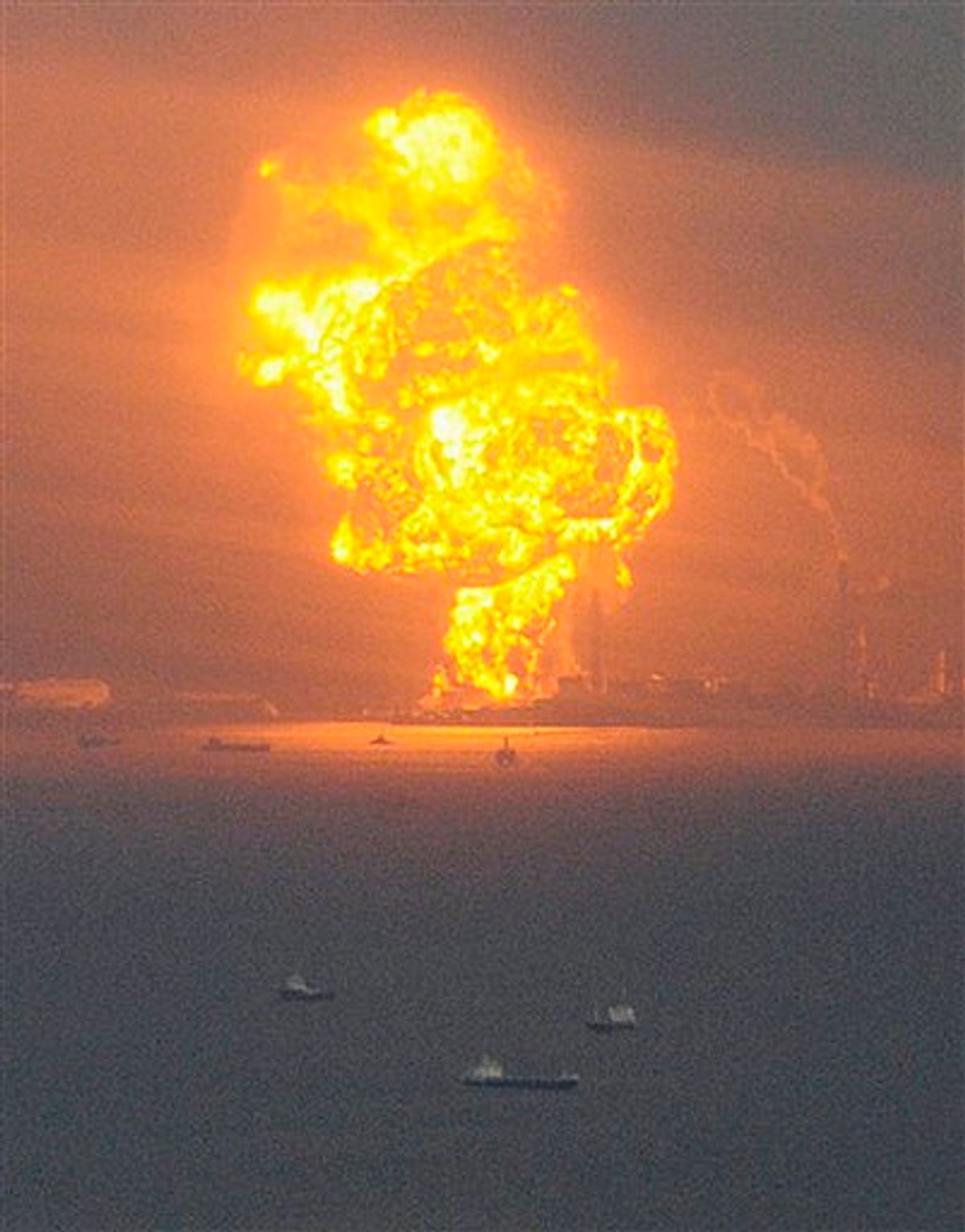 An 8.9-magnitude earthquake struck off the eastern coast of Japan causing a tsunami nearly 25 feet high to slam into the island nation. A series of aftershocks numbering in the dozens and most of them at 6.0 magnitude or higher rattled the nation in the hours following the initial quake. Damage in certain areas can only be described as catastrophic. We'll be adding photos and videos of the earthquake and aftermath as the day continues.

UPDATE -- Aftermath footage (5:43 P.M. EST, 03/14/2011)
Rescuers and journalists alike a patrolling the areas affected by the tsunami. With just one or two buildings remaining in Minamisanriku, the sheer scale of destruction is apparent:

Channel 4 News took a closer look at the city of Kesennuma, the site depicted in a much-viewed video showing the ground level perspective as the tsunami swept through the city streets.

UPDATE -- New footage from Sendai airport (2:45 P.M. EST, 03/14/2011)
More amateur video shot from the interior of the Sendai airport during the tsunami shows relative calm inside of the building while the tsunami destroyed the exterior:

Another amateur videographer caught the earth tearing open in the hours after the initial quake and aftershocks:

UPDATE  -- Videos show extent of devastation (1:25 P.M. EST, 03/14/2011)
Residents emerged from their shelters over the weekend to being surveying the damage. According to one woman, local governments are either unable or unwilling to help so she has begun rebuilding herself:

This collection of shots shows unidentified blocks of destruction as well as an aerial view of what appears to be the Sendai airport. Note the fighter jets picked up by powerful tsunami waters and carried into other buildings:

UPDATE --  Views of the tsunami from above (12:38 P.M. EST, 03/14/2011)
This dramatic video shot from high ground over a neighborhood in the Miyagi Prefecture shows houses swept away with some residents narrowly escaping:

Seawalls overflow in the town of Miyako as the tsunami turns a small stream into a raging black wall of water:

Footage from the Tokyo Broadcasting System shows an alarming series of moments when the tsunami takes over what appears to be a parking lot. The cars looks like rubber ducks when carried away by the powerful force of the water:

UPDATE -- Large scale destruction caught on tape (11:05 A.M. EST, 03/14/2011)
More and more dramatic footage of the tsunami impact appeared online over the weekend. Some of the most disturbing shows water turn from a trickle down the streets to a torrent of destruction that carries away cars and houses. This video reportedly shows a neighborhood in Kesennuma destroyed in a matter of minutes:

This aerial video shows the tsunami speeding through the water before slamming into land and overtaking farm:

UPDATE -- An insider's look at the quake (5:47 P.M. EST)
This video of an open supermarket during the earthquake provides a unique perspective on the chaos of the quake:

For the future, here's a tsunami survival guide.

The next stops for tsunamis include Easter Island and other locations in Chile, while aftershocks continue to shake Japan. The severity of the more severe aftershocks -- at least two aftershocks have been recorded at a 6.6 and 7.1 magnitude -- are individually comparable with other catastrophic earthquakes in recent past. (The Christchurch, New Zealand earthquake was only a 6.3 on the Richter scale.)

Here are a few more interesting updates, including broader coverage of the science of earthquakes and the United States' preparedness.

UPDATE -- Powerful aftershocks continue (2:49 P.M. EST)
A magnitude 6.6 earthquake has struck central Japan, and while seemingly an aftershock, any quakes above 6.6 on the Richter scale is considered an earthquake. Building swayed in Tokyo, but there were no immediate reports of damage.

Meanwhile, a cruiseship and bullet train have gone missing accounting for potentially 400 missing persons. The BBC reports that the 8.9 magnitude earthquake is reportedly the strongest in that area in hundreds of years:

The 8.9-magnitude earthquake which struck Japan on Friday was the strongest in the area in nearly 1,200 years, David Applegate, a senior science adviser at the US Geological Survey, tells the Associated Press. He says the quake ruptured a patch of the earth's crust 240km (150 miles) long and 80km (50 miles) across.

UPDATE 1:43 P.M. EST:
A tsunami overtakes the Kuwagasaki neighborhood in Miyako, about 125 miles northeast of Sendai and knocks houses off of their foundations:

Despite such overwhelming destruction, the New York Times reports that thanks to strict building codes and the best technology "no country may be better prepared to withstand earthquakes than Japan." The video below shows the swaying buildings equipped with sophisticated systems to absorb the impact of seismic shifts:

UPDATE 12:58 P.M. EST:
President Obama announced the U.S. response to the earthquake in Japan just a few minutes ago:

In addition pledging assitance to the Japan -- including sending an additional aircraft carrier to Japan and also helping to supply the coolant to the damaged nuclear power plant -- President Obama assured the press that the government had taken all necessary steps to respond to the tsunami on the West Coast:

Here in the United States, there hasn't been any major damage so far. But we are taking this very seriously and we are monitoring the situation very closely. FEMA is fully activated and is coordinating with state and local officials to support these regions as necessary. Let me just stress: if people are told to evacuate, do as you are told.

Today's events remind us how fragile life can be. Our hearts go out to our friends in Japan and across the region, and we are going to stand with them as they recover and rebuild after this tragedy.

UPDATE 12:19 P.M. EST:
More details are being released by international news organizations. Here are the latest headlines and links to full coverage:

Travel in and around Japan is frozen. According to MSBC's live coverage, drivers have been stuck in gridlock on the high ways in Tokyo for six hours or more. US-Airways flights going into and out of the country have been cancelled.

UPDATE 11:23 A.M. EST:
The West Coast is bracing for the tsunami that's been travelling across the world from Japan at the speed of an airplane. The first waves hit the Oregon Coast just a few minutes ago. According to the Associated Press, the impact so far is minimal:

HONOLULU — The first waves from a tsunami caused by a Japanese earthquake have reached the U.S. mainland along the Oregon coast.

The National Weather Service says some of the biggest waves of between 6 and 7 feet were expected to hit near Crescent City, Calif.

In Alaska, the tsunami caused a wave just over 5 feet at Shemya in the Aleutian Islands 1,200 miles southwest of Anchorage.

Surfers in Southern California are hoping to catch a wild ride when the waves hit.

UPDATE 10:30 A.M. EST:
According to the United State Geological Survey, the earthquake in Japan could be the fifth largest in recorded history, comparable to last year's disaster in Chile but not as strong as the 1952 quake in Kamchatka off the eastern coast of Russia:

UPDATE 10:14 A.M. EST:
Google's Person Finder is now live, in case you have loved ones in Japan -- access it below.

One of the more alarming videos, shows a torrent of debris and fire overtaking a field. You can see entire houses and cars being carried by the powerful mass of water:

UPDATE 9:57 A.M. EST:
Rescue efforts are underway across Japan as it nears midnight. As tsunami waters have receded, fires are a significant concern. Already, Japan has seen major explosions near oil refineries:

Another video of oil refinery explosions:

From earlier, the tsunami sweeps over an airport in Sendai:

UPDATE 9:29 A.M. EST:
A tsunami is wrapping around the Hawaiin Islands at the moment. The waves so far have been larger than normal, though not destructive. Here's a live video feed from CBS News from Honolulu:

UPDATE 8:49 A.M. EST:
Authorities report 200 to 300 bodies litter the shores of Sendai, Japan after the worst of the tsunami has receded. The death toll is expected to rise throughout the day as rescue workers sift through the damage.

Meanwhile, workers at the Fukushima nuclear power plant are on alert after a precautionary evactuation near the plant. With electricity disruptions, workers worried that they would not be able to keep the cooling system in operation.

On-the-ground video of the earthquake -- likely an aftershock -- in Japan:

This video from Sendai shows men at work when the earthquake hits as well as a shocking view of cars floating down a river after the tsunamis:

More cars swept away by a tsunami in Japan: