Tsunami sweeps 5 to sea, one man missing in California 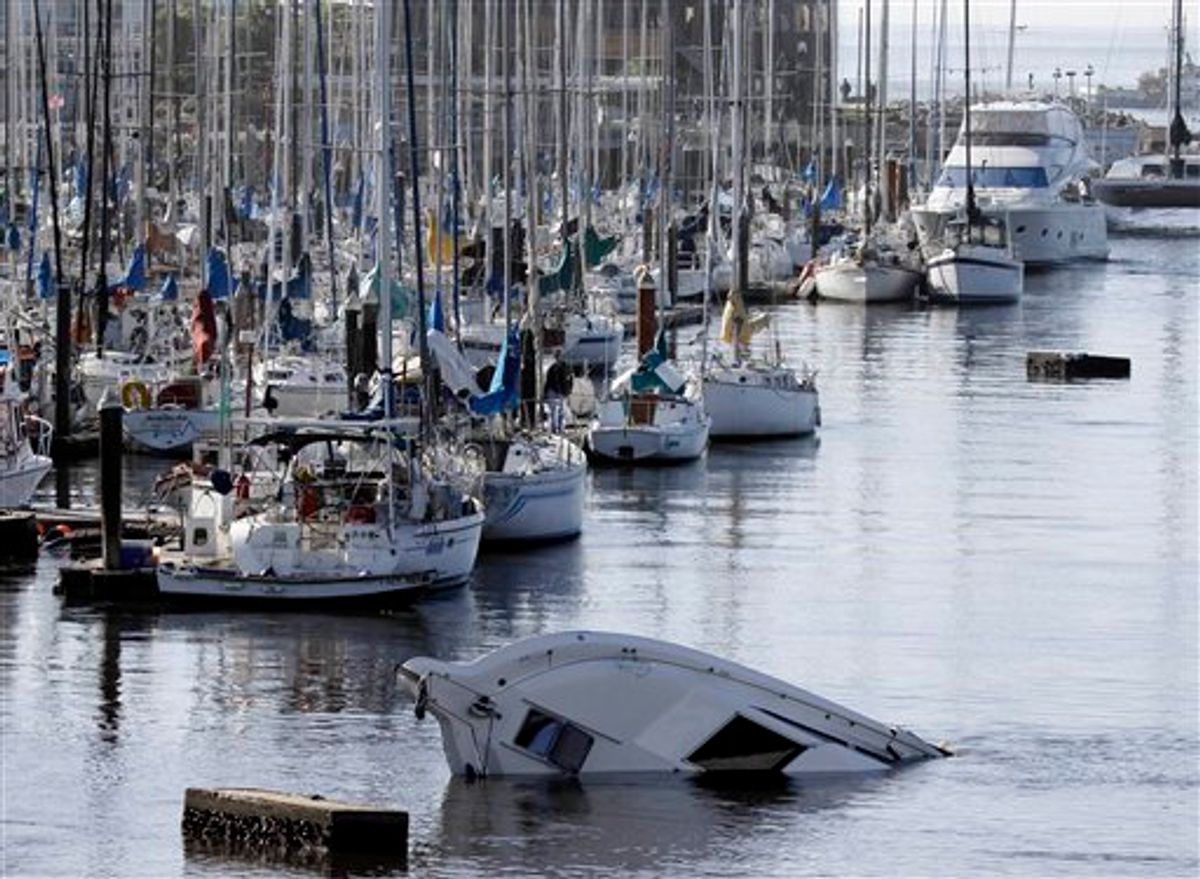 A boat sinks into the ocean in the aftermath of the surge caused by a tsunami on the harbor in Santa Cruz, Calif., Friday, March 11, 2011. A ferocious tsunami unleashed by Japan's biggest recorded earthquake slammed into its eastern coast Friday, killing hundreds of people as it carried away ships, cars and homes, and triggered widespread fires that burned out of control. Hours later, the waves washed ashore on Hawaii and the U.S. West coast, where evacuations were ordered from California to Washington but little damage was reported. The entire Pacific had been put on alert _ including coastal areas of South America, Canada and Alaska _ but waves were not as bad as expected. (AP Photo/Marcio Jose Sanchez) (AP)
--

A tsunami swept at least five people watching the waves out to sea Friday and ripped docks out of harbors in California, spreading the destruction of a devastating Japanese earthquake to the shores of the United States.

Four people were rescued from the water in Oregon, but one man who was taking photos in Northern California was still missing Friday afternoon. Coast Guard helicopters searched for him near the mouth of the Klamath River in Del Norte County, Calif., after his two friends made it back to shore.

About 25 miles north, four people were swept off a beach north of Brookings, Ore. Two got out of the water on their own and the others were rescued by law enforcement and fire officials.

A man was found dead aboard a commercial vessel in Brookings, but sheriff's officials said it appeared to be from natural causes.

The large waves shook loose boats in that weren't moved in time and tore apart wooden docks in at least two California harbors.

"This is just devastating. I never thought I'd see this again," said Ted Scott, a retired mill worker who lived in Crescent City when a 1964 tsunami killed 17 people on the West Coast, including 11 in his town. "I watched the docks bust apart. It buckled like a graham cracker."

The waves didn't make it over a 20-foot break wall protecting the rest of the city, and no home damage was immediately reported.

Damage estimates in Crescent City were in the millions, and more boats and docks were hit in Santa Cruz on California's central coast. Surges are expected throughout the afternoon.

President Barack Obama said the Federal Emergency Management Agency is ready to come to the aid of any U.S. states or territories who need help.

Earlier, the tsunami hit Hawaii before dawn, rushing up on roadways and into hotel lobbies on the Big Island and low-lying areas in Maui were flooded as 7-foot waves crashed ashore.

Scientists warned that the first tsunami waves are not always the strongest, and officials said people in Hawaii and along the West Coast should remain vigilant. Tsunami warnings continued in California and Oregon, but were downgraded to an advisory in Hawaii, and Gov. Neil Abercrombie said the islands were "fortunate almost beyond words."

"All of us had that feeling that Hawaii was just the most blessed place on the face of the Earth today," he said.

The tsunami, spawned by an 8.9-magnitude earthquake in Japan, killed hundreds as it slammed the eastern coast of Japan, sweeping away boats, cars, homes and people as widespread fires burned out of control. It raced across the Pacific at 500 mph -- as fast as a jetliner -- before hitting Hawaii and the West Coast. Sirens sounded for hours on the islands and the West Coast before dawn and roadways and beaches were mostly empty as the tsunami struck.

It is the second time in a little over a year that Hawaii and the U.S. West coast faced the threat of a massive tsunami. A magnitude-8.8 earthquake in Chile spawned warnings on Feb. 27, 2010, but the waves were much smaller than predicted and did little damage.

Scientists then acknowledged they overstated the threat but defended their actions, saying they took the proper steps and learned the lessons of the 2004 Indonesian tsunami that killed thousands of people who didn't get enough warning.

This time around, the warning went out within 10 minutes of the earthquake in Japan, said Gerard Fryer, a geophysicist for the Pacific Tsunami Warning Center in Honolulu.

"We called this right. This evacuation was necessary," Fryer said. "There's absolutely no question, this was the right thing to do," he said.

The warnings issued by the tsunami center covered an area stretching the entire western coast of the United States and Canada from the Mexican border to Chignik Bay in Alaska.

Many islands in the Pacific evacuated, but officials later told residents to go home because the waves weren't as bad as expected.

In Guam, the waves broke two U.S. Navy submarines from their moorings, but tug boats corralled the subs and brought them back to their pier. No damage was reported to Navy ships in Hawaii.

In the Canadian pacific coast province of British Columbia, authorities evacuated marinas, beaches and other areas.

Officials in two coastal Washington counties used an automated phone alert system, phoning residents on the coast and in low-lying areas and asking them to move to higher ground.

"We certainly don't want to cry wolf," said Sheriff Scott Johnson of Washington's Pacific County. "We just have to hope we're doing the right thing based on our information. We don't want to be wrong and have people hurt or killed.

In Oregon, hotels were evacuated and shops stayed shuttered in the northwest tourist town of Seaside, where arcades, salt-water taffy shops and seafood restaurants line a beachfront boardwalk.

Large waves didn't materialize, and by noon coastal residents were expected to be able to return home.

"We weren't really worried about it," said Erik Bergman, whose roommate woke him early Friday.

Latin American governments ordered islanders and coastal residents to head for higher ground. Coastal officials from Mexico to Chile were hauling boats from the sea, closing ports and schools and preparing to evacuate thousands of people ahead of the tsunami's expected arrival at 5 p.m. EST.

Heavy swells rolled through ports and marinas of Mexico's Baja California resort of Cab San Lucas, and the major Pacific cargo port of Manzanillo was closed. Several cargo ships and a cruise ship decided to wait out a possible tsunami at sea rather than risk possible damage in a harbor.

The Honolulu International Airport remained open but seven or eight jets bound for Hawaii turned around, including some originating from Japan, the state Department of Transportation said. All harbors were closed and vessels were ordered to leave the harbor.

About 70 percent of Hawaii's 1.4 million population resides in Honolulu, and as many as 100,000 tourists are in the city on any given day.

A small 4.5-magnitude earthquake struck the Big Island just before 5 a.m. EST, but there were no reports of damages and the quake likely wasn't related to the much larger one in Japan, the USGS said.