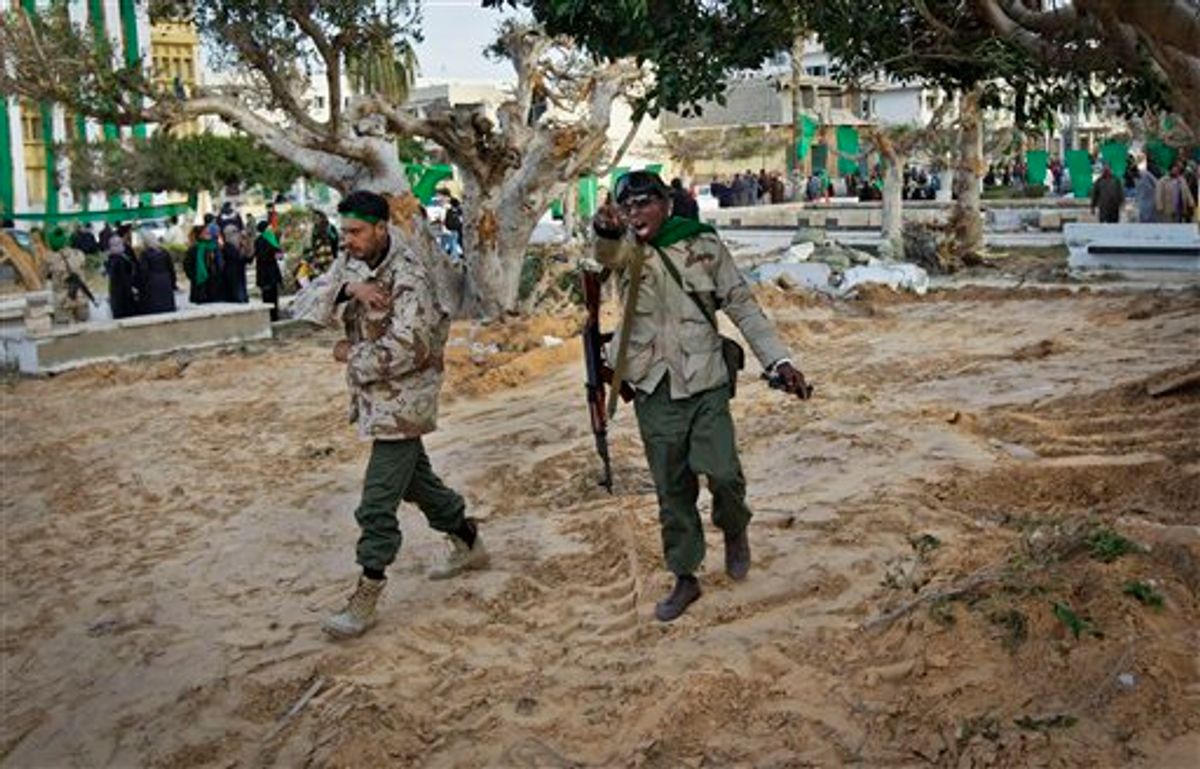 In this photo taken during a government-organised visit for foreign media, a pro-Gadhafi soldier mimics a gun with his hand as he and another walk across freshly-bulldozed ground from which the bodies of opposition dead had been exhumed, according to a resident, in the main square of Zawiya, Libya Friday, March 11, 2011. Libyan Leader Moammar Gadhafi's regime has gained momentum with the capture of Zawiya after days of fierce fighting with rebels, in a key test of the government's ability to maintain its hold on the Libyan capital and surrounding areas. (AP Photo/Ben Curtis) (AP)
--

Moammar Gadhafi's regime showed growing confidence Friday after retaking a strategic near Tripoli following days of relentless shelling against protesters-turned-rebels as it strengthened its hold on the capital and surrounding areas.

Government forces also captured a key oil town in the east and fought to dislodge rebels who took refuge among towering storage containers of crude oil and gas in nearby facilities.

Zawiya's main square, which had been a key center of resistance to the west of the capital, bore the scars of battle and the streets were lined with tanks as loyalists waving green flags rallied amid a heavy presence of uniformed pro-Gadhafi troops and snipers. There was talk of rebel bodies having been bulldozed away, and the dome and minaret of the nearby mosque were demolished.

With Gadhafi's men also on the march against rebels in the east, Western nations appeared in disarray over how to stop the bloodshed.

President Barack Obama said a no-fly zone over Libya to protect the civilian population from the Gadhafi regime's fighter jets remains a possibility as "we are slowly tightening the noose" around Gadhafi, but he stopped short of moving toward military action.

He cited actions already taken, including getting American citizens and embassy workers out of the country, slapping tough United Nations sanctions on Libya and seizing $30 billion in Gadhafi's assets.

The European Union, meanwhile, said a no-fly zone would need diplomatic backing from international organizations like the Arab League, which was to discuss situation in Libya on Saturday in Cairo.

The capture of Zawiya, a coastal city of about 200,000 people that is located near an oil port and refineries, seals off a corridor around the capital and solidifies the government's control over the western third of the country to the border with Tunisia. The government still faced a rebel challenge in Misrata, Libya's third-largest city, 125 miles (200 kilometers) southeast of Tripoli.

The government had claimed victory in Zawiya, 30 miles (50 kilometers) west of Tripoli, on Wednesday, but the rebels who are seeking to oust Gadhafi said fighting was ongoing.

An Associated Press reporter, who was taken by the government with other journalists into the city on Friday, said the city was clearly in government control, with Libyan soldiers manning tanks and trucks mounted with anti-aircraft guns.

Grim evidence of battle was everywhere. A makeshift clinic that had been set up inside the mosque to treat the injured was destroyed and the floor was covered with rubble, shoes and glass while the roof was punctured with a large hole where the dome had been.

The facades of buildings, including banks and hotels overlooking Martyrs' Square, were devastated, the streets were strewn with shattered glass and several palm trees had been burned or uprooted.

A 43-year-old government employee said the shelling of the city started on Friday and was nonstop until Wednesday, the day the government claimed victory.

"Many people were killed on Friday. The youth were marching in the square," he said. "I don't know whom to blame -- the leader, the son of the leader, the government or the rebels. It was peaceful. I don't know why this happened. I never imagined that I would see Zawiya, my hometown, like this."

He said at least 24 of the protesters had been buried in the square but the pro-Gadhafi forces had used bulldozers to remove their bodies. The claim couldn't be independently verified, although the area was flattened.

Anti-Gadhafi graffiti that had covered walls during a previous visit by the AP also had been painted over. Green flags and pictures of Gadhafi were wrapped around some buildings.

Zawiya's fall to the opposition about a week into the uprising that began Feb. 15 illustrated the initial, blazing progress of the movement that started with protests in the east and escalated into an armed rebellion. But Gadhafi has seized the momentum, battering opponents with airstrikes and artillery fire.

Salem Gnan, a member of the Libyan opposition-in-exile, insisted activists would fight back.

"The youths are determined to return to the city and attack again," he said in a telephone interview from London.

A heavy crackdown by pro-Gadhafi militiamen also apparently has succeeded in stifling attempts at protests in the capital.

Inspired by the ouster of leaders in Egypt and Tunisia, Gadhafi's opponents have attempted to hold protests every Friday for the past few weeks, but they have been met each time by a fierce retaliation from militiamen and no attempts were reported on Friday.

Gadhafi's government sent a text message to Tripoli residents warning imams at mosques against allowing protests after Friday prayers. The message quoted Saudi cleric Sheik Saleh Fawzan, a member of the Saudi Supreme Scholars Council, as saying it was "unacceptable" for any imam "who incites people (or) causes disturbances of the society in any mosque."

In Tripoli's Tajoura district -- scene of some of the heaviest past protests -- police deployed in significant numbers outside the main local Murad Agha mosque to prevent marches after prayers. The main road from Tajoura to downtown was blocked by repeated checkpoints.

Pro-Gadhafi forces also appeared to be turning the tide in the country's east, bottling up a ragtag force of rebels at a key oil port in a powerful offensive as the conflict is increasingly shaping into a potential civil war.

Despite the onslaught with heavy weaponry, rebel fighters said they were determined to push forward.

"The will of the people is stronger than any weapon," said rebel commander Ahmed Jibril, manning a checkpoint on the western edge of Brega, the nearby site of a major oil terminal. "Our morale is high and, God willing, we will go all the way to (Tripoli's) Green Square."

The rebels seemed to have a tenuous hold around the oil facilities at Ras Lanouf. Government forces stopped directing their fire at those positions, apparently to avoid blowing up the facility's infrastructure, according to fighters.

Instead, the pro-Gadhafi troops, positioned in Ras Lanouf's residential area east of the oil port across a barren desert no-man's-land, were raining rockets and shelling along the main coastal highway, targeting rebel vehicles trying to reinforce and bring supplies to the port, said Mohammed Gherani, a rebel fighter.

At least five rebels were killed and 27 wounded in the Ras Lanouf fighting on Friday, said Dr. Gebriel Hawadi of the opposition's Medical Committee in the eastern city of Benghazi. That raised the toll from two days of battles in the area to 13.

The regime has struck back with an overwhelming force, backed by warplanes, artillery, rockets and tanks, that over the past few days pushed the rebels back to Ras Lanouf, 380 miles (615 kilometers) southeast of Tripoli. It's a major blow to opposition forces who just a week ago held the entire eastern half of the country and were charging along the Mediterranean coast westward, trying to push toward the capital.

The rebel force at the Ras Lanouf front appeared thinner Friday, perhaps a sign they had yet to regroup from Thursday's blow. The core of the opposition port holding out at the oil facilities appeared to be the more disciplined soldiers from army units that defected and joined the uprising.

The assault on Ras Lanouf was a sign the Gadhafi camp had regrouped after it first seemed to reel in confusion for the much of the uprising. Gadhafi's son Seif al-Islam vowed Thursday to retake the eastern half of the country.

Ahmed bin Helli, the Arab League's undersecretary general, said a no-fly zone proposition was on the agenda for Saturday's emergency meeting. Member states, however, were divided over how to deal with the Libyan crisis, signaling it would be a tough debate.

European Union leaders holding an emergency summit on Libya failed to agree on military action or a no-fly zone but embraced Libya's opposition group as a viable partner after cutting all contact with Gadhafi.

"If we don't sort out the current problems, the risk is ... a failed pariah state festering on Europe's southern border threatening our security," British Prime Minister David Cameron said.