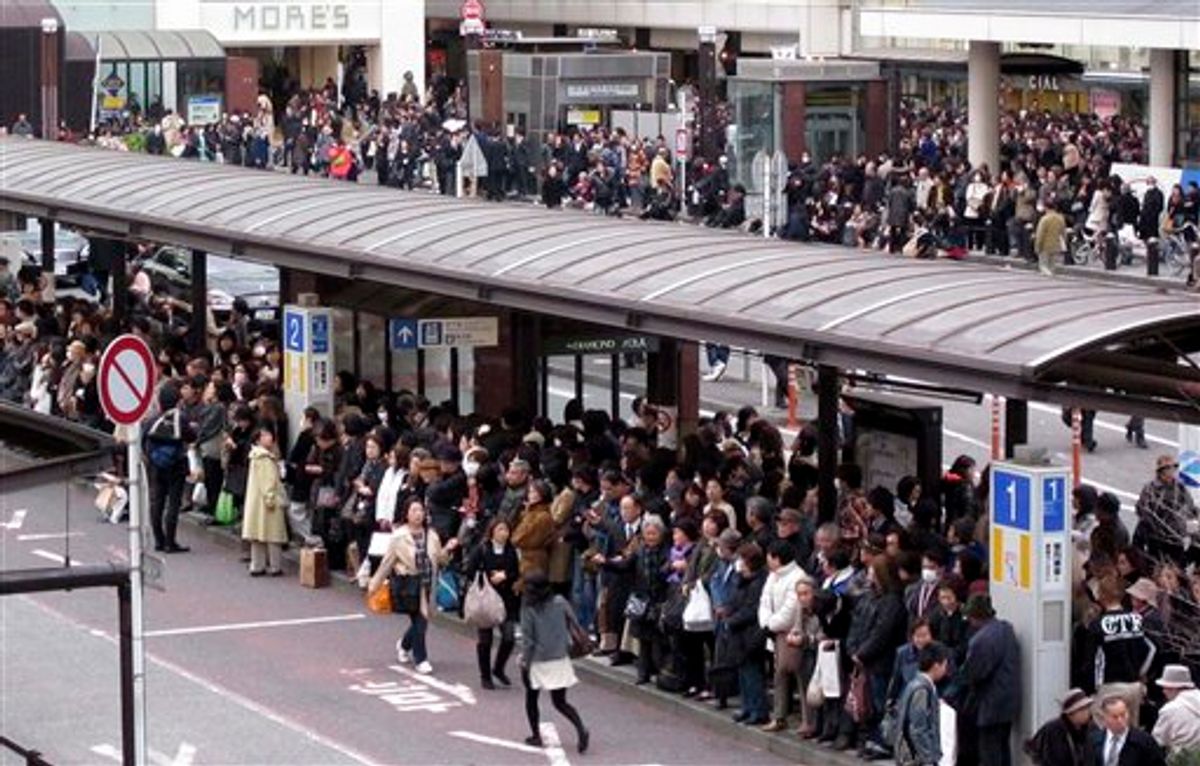 The magnitude-8.9 quake off Japan's northeastern coast shook buildings in the capital, left millions of homes across Japan without electricity, shut down the mobile phone network and severely disrupted landline telephone service. It brought Tokyo's train system to a halt, choking a daily commuter flow of more than 10 million people.

"This is the kind of earthquake that hits once every 100 years," said restaurant worker Akira Tanaka, 54.

He gave up waiting for trains to resume and decided -- for his first time ever -- to set off on foot for his home 12 miles (20 kilometers) north of the capital. "I've been walking an hour and 10 minutes, still have about three hours to go," he said.

Tokyo prides itself on being an orderly, technologically savvy, even futuristic city. Residents usually can rely on a huge, criss-crossing network of train and subway lines, but authorities were forced to scan the entire web for quake damage and canceled nearly all train service for the day.

Tens of thousands of people milled at train stations and hunkered down at 24-hour cafes and hotels.

Mobile phone lines were crammed, preventing nearly all calls and text messages. Calls to northeastern Japan, where a 23-foot (7-meter) tsunami washed ashore after the quake, generally failed to go through, with a recording saying the area's lines were busy.

Osamu Akiya, 46, was working in Tokyo at his office in a trading company when the quake hit. It sent bookshelves and computers crashing to the floor, and cracks appeared in the walls.

"I've been through many earthquakes, but I've never felt anything like this," he said.

Japan's top telecommunications company Nippon Telegraph and Telephone Corp. set up an emergency phone line and a special Internet site for people to leave messages for family and friends.

Up to 90 percent of calls were being restricted to prevent telecom equipment from being overloaded, NTT spokeswoman Mai Kariya said. The company was checking on damage to towers and cables, and details were not immediately available.

Tokyo commuter trains and subways, as well as the superfast bullet trains, all shut down, according to East Japan Railway Co. A handful of subway lines resumed service, but only after six hours.

Normally when Tokyo trains suffer rare problems, they are running again within an hour. But the railway company announced that nearly all service would not resume for the rest of the day, sending crowds that were milling at train stations pouring into the streets.

The Tokyo suburb of Yokohama offered the community's main concert hall as an emergency place to stay overnight, and planned to offer blankets and other amenities, Yokohama Arena official Hideharu Terada said.

"There has never been a big earthquake like this, when all the railways stopped and so this is a first for us," Terada said. "People are trickling in. They are all calm."

In downtown Tokyo, Tomoko Suzuki and her elderly mother stood at a crowded corner, unable to get to their 29th-floor condominium because the elevator wasn't working. They unsuccessfully tried to hail a taxi to a relative's house and couldn't find a hotel room.

Associated Press writers Yuri Kageyama and Tomoko A. Hosaka contributed to this report.