The figure, which includes sales to Libya and Egypt, shows a $6 billion increase over the previous year 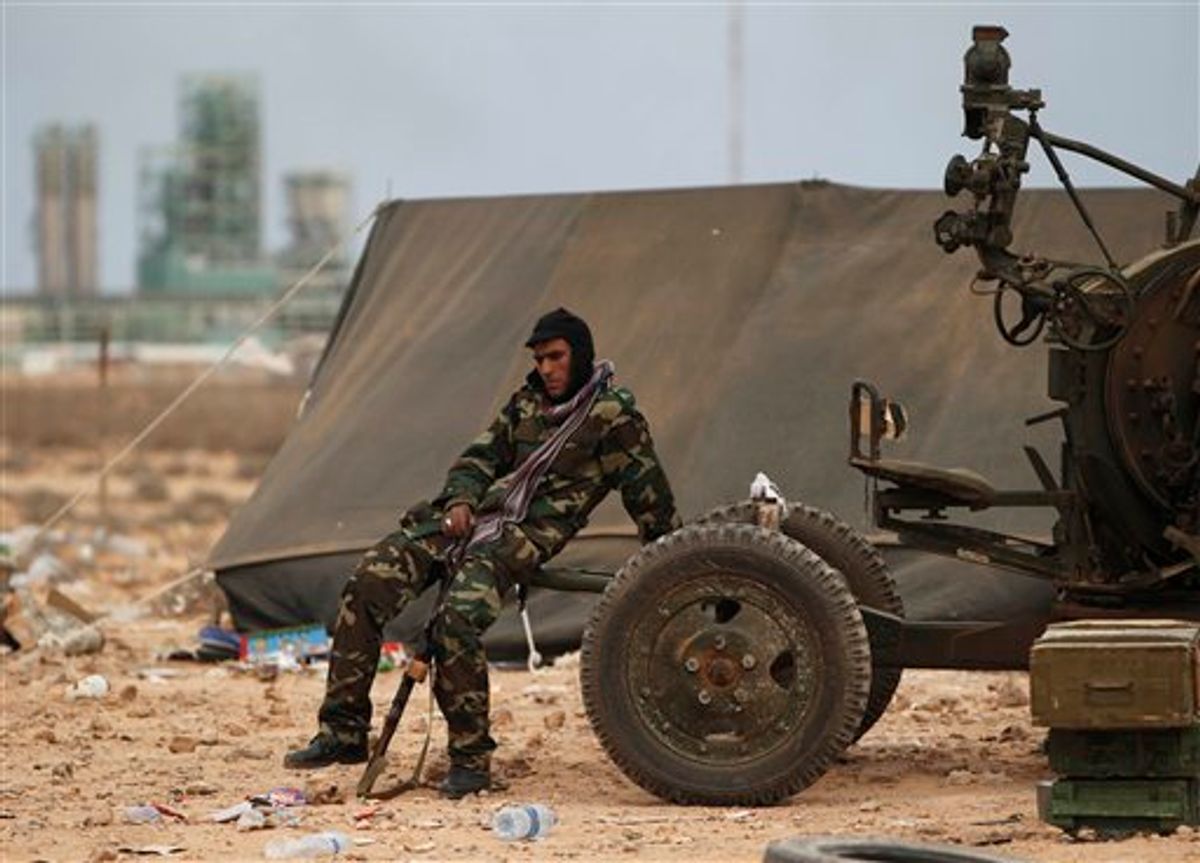 A Libyan volunteer sits near a weapon on the outskirts of the eastern town of Ras Lanouf, Libya, Thursday, March 10, 2011. Government forces drove hundreds of rebels from a strategic oil port with a withering rain of rockets and tank shells on Thursday, significantly expanding Moammar Gadhafi's control of Libya as Western nations struggled to find a way to stop him. (AP Photo/Tara Todras-Whitehill) (AP)
--

The U.S. government approved $40 billion in worldwide private arms sales in 2009, including more than $7 billion to Mideast and North African nations that are struggling with political upheaval, according to newly released government figures.

From 2008 to 2009, the U.S. authorized increasing sales of military shipments to the now-toppled Egyptian government of Hosni Mubarak and the embattled kingdom of Bahrain. But the U.S. reduced its defense sales approvals in 2009 to Moammar Gadhafi's Libyan government, which is now under a blanket weapons ban imposed last month by the Obama administration.

The latest figures describe sales of military hardware from missile systems to bullets that the State Department authorizes from private U.S. defense companies to other countries. The figures do not include direct U.S. military aid to other nations, providing a limited snapshot of the ebb and flow of American arms abroad. The figures also detail only proposed sales -- not actual shipments.

The new numbers issued in a report from State's Directorate of Defense Trade Controls indicate that international sales sought by U.S. defense firms have surged in the last two years after holding steady for most of the 2000s in the range of $20 billion. And the report's details show the willingness of the Obama administration, like preceding White Houses, to sometimes provide military and crowd-control weaponry to regimes with little popular support.

"There's been a general relaxation of restraints on defense trade," said William D. Hartung, Director of the Arms and Security Initiative at the New America Foundation, a non-partisan Washington think tank. "There's a tendency to give industry the benefit of the doubt, instead of being more aggressive in regulating."

Most of the biggest recipients of licensed arms deals in 2009 were U.S. neighbors and allies, among them Japan ($4.5 billion), Britain ($3.4 billion) and South Korea ($1.9 billion). The leader in 2009 was Singapore, with $5.5 billion in approved defense buys -- largely because of a proposed $3.7 billion sale of American aircraft, supplies and logistics support. The State Department figures do not describe details of the sale, but Singapore has made repeated buys of U.S. F-15 fighter jets in recent years, totaling 24 jets.

The $7.3 billion in U.S.-approved defense sales to Mideast and North African countries in 2009 totaled up to nearly a fifth of the entire $40 billion in licensed sales -- indications of both the region's strategic importance and their governments' willingness to pay top dollar for American defense equipment. Iraq, where U.S. forces are still drawing down and the fledgling government is struggling against militants, was the biggest buyer ($1.51 billion), closely followed by Turkey ($1.50 billion) and the United Arab Emirates ($1.09 billion).

U.S.-approved sales to Libya dropped in 2009, to $15 million from $46 million in 2008. All Libyan sales were restricted to non-lethal equipment. Almost all of the equipment approved in 2009 were aircraft parts, compared to more than $1 million that had been approved in 2008 for explosives and incendiary agents. State Department spokesman Mark C. Toner said earlier this week that the explosives were limited for use in oil exploration, but other officials raised concerns that the material could be converted into crude battlefield munitions.

The AP reported earlier this week that the State Department had also green-lighted a $76.7 million deal in 2009 that would have upgraded at least 50 old U.S.-built armored troop transports for the Libyan army. The deal -- not detailed in the latest figures -- stalled in Congress, bogged down by concerns that it would improve the mobility of Gadhafi's forces. Last week, State Department officials notified congressional committees that the deal was now off the table.

The new State figures also detailed sales of U.S. defense items for Egypt ($101 million) and Bahrain ($88 million). The figures show $458,000 in tear gas sales licensed to Egypt, where there were numerous reports that U.S.-supplied crowd control gas suppressed democracy protesters in Cairo. The U.S. authorized $18,000 in tear gas for Bahrain in 2008, but did not license it in 2009, the figures show. Both countries were also authorized shipments of firearms, shotguns and close assault weapons.

Hartung questioned whether the U.S. was lax providing such weaponry and crowd-control devices to authoritarian regimes.

"Some of these countries have very serious records of human rights abuses that are being overlooked in deference to other aspects of their relationship with the U.S.," Hartung said. "When you're selling something like tear gas, what's it going to be used for? Dissenters, most likely."

Other defense experts cautioned that other countries would quickly move to replace the U.S. in any arms sales stopped for human rights concerns. Matthew Schroeder, an arms expert with the Federation of American Scientists, pointed to a massive surge of $470 million in armaments to Libya by European nations while the U.S. held back.

"If you cut off arms sales, a client would go straight to U.S. competitors like Russia or China," he said, adding that American monitoring of private defense sales is more systematic than most other nations.

State officials say the department is scrutinizing the proposed defense sales as part of an ongoing review process.