The GOP is fanatical about "traditional marriage." But among its White House prospects, the divorce rate is soaring 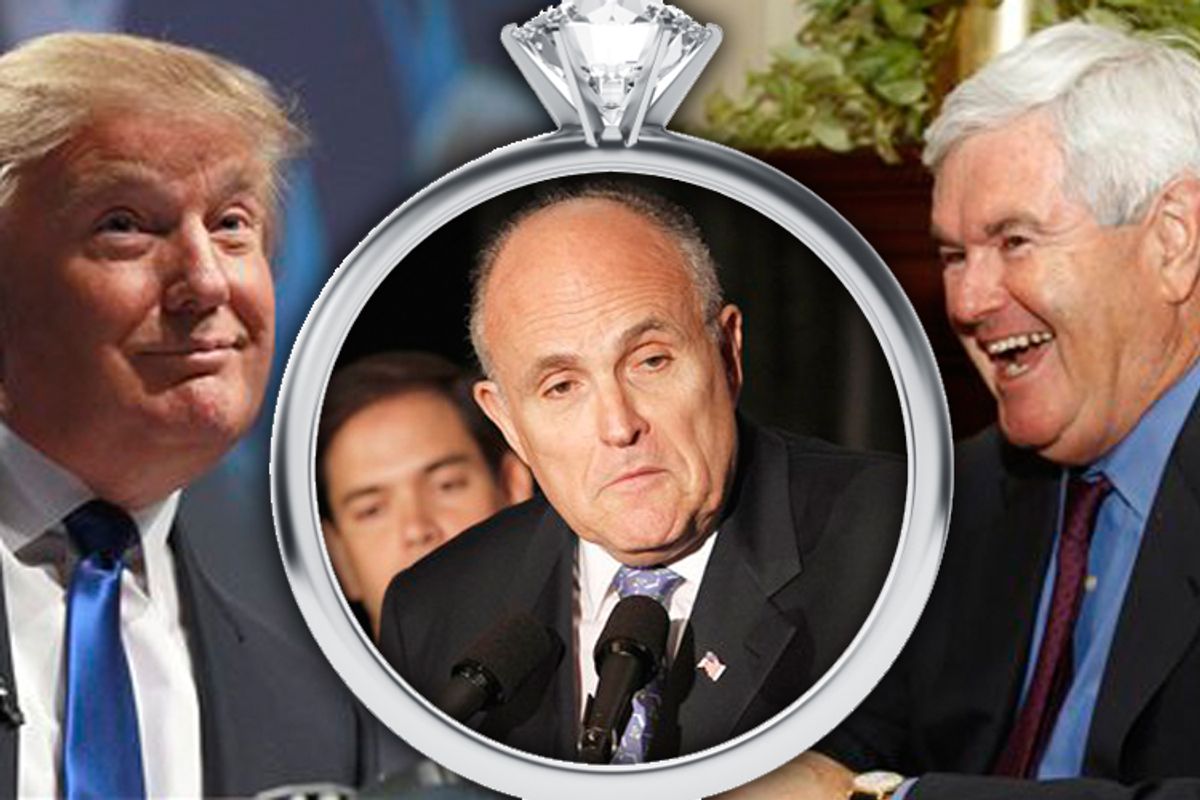 As he has inched toward a full-fledged presidential bid, Newt Gingrich has been scrambling to explain away his two divorces and three marriages. The story he offered up this week -- that some combination of patriotism and a strong work ethic led him to stray from his second wife in the mid-1990s (just as he was leading a drive to impeach President Clinton over an affair) -- surely didn't help matters.

Gingrich, of course, is just one of many likely Republican candidates seeking to curry favor with a Republican Party base that is filled with religious conservatives -- often by voicing loud support for "traditional marriage." He's also one of four GOP prospects who has enjoyed three "traditional marriages" in his life. Indeed, an unusually high wives-to-candidate ratio may be the most remarkable feature of the emerging Republican field: For our data pool, we considered Republicans who have publicly expressed an interest in running next year or who have engaged in some overt campaign activity (taking part in CPAC or a recent cattle call in Iowa, for instance). Joining Gingrich in the three-timers club are Buddy Roemer, Rudy Giuliani (who insists he's mulling a second run) and Donald Trump.

In recent days, "traditional marriage" has been something of an obsession for the GOP field. Tim Pawlenty declared at a Faith and Freedom Coalition forum in the leadoff caucus state of Iowa this week, "We have people in Washington, D.C., who say marriage will be defined however we feel like defining it. No, it won't! It should be defined as between a man and a woman."

Rick Santorum, meanwhile, recently penned an Op-Ed in the Des Moines Register blasting President Obama for not defending traditional marriage -- "the foundation of every society from the beginning of time." At this week's Faith and Freedom forum, Ralph Reed, the group's national chairman and a one-time leader of the Christian Coalition, declared that "every viable candidate for the Republican presidential nomination supports the Defense of Marriage Act, supports the traditional definition of marriage as being one man-one woman."

Here's a complete accounting of the the pool of candidates we drew on to create the chart. The number in parentheses is how many spouses the candidate had when he or she was in the GOP presidential field. Mike Huckabee and Sarah Palin were not included in 2012 because they have not gone to any of the forums that prospective candidates attend (like CPAC or the event in Iowa this week). Both have been allowed to keep their jobs at Fox News, while the network suspended Rick Santorum and Gingrich while they mull presidential bids.