Can an electric car save the American dream?

The Chevy Volt is cramped, overpriced -- and the best thing an American motor company has done in years 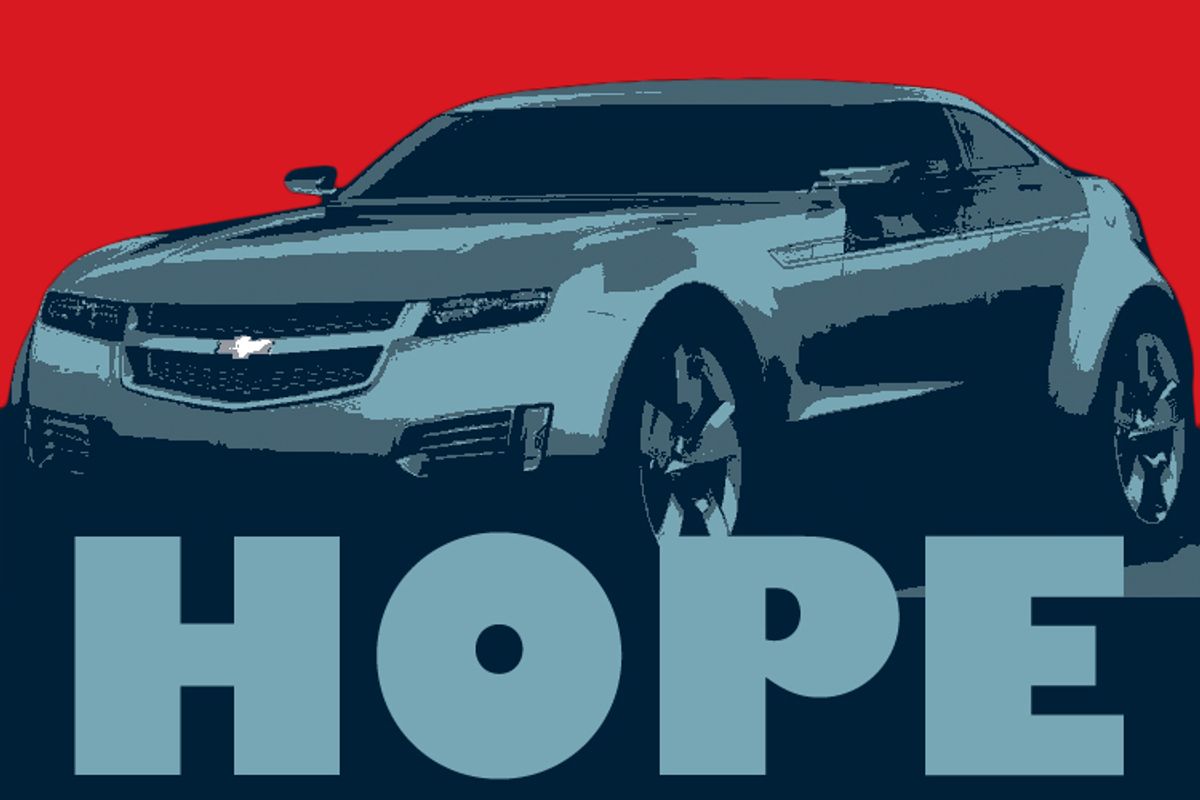 The first time I saw the Volt, Chevrolet's new hybrid electric car, it was only a battery.

It was November 2008, the month that General Motors begged the government for a bailout. I was in a sterile testing room at the GM Tech Center, in Warren, Mich. Andrew Farah, the Volt's chief engineer, handed me a lithium-ion battery, in a plastic sleeve. We both had the same hopes for that flat, rectangular fuel cell. That it was, at last, the technology that would end General Motors' decades of decline.

An hour's drive north of Warren, in Flint, is an abandoned GM auto plant called Buick City. In the 1970s, Buick City employed 28,000 autoworkers. Today, it's America's biggest brownfield, anchoring a neighborhood that also features a boarded-up tavern, a defunct United Auto Workers hall and an out-of-business party store. The land around Buick City is so worthless that a patriotic couple bought several corner lots, for $200 apiece, and built a memorial to American soldiers killed on 9/11.

Buick City and so many other factories are industrial waste sites because General Motors hasn't had an original idea since it put a V-8 engine in the Oldsmobile. In the 1970s, when the Arab Oil Embargo began a small-car craze, Honda was already building the Civic. Toyota was building the Corolla. GM responded with -- the Chevette. Named one of the 50 Worst Cars of All Time by Time magazine, the Chevette turned an entire generation of Americans onto Japanese cars. It was the first car I ever owned. My mechanic diagnosed the hole under the pedals as "Chevette Floor Cancer." He pounded a sheet of tin over the opening, but my shoes still got wet whenever I drove through a puddle.

And then, in the 2000s, there was GM Chairman Robert Lutz's reaction to the Prius: "Hybrids are an interesting curiosity and we will do some, but do they make sense at $1.50 a gallon? No, they do not." They do make sense at $4 a gallon, but Toyota dominates the market now.

That's why I was so excited about the Volt. Like any Michigander who grew up seeing "Assholes Buy Jap Cars" spray-painted on overpasses, I've been conditioned to root for the home team. Now, for once in my life, stodgy old Papa Jimmy was going to be first at something. As Toyota was the hybrid company, Chevy would be the electric company.

"I want that brand right here on top of my forehead," Farah said, pointing at the space above his safety glasses.

Farah worked on GM's first, failed attempt: the EV1, subject of the documentary "Who Killed the Electric Car?" Its problem: the battery weighed 1,200 pounds. To wring 40 miles out of a single charge, the EV1 was a two-seater, with no trunk.

"You had to build the car around the battery," he said.

The lithium-ion battery pack weighs a third of that. The Volt is an "extended-range" vehicle. Once the charge runs down, a gasoline engine takes over. But it doesn't power a drive train, as on a traditional vehicle. It powers the electrical system that runs the car.

The energy required to drive 40 miles on battery power is equivalent to "well under a gallon" of gasoline, Farah told me, because running an electrical system is 50 percent more efficient than running a drive train. Fueling the Volt costs 2 cents a mile. At $4 a gallon, a gasoline-powered car costs 13 cents a mile.

On electric power, the Volt emits no exhaust. Drawing electricity from a coal-powered grid may produce more greenhouse gases than a gasoline-powered car. But coal produces only half America's energy, and that percentage is declining as utilities switch to cleaner fuels. The Volt can draw power "from the wind, from the sun," Farah said. "You don't have to burn fossil fuels." As a plug-in hybrid, the Volt would be a compromise between the Prius, which has a 4-cylinder gasoline engine, and the all-electric Nissan Leaf.

The Volt is finally out this year. It was named 2011 Motor Trend Car of the Year. When I heard that the Volt rides were the No. 1 attraction at last month's Chicago Auto Show, I was more excited than the moment I first laid eyes on the Top Thrill Dragster at Cedar Point. I'd been waiting years to sit inside the salvation of the American auto industry.

When I got to the Auto Show, little pod-shaped cars were circling a go-kart-sized track, landscaped with real grass and real shrubs. The foliage would die indoors, but from lack of sunlight, not air pollution. When a Volt finally stopped, I climbed into the passenger seat. My first reaction?

"Wow, this is even more cramped than my old Dodge Neon." The engine was silent, but I couldn't tell whether that was because we were only going five miles an hour.

"How much is this going to cost?" I asked the driver.

I looked at the back seat. Two American-sized people could squeeze in there. The driver tried to focus my attention on a computer screen displaying the remaining charge.

"Are they ever going to make a bigger version?" I asked.

"There's going to be a family-sized SUV, eventually."

Eventually. I stepped outside and watched the silent rodeo of cars. The Volt is a $20,000 car, for twice the money. Even if I could afford to replace my Ford Focus hatchback with a Volt, I wouldn't do it. It's too small for my cross-country skis and my camping equipment.

Then I got an e-mail from a retired Chevy dealer named Chuck Frank. He forwarded me an article from Automotive & Assembly Practice, which predicted that "plug-in hybrid electric vehicles and battery-only electric vehicles could account for 16 percent of overall new-car sales in New York, 9 percent in Paris and 5 percent in Shanghai by 2015."

"Are you buying a Volt?" I e-mailed back.

"I have one on order and a Leaf as well," he wrote. "I drove one recently and liked it."

Frank is the Volt's target customer: a well-to-do environmentalist. As a boy, Frank wanted to be a forest ranger. Instead, he inherited the world's largest Chevrolet dealership from his father. But Frank's love of the outdoors and his wife's struggles with asthma led him to join the Sierra Club, and he became the group's inside connection to the auto industry. As a Chevy dealer, he could talk to executives who wouldn't take an environmentalist's phone calls. For years, Frank lobbied GM to build an electric car. In 2005, frustrated that he couldn't offer his customers an alternative to the Prius, he approached Chairman Rick Wagoner at a cocktail reception.

"Why isn't GM doing anything about a hybrid?" Frank inquired.

Frank doesn't care that the Volt is cramped and overpriced. He has bigger Chevys in his garage, and he sold enough Corvettes to understand that when it comes to choosing a car, practicality is less important than looking badass. Otherwise, everyone would be driving an Aveo.

"I want to be one of the early adapters," Frank said. "I'm trying to get the first one that comes into Chicago, because I want to reinforce my environmental credentials."

But there aren't enough Sierra Club members to make the Volt a mass-market car yet. My other problem with the Volt: I live in an apartment building, so I have no place to plug it in at night.

"They're not going to make money on the Volt right away," Frank said. "One of the things I said to Wagoner was the value of what they're doing was what Toyota did with the Prius. It's not about profitability per se. It's about image. What I'm hearing is that it's bringing people into the showrooms. They need to do this to re-establish themselves as a high-tech company."

Consumer Reports dismissed the Volt as "an expensive way to be green." NASCAR driver Dale Earnhardt Jr. called the Volt a "good product," but said the "technology isn't there yet really to provide the consumer with something that can go a little further [in mileage] ... But as the technology gets better, batteries and such things like that get safer to where they can be more heavily charged and the mileage can be a little bit longer."

But Volt owner Matt Stehouwer wanted an electric car so badly he ordered one from a dealership in New York, one of seven states where the Volt is currently sold, and drove it home to DeWitt, Mich. After three weeks, he reports on his blog, voltfansite.com, he's driven 627 miles on 4.2 gallons of gas. Stehouwer's only complaint: His employer told him he was "stealing electricity" by charging the car at work.

General Motors just announced it earned $4.7 billion last year, its first profit since 2004. It's not because of the Volt, obviously, but the Volt is another sign that GM has finally learned to do business like a 21st century auto company. It's too late to save Flint, but the Volt is coming off the assembly line in the Detroit suburb of Hamtramck.

Even though the Volt is a tiny, expensive toy, GM did the right thing by rushing it into showrooms before guys like me are ready to buy one. Eventually, lithium-ion batteries will be cheaper. Eventually, apartment buildings will install charging stations. Eventually, gas will cost $5 a gallon. When all that happens, a lot us will buy electric cars. I want to own a Volt someday. GM hopes that brand on its forehead is big enough to make you to want one of its electric cars, too.