The explosion at Fukushima shows how far we've come in nuclear safety. It also proves how vulnerable we still are 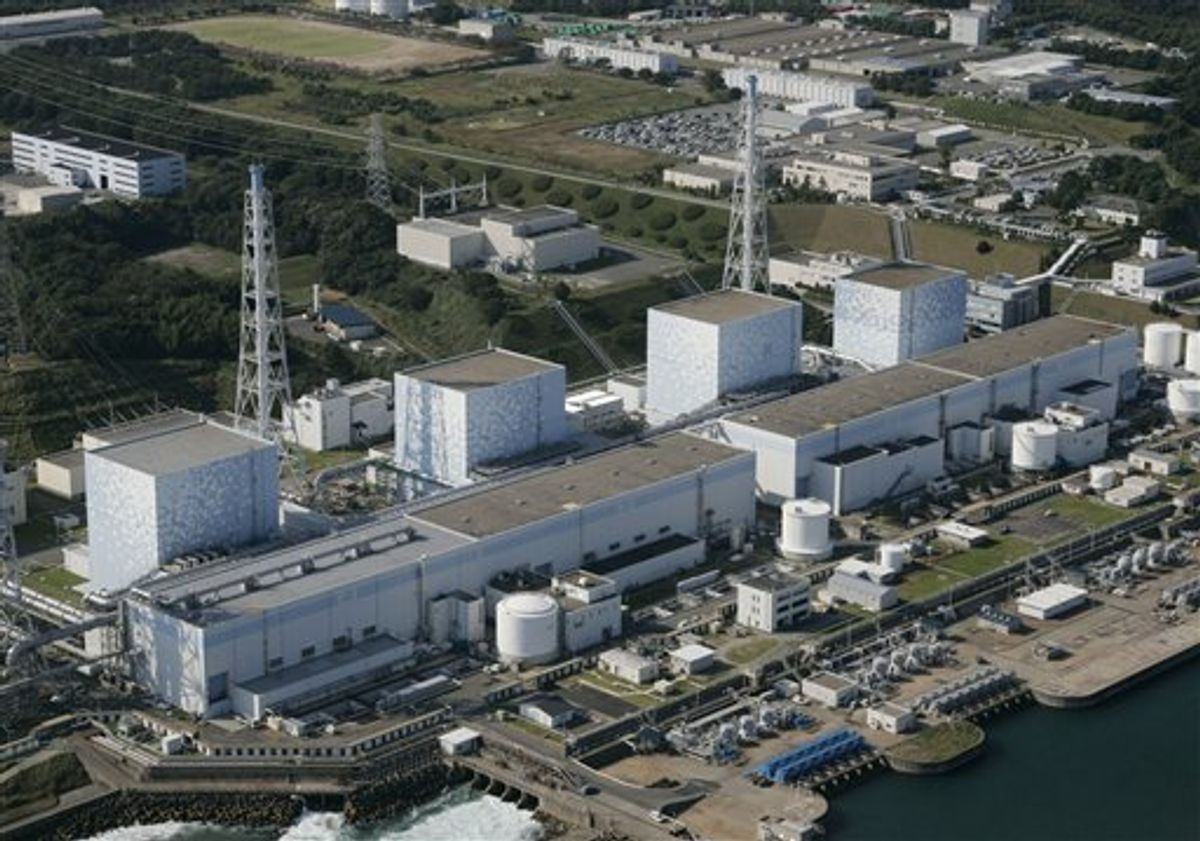 This October 2008 photo shows the Fukushima No. 1 power plant of Tokyo Electric Power Co. at Okuma, Fukushima prefecture, northern Japan. Japan's top government spokesman says the country has issued a state of emergency at the nuclear power plant after its cooling system failed. There was no radiation leak. (AP Photo/Kyodo News) JAPAN OUT, MANDATORY CREDIT, FOR COMMERCIAL USE ONLY IN NORTH AMERICA (AP)
--

While hoping for the best after watching the crippled second reactor at Japan’s Fukushima nuclear power plant explode after this week’s devastating 8.9 earthquake, it is unfortunately worth pointing out that the world was just about due for a similar accident.

This April 26th will mark 25 years since the disaster at the Chernobyl nuclear power plant in then-Soviet Ukraine changed the odds of core meltdowns happening from too miniscule to matter to once every thirty years. Since that prediction was made when there were only about 300 reactors worldwide, the growth of that number to 442 today, with 65 more reactors on the way, may explain why Fukushima is a little early.

When I went to sleep, the clock was ticking and there was little news about what Japan, with the evident help of the US air force, was doing to restore power to the cooling system. At least some melting of the reactor core seemed increasingly likely. Growing radiation levels inside were a sign that it was already happening. Perhaps the controlled release of steam could have reduced the pressure inside, preventing the kind of explosion that ripped through Chernobyl and spewed the radiation equivalent of at least 20 Hiroshimas around the globe. But then it seemed that there was no electrical power to run the venting system and the steam kept building.

Now it is clear that something went terribly, terribly wrong. Watching the shocking explosion on the news feeds makes it difficult to believe that there won't be a significant release of radiation. Before I woke up to this news, I was pretty sanguine about the levels there were reporting. After making more than 25 trips to Chernobyl where, even after 25 years for much of the radiation to decay into nothingness, contamination in places exceeds many million times normal, the one thousand times normal levels reported earlier in the day didn't seem too worrisome.

Now -- who knows (Though acccording to officials' statements, the radiation levels are now receding and a "major meltdown" is not imminent) I'm watching experts on TV consoling themselves that it may "just" have been a steam explosion. Certainly, that would be better than a nuclear explosion but that was never much of a risk at a civilian nuclear plant anyway. Chernobyl was breached by a steam explosion, too. What was different at Chernobyl, though, was the archaic graphite core. It caught fire and burned for more than ten days and the high temperatures lifted the radiation high into the atmosphere where prevailing winds carried it around the globe.

Ironically, that spared the local population from what probably would have been massive radiation exposure. Whatever happened at Fukushima, that scenario seems unlikely. If the blast affected the reactor core, whatever radiation is released will be far more localized. Hopefully, the evacuations have protected the people who lived nearby. Whether they will be able to return to their homes is a different matter.

What we are watching in Fukushima is another sad example of the many, many trade-offs required to fuel the globe’s increasingly insatiable energy appetites. While I hope that all the worst case scenarios turn out to be exaggerated, including fears that the cooling pond for the highly radioactive spent fuel rods could boil off without power to circulate its cooling water, this has to lead to a more honest and informed debate about nuclear energy.

Since the obvious effects of climate change are renewing interest in low-carbon nuclear power, I have been constantly struck by the seemingly tacit agreement on all sides that the disaster at Chernobyl is irrelevant to the issue of nuclear energy in the United States – or anywhere else in the world for that matter. Three Mile Island was mentioned, usually to say that it wasn’t all that bad. But Chernobyl never even came up in the conversation so that its assumed irrelevance could be explained away.

There are some obvious reasons. For one thing, a Chernobyl disaster would be impossible in the West, where the reactors are designed to stop nuclear fission if cooling water are lost. The Chernobyl reactor had an inherently unstable reactor design that kept fission going, even when its cooling waters were slowed down, getting hotter and building up the steam pressure until that ripped its roof off. But the explosion at Fukushima shows that just stopping nuclear fission doesn’t end the problem if the reactor is still hot and you have no way to cool it.

It is obvious now that they could not stop the build up of steam (or hydrogen), leading to what looks more and more like a Chernobyl-type explosion -- though not nearly as powerful. The energy produced by nuclear fission in the Chernobyl reactor was orders of magnitude more than the residual heat in the Fukushima reactor's core. Even so, it was enough to dramatically blow up what appears to be the containment, perhaps because the structure just went through the worst earthquake in Japan's history. A less powerful steam explosion could haved breached a weakened containment.

I have always said that Chernobyl was the worst nuclear disaster ever. It was not the worst disaster possible. Even as I hope that the doomsayers are wrong, what has already happened at Fukushima is proof enough that core melts and other serious nuclear accidents will keep happening. Hopefully, they will occur only a few times a century.

Like Three Mile Island, Chernobyl, and now Fukushima, each of those accidents will surely be different. But all must be included in honestly assessing the risks and benefits of nuclear energy.

Mary Mycio is a former LA Times reporter, and the author of "Wormwood Forest: A Natural History of Chernobyl"