Bus flipped on side, sliced in two after collision with tractor trailer early this morning 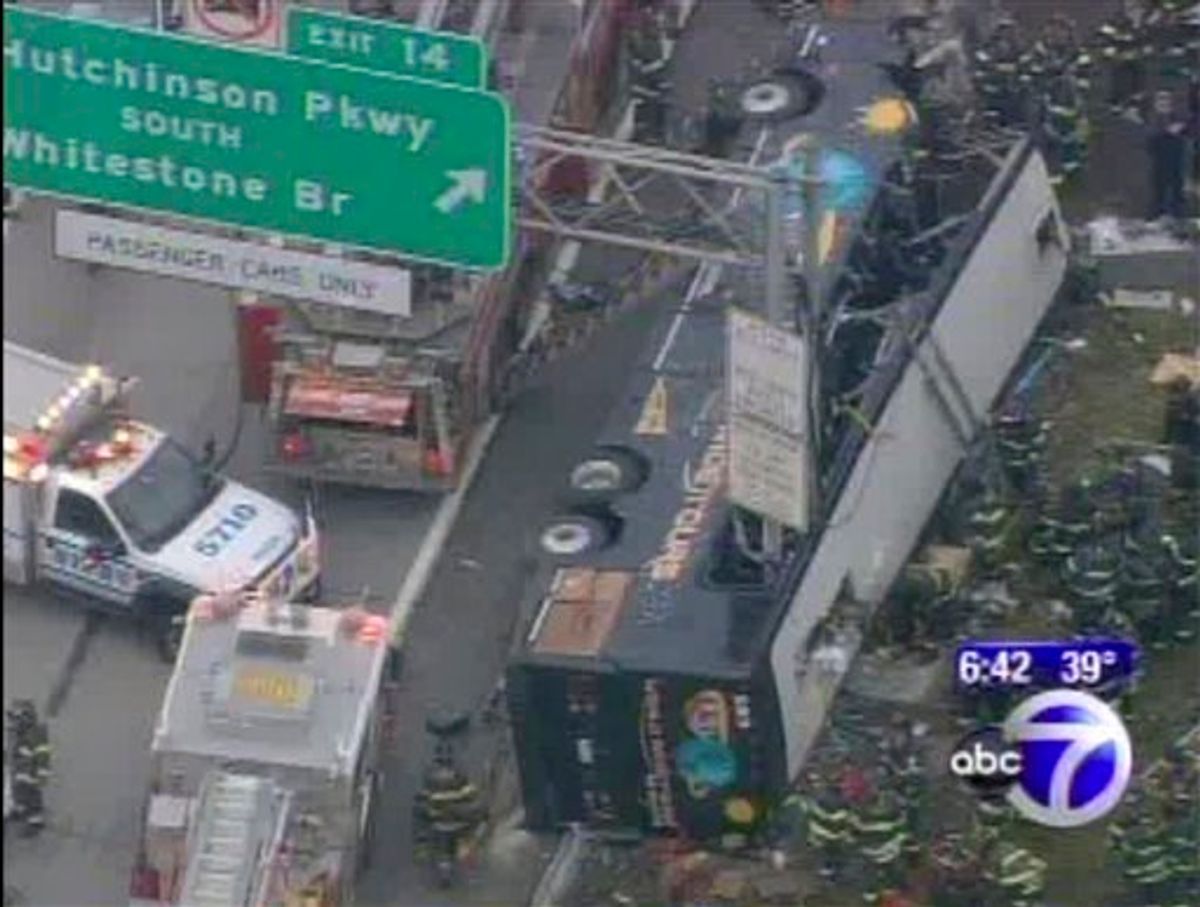 This image provided by ABC-TV shows the World Wide Tours tour bus after it was sliced by the exit sign on Interstate 95 south in the Bronx borough of New York early Saturday morning March 12, 2011. Officials say 13 people have died. Officials say 13 people have died. A New York Fire Department spokesman says the bus was carrying 31 to 33 passengers. He says in addition to the fatalities, six passengers were critically injured and four have been transported to hospitals. The spokesman says 11 others sustained minor injuries. (AP Photo/ABC) (AP)
--

Thirteen people died Saturday when a tour bus traveling down a major highway in the Bronx was clipped by a tractor trailer, flipped onto its side and was sliced in half by the support pole for a large sign, authorities said.

The wreck left a scene of carnage and closed the southbound side of Interstate-95 for hours while emergency workers attended to critically injured survivors.

Police began a hunt for the driver of the tractor trailer, which did not stop after the crash, New York Police Department spokesman Paul Browne said.

The bus, operated by the charter company World Wide Tours, was headed to Manhattan's Chinatown neighborhood carrying a full load of passengers returning from the Mohegan Sun casino in Uncasville, Conn.

As it entered the city at around 5:30 a.m., it was struck from behind by a tractor trailer, Browne said. The bus began swerving, toppled and crashed into the support post for a highway sign indicating the exit for the Hutchinson Parkway.

The pole entered through the front window, then sheared the bus from front to back along the window line, peeling the roof off all the way to the back tires.

Police and fire officials say the bus was carrying at least 31 passengers. The driver survived.

Traffic was also closed on the northbound side of the highway after the crash, but was moving again by mid-morning.