Radiation down at Japan nuclear plant after blast

Local media are reporting that as many as 1,300 people may be dead after yesterday's earthquake and tsunami 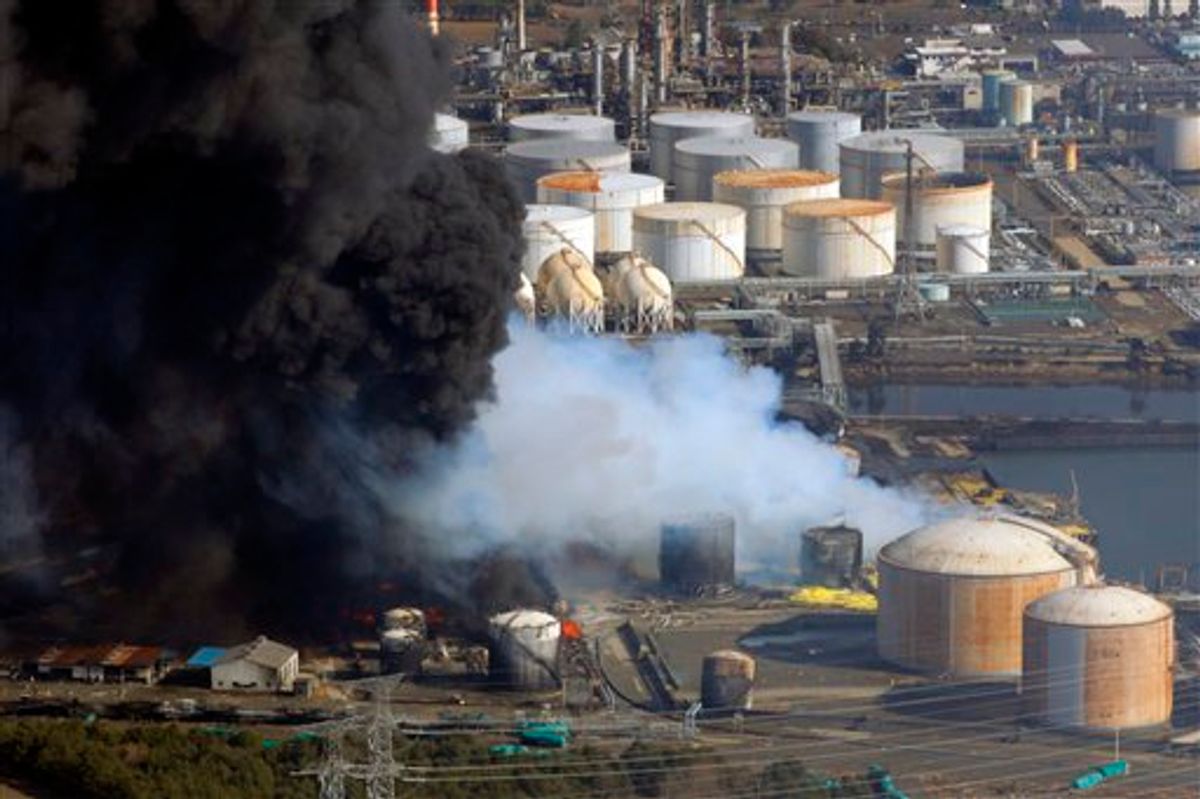 Smoke ascends over an industrial area as flames are seen in Sendai, northern Japan, Saturday, March 12, 2011. Japan launched a massive military rescue operation Saturday after a giant, quake-fed tsunami killed hundreds of people and turned the northeastern coast into a swampy wasteland, while authorities braced for a possible meltdown at a nuclear reactor. (AP Photo/Itsuo Inouye) (AP)
--

Japan's government spokesman says the metal container sheltering a nuclear reactor was not affected by an explosion that destroyed the building it's in.

Yukio Edano says the radiation around the plant did not rise after the blast but instead is decreasing. He added that pressure in the reactor was also decreasing.

Pressure and heat have been building at the nuclear reactor since an earthquake and tsunami Friday caused its cooling system to fail.

An explosion Saturday blew out the walls of the building housing the reactor. The government has ordered people within a 12-mile (20-kilometer) radius of the plant in Fukushima to evacuate the area.

Large amounts of radiation were spewing out and the evacuation area around the plant was expanded but officials did not know how dangerous the leak was to people. Shinji Kinjo, a spokesman for the Japanese nuclear agency, could not say how much radiation was in the atmosphere or how hot the reactor was following the failure of its cooling system.

Tokyo Power Electric Co., the utility that runs the Fukushima Dai-ichi plant, said four workers had suffered fractures and bruises and were being treated at a hospital. A nuclear expert said a meltdown may not pose widespread danger.

Footage on Japanese TV showed that the walls of the reactor's building had crumbled, leaving only a skeletal metal frame standing. Puffs of smoke were spewing out of the plant in Fukushima, 20 miles (30 kilometers) from Iwaki.

"We are now trying to analyze what is behind the explosion," said government spokesman Yukio Edano, stressing that people should quickly evacuate a six-mile (10-kilometer) radius. "We ask everyone to take action to secure safety."

The trouble began at the plant's Unit 1 after the massive 8.9-magnitude earthquake and the tsunami it spawned knocked out power there. According to official figures, 586 people are missing and 1,105 injured. In addition, police said between 200 and 300 bodies were found along the coast in Sendai, the biggest city in the area near the quake's epicenter.

The true scale of the destruction was still not known more than 24 hours after the quake since washed-out roads and shut airports have hindered access to the area. An untold number of bodies were believed to be buried in the rubble and debris.

In another disturbing development that could substantially raise the death toll, Kyodo news agency said rail operators lost contact with four trains running on coastal lines on Friday and still had not found them by Saturday afternoon.

East Japan Railway Co. said it did not know how many people were aboard the trains.

Adding to worries was the fate of nuclear power plants. Japan has declared states of emergency for five nuclear reactors at two power plants after the units lost cooling ability.

The most troubled one, Fukushima Dai-ichi, is facing meltdown, officials have said.

A "meltdown" is not a technical term. Rather, it is an informal way of referring to a very serious collapse of a power plant's systems and its ability to manage temperatures. It is not immediately clear if a meltdown would cause serious radiation risk, and if it did how far the risk would extend.

"It's not a fast reaction like at Chernobyl," he said. "I think that everything will be contained within the grounds, and there will be no big catastrophe."

In 1986, the Chernobyl nuclear reactor exploded and caught fire, sending a cloud of radiation over much of Europe.

Pressure has been building up in Fukushima reactor -- it's now twice the normal level -- and Japan's Nuclear and Industrial Safety Agency told reporters Saturday that the plant was venting "radioactive vapors." Officials said they were measuring radiation levels in the area. Wind in the region is weak and headed northeast, out to sea, according to the Meteorological Agency.

The reactor in trouble has already leaked some radiation: Before the explosion, operators had detected eight times the normal radiation levels outside the facility and 1,000 times normal inside Unit 1's control room.

Also before the blast, Ryohei Shiomi, a nuclear official, said that each hour the plant was releasing the amount of radiation a person normally absorbs in a year.

The evacuation area around the plant was expanded to a radius of 12 miles (20 kilometers) from the six miles (10 kilometers) before. People in the expanded area were advised to leave quickly; 51,000 residents were previously evacuated.

"Everyone wants to get out of the town. But the roads are terrible," said Reiko Takagi, a middle-aged woman, standing outside a taxi company. "It is too dangerous to go anywhere. But we are afraid that winds may change and bring radiation toward us."

Meanwhile, the first wave of military rescuers began arriving by boats and helicopters.

Prime Minister Naoto Kan said 50,000 troops would join rescue and recovery efforts following the quake that unleashed one of the greatest disasters Japan has witnessed -- a 23-foot (7-meter) tsunami that washed far inland over fields, smashing towns, airports and highways in its way.

"Most of houses along the coastline were washed away, and fire broke out there," said Kan after inspecting the quake area in a helicopter. "I realized the extremely serious damage the tsunami caused."

More than 215,000 people were living in 1,350 temporary shelters in five prefectures, or states, the national police agency said. Since the quake, more than 1 million households have not had water, mostly concentrated in northeast.

The transport ministry said all highways from Tokyo leading to quake-hit areas were closed, except for emergency vehicles. Mobile communications were spotty and calls to the devastated areas were going unanswered .

Local TV stations broadcast footage of people lining up for water and food such as rice balls. In Fukushima, city officials were handing out bottled drinks, snacks and blankets. But there were large areas that were surrounded by water and were unreachable.

One hospital in Miyagi prefecture was seen surrounded by water. The staff had painted an SOS on its rooftop and were waving white flags.

Kan said a total of 190 military aircraft and 25 ships have been sent to the area, which continued to be jolted by tremors, even 24 hours later.

More than 125 aftershocks have occurred, many of them above magnitude 6.0, which alone would be considered strong.

Technologically advanced Japan is well prepared for quakes and its buildings can withstand strong jolts, even a temblor like Friday's, which was the strongest the country has experienced since official records started in the late 1800s. What was beyond human control was the killer tsunami that followed.

It swept inland about six miles (10 kilometers) in some areas, swallowing boats, homes, cars, trees and everything else.

"The tsunami was unbelievably fast," said Koichi Takairin, a 34-year-old truck driver who was inside his sturdy four-ton rig when the wave hit the port town of Sendai.

"Smaller cars were being swept around me," he said. All I could do was sit in my truck."

His rig ruined, he joined the steady flow of survivors who walked along the road away from the sea and back into the city on Saturday. Smoke from at least one large fire could be seen in the distance.

Smashed cars and small airplanes were jumbled up against buildings near the local airport, several miles (kilometers) from the shore. Felled trees and wooden debris lay everywhere as rescue workers coasted on boats through murky waters around flooded structures, nosing their way through a sea of debris.

Basic commodities were at a premium. Hundreds lined up outside of supermarkets, and gas stations were swamped with cars. The situation was similar in scores of other towns and cities along the 1,300-mile-long (2,100-kilometer-long) eastern coastline hit by the tsunami.

In Sendai, as in many areas of the northeast, cell phone service was down, making it difficult for people to communicate with loved ones.

President Barack Obama pledged U.S. assistance following what he called a potentially "catastrophic" disaster. He said one U.S. aircraft carrier was already in Japan and a second was on its way. A U.S. ship was also heading to the Marianas Islands to assist as needed, he said.

Japan lies on the "Ring of Fire" -- an arc of earthquake and volcanic zones stretching around the Pacific where about 90 percent of the world's quakes occur, including the one that triggered the Dec. 26, 2004, Indian Ocean tsunami that killed an estimated 230,000 people in 12 countries. A magnitude-8.8 quake that shook central Chile in February 2010 also generated a tsunami and killed 524 people.