More than 170,000 evacuated from Japan's northeast coast as authorities work to mitigate risk of nuclear disaster 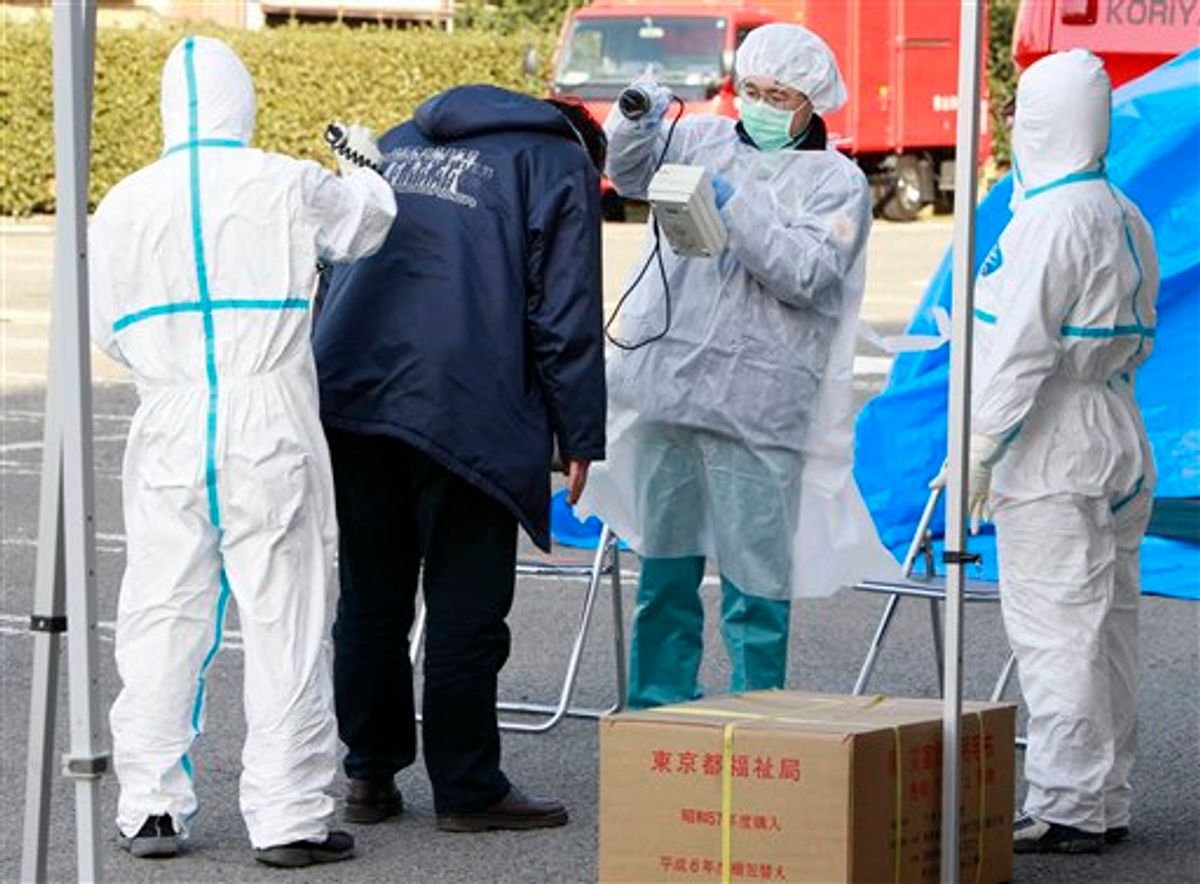 A man is scanned for levels of radiation in Koriyama, Fukushima Prefecture, Japan, Sunday, March 13, 2011. Friday's quake and tsunami damaged two nuclear reactors at a power plant in the prefecture, and at least one of them appeared to be going through a partial meltdown, raising fears of a radiation leak. (AP Photo/Mark Baker) (AP)
--

Nuclear plant operators were frantically trying to keep temperatures down in a series of nuclear reactors -- including one where officials feared a partial meltdown could be happening Sunday -- to prevent the disaster from growing worse.

Chief Cabinet Secretary Yukio Edano also said Sunday that a hydrogen explosion could occur at Unit 3 of the Fukushima Dai-ichi nuclear complex, the latest reactor to face a possible meltdown. That follows a blast the day before in the power plant's Unit 1, and operators attempted to prevent a meltdown there by injecting sea water into it.

"At the risk of raising further public concern, we cannot rule out the possibility of an explosion," Edano said. "If there is an explosion, however, there would be no significant impact on human health."

More than 170,000 people had been evacuated as a precaution, though Edano said the radioactivity released into the environment so far was so small it didn't pose any health threats.

"First I was worried about the quake," Kenji Koshiba, a construction worker who lives near the plant. "Now I'm worried about radiation." He spoke at an emergency center in Koriyama town near the power plant in Fukushima.

The French Embassy urged its citizens Sunday to leave the area around Tokyo -- 170 miles (270 kilometers) from Fukushima Dai-ichi -- in case the crisis deepened and a "radioactive plume" headed for the area around the capital. The statement acknowledged that the possibility was looking unlikely.

Edano said none of the Fukushima Dai-ichi reactors was near the point of complete meltdown, and he was confident of escaping the worst scenarios.

A complete meltdown -- the collapse of a power plant's ability to keep temperatures under control -- could release uranium and dangerous contaminants into the environment and pose major, widespread health risks.

Up to 160 people, including 60 elderly patients and medical staff who had been waiting for evacuation in the nearby town of Futabe, and 100 others evacuating by bus, might have been exposed to radiation, said Ryo Miyake, a spokesman from Japan's nuclear agency. The severity of their exposure, or if it had reached dangerous levels, was not clear. They were being taken to hospitals.

Edano said operators were trying to cool and decrease the pressure in the Unit 3 reactor, just as they had the day before at Unit 1.

"We're taking measures on Unit 3 based on a similar possibility" of a partial meltdown, Edano said.

Japan struggled with the nuclear crisis as it tried to determine the scale of the Friday disasters, when an 8.9-magnitude earthquake, the most powerful in the country's recorded history, was followed by a tsunami that savaged its northeastern coast with breathtaking speed and power.

More than 1,400 people were killed and hundreds more were missing, according to officials, but police in one of the worst-hit areas estimated the toll there alone could eventually top 10,000.

The scale of the multiple disasters appeared to be outpacing the efforts of Japanese authorities to bring the situation under control more than two days after the initial quake.

Rescue teams were struggling to search hundreds of miles (kilometers) of devastated coastline, and hundreds of thousands of hungry survivors huddled in darkened emergency centers cut off from rescuers and aid. At least 1.4 million households had gone without water since the quake, and food and gasoline were quickly running out across the region. Large areas of the countryside were surrounded by water and unreachable. Some 2 million households were without electricity.

Japanese Trade Minister Banri Kaieda warned that the region was likely to face further blackouts, and power would be rationed to ensure supplies to essential facilities.

The government doubled the number of troops pressed into rescue and recovery operations to about 100,000 from 51,000, as powerful aftershocks continued to rock the country. Hundreds have hit since the initial temblor.

Unit 3 at the Fukushima plant is one of three reactors there that had automatically shut down and lost cooling functions necessary to keep fuel rods working properly due to a power outage from the quake. The facility's Unit 1 is also in trouble, but Unit 2 has been less affected.

On Saturday, an explosion destroyed the walls of Unit 1 as operators desperately tried to prevent it from overheating and melting down.

Without power, and with its valves and pumps damaged by the tsunami, authorities resorted to drawing sea water mixed with boron in an attempt to cool the unit's overheated uranium fuel rods. Boron disrupts nuclear chain reactions.

Robert Alvarez, senior scholar at the Institute for Policy Studies and former senior policy adviser to the U.S. secretary of energy, told reporters that the sea water was a desperate measure.

He said that the success of using sea water and boron to cool the reactor will depend on the volume and rate of their distribution. He said the dousing would need to continue nonstop for days.

Another key, he said, was the restoration of electrical power, so that normal cooling systems can operate.

Edano said the cooling operation at Unit 1 was going smoothly after the sea water was pumped in.

Operators released slightly radioactive air from Unit 3 on Sunday, while injecting water into it hoping to reduce pressure and temperature to prevent a possible meltdown, Edano said.

He said radiation levels just outside the plant briefly rose above legal limits, but since had declined significantly. Also, fuel rods were exposed briefly, he said, indicating that coolant water didn't cover the rods for some time. That would have contributed further to raising the temperature in the reactor vessel.

At an evacuation center in Koriyama, about 40 miles (60 kilometers) from the troubled reactors and 125 miles (190 kilometers) north of Tokyo, medical experts had checked about 1,500 people for radiation exposure in an emergency testing center, an official said.

On Sunday, a few dozen people waited to be checked in a collection of blue tents set up in a parking lot outside a local gymnasium. Fire engines surrounded the scene, with their lights flashing.

Many of the gym's windows were shattered by the quake, and glass shards littered the ground.

A steady flow of people -- the elderly, schoolchildren and families with babies -- arrived at the center, where they were checked by officials wearing helmets, surgical masks and goggles.

Officials placed five reactors, including Units 1 and 3 at Dai-ichi, under states of emergency Friday after operators lost the ability to cool the reactors using usual procedures.

An additional reactor was added to the list early Sunday, for a total of six -- three at the Dai-ichi complex and three at another nearby complex. Local evacuations have been ordered at each location. Japan has a total of 55 reactors spread across 17 complexes nationwide.

Officials were aware that the steam contained hydrogen and were risking an explosion by venting it, acknowledged Shinji Kinjo, spokesman for the government's Nuclear and Industrial Safety Agency, but chose to do so because they needed to keep circulating cool water on the fuel rods to prevent a meltdown.

Officials insisted there was no significant radioactive leak after the explosion.

If a full-scale meltdown were to occur, experts interviewed by The Associated Press said melted fuel would eat through the bottom of the reactor vessel, then through the floor of the containment building. At that point, the uranium and dangerous byproducts would start escaping into the environment.

Eventually, the walls of the reactor vessel -- six inches (15 centimeters) of stainless steel -- would melt into a lava-like pile, slump into any remaining water on the floor, and potentially cause an explosion that would enhance the spread of radioactive contaminants.

If the reactor core became exposed to the outside, officials would likely began pouring cement and sand over the entire facility, as was done at the 1986 Chernobyl nuclear accident in the Ukraine, Peter Bradford, a former commissioner of the U.S. Nuclear Regulatory Commission, told reporters.

Another expert, physicist Ken Bergeron, told reporters that as a result of such a meltdown the surrounding land would be off-limits for a long time and "a lot of first responders would die."

Yamaguchi reported from Tokyo. Associated Press writers Tomoko A. Hosaka in Tokyo, Jeff Donn in Boston and Jamey Keaten in Paris contributed to this report.