Gadhafi drives rebels from one of last strongholds 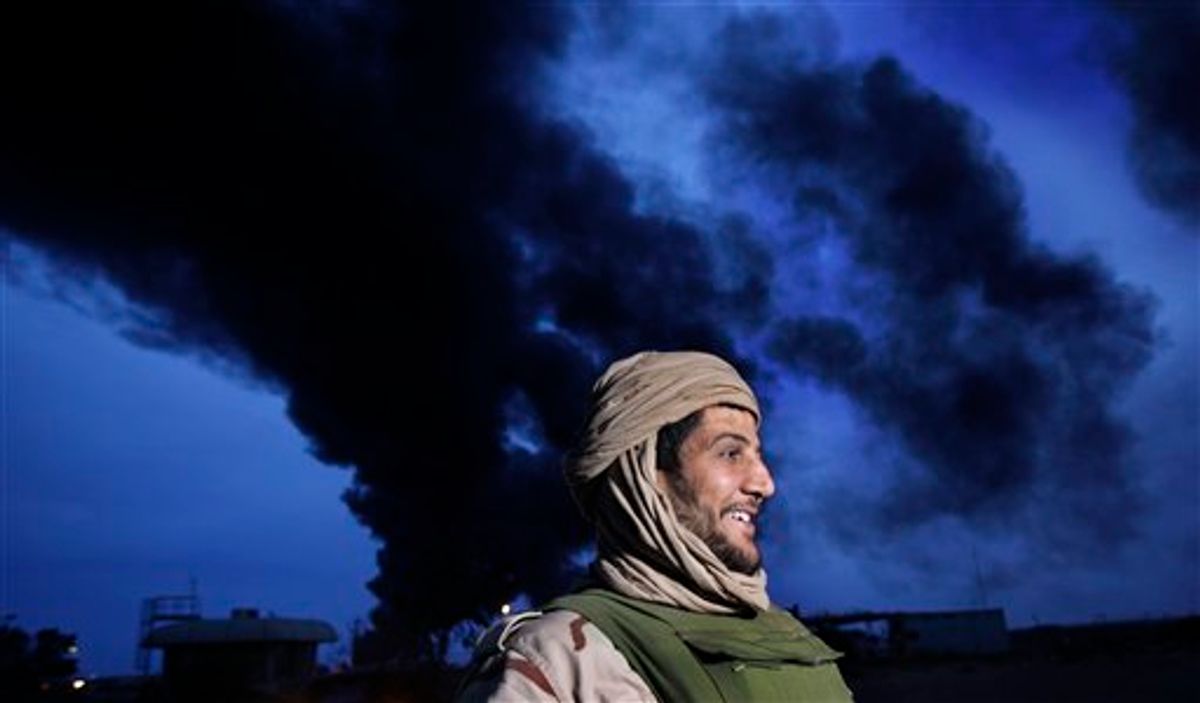 In this photo taken during a government-organised visit for foreign media, a pro-Gadhafi fighter is seen beneath a plume of smoke from the burning oil refinery in Ras Lanouf, 380 miles (615 kilometers) southeast of the capital Tripoli, in Libya Saturday, March 12, 2011. (AP Photo/Ben Curtis) (AP)
--

Moammar Gadhafi's forces drove rebels from one of their final strongholds on Libya's main coastal highway on Sunday, pushing at least 25 miles deeper into opposition territory after hours of terrifying assault from the air, land and sea.

Rebels said they were fleeing the oil town of Brega under heavy attack, losing a vital source of fuel for their vehicles and leaving Gadhafi's military less than 150 miles from the main opposition city of Benghazi.

A spokesman for Gadhafi's military declared that it had seized control of Brega.

The strongman's relentless advance left the city of Ajdabiya as the sole major population center between his forces and the rebel headquarters. If his string of successes continue, the Libyan strongman will soon face the choice of consolidating his control of the Mediterranean coast or moving swiftly toward Benghazi and the prospect of a devastating battle.

"Benghazi doesn't deserve a full-scale military action," army spokesman Milad Hussein told reporters in the capital, Tripoli. "They are a group of rats and vermin and as soon as we go in, they will raise their hands and surrender."

Gadhafi's navy, army and air force began pounding Brega with artillery, rockets and bombs Sunday morning and didn't let up all day, forcing doctors and wounded people from the town's hospital with a missile strike, several rebels told The Associated Press after fleeing.

"There wasn't any time to breathe, to do anything," one fighter with responsibility for logistics said by telephone as he fled Brega for Ajdabiya, about 50 miles (80 kilometers) by road to the east. Explosions went off in the background.

Speaking on condition of anonymity for fear of retaliation, he said the opposition was bracing for conflict in Ajdabiya by evacuating doctors and the wounded from there, too.

He said some rebels had gathered in a seaside village a few miles east of Brega, hoping to halt Gadhafi's forces. He said more fighters from rebel strongholds in the east were heading to Ajdabiya to prepare for a battle there.

The rebels were trying to secure the southern and eastern roads to Ajdabiya and storing provisions and weapons there after the loss of free access to gasoline in Brega.

"I think they are bombing heavily because they want to win time before a no-fly zone is imposed," he shouted over the phone.

The Arab League asked the U.N. Security Council Saturday to impose a no-fly zone but the U.S. and many allies have expressed deep reservations about a tactic that would require them to destroy Gadhafi's air defenses and possibly shoot down his planes.

U.S. Secretary of State Hillary Rodham Clinton was set to leave Sunday for a trip to Europe and the Middle East to establish the Obama administration's highest-level contacts with the Libyan opposition.

She planned to see foes of Gadhafi in Paris to assess their capabilities and intentions, but the U.N. and NATO appeared no closer Sunday to imposing a no-fly zone.

An opposition leader in Ajdabiya said the rebels planned to retake Brega and were attacking Gadhafi's forces with guns and roadside bombs as they moved in reinforcements from government-held cities in the west.

The rebels are fighting to oust Gadhafi from power after more than 41 years, inspired by protesters who toppled authoritarian rulers in neighboring Tunisia and Egypt. A week ago they held the entire eastern half of the country and were charging toward the capital, Tripoli. Then Gadhafi's troops began reversing those early gains with superior weaponrym and firepower from the air.

With much of the fighting in the east taking place along a coastal highway bounded by strips of desert, there are few places for the rebels to take cover, forcing them to withdraw under fire before attempting to surge back.

One resident, who did not want his name used because he fears for his safety, said streets inside the city were empty as people took cover in their homes and the noise of tanks, anti-aircraft fire and machine guns grew ever-nearer.

He said several tank shells had struck inside the city, hitting a mosque and an apartment building.