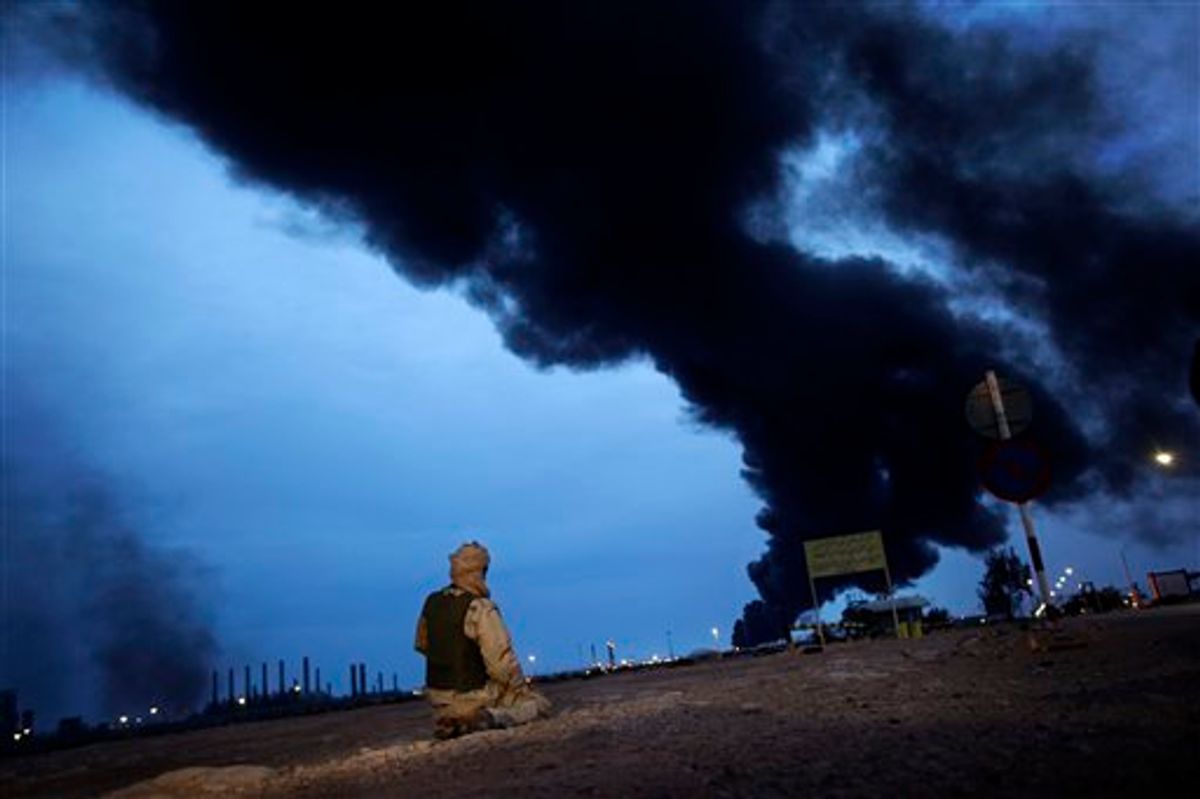 In this photo taken during a government-organised visit for foreign media, a pro-Gadhafi fighter makes his evening prayers in the desert as a plume of smoke rises from the burning oil refinery in Ras Lanouf, 380 miles (615 kilometers) southeast of the capital Tripoli, in Libya Saturday, March 12, 2011. (AP Photo/Ben Curtis) (AP)
--

Troops loyal to Moammar Gadhafi shelled an oil town in eastern Libya on Sunday, pounding pockets of resistance during their swift advance on the country's poorly equipped and loosely organized rebels.

Rebel officials in their stronghold of Benghazi told The Associated Press that Brega, the site of a major oil terminal, came under heavy shelling Sunday. Libyan state television reported that government troops had retaken the town, but the report could not immediately be verified.

Libyan TV has issued faulty reports claiming territory in the past.

The loss of Brega would be the latest in a series of setbacks for opposition forces who just a week ago held the entire eastern half of the country and were charging toward the capital, Tripoli. But Gadhafi's troops have reversed many of those early gains, bearing down on the rebels with superior firepower from the air.

The rebels are fighting to oust Gadhafi from power after more than 41 years, inspired by protesters who managed to topple authoritarian rulers in neighboring Tunisia and Egypt. However, the Libyan uprising has already proved much more violent, and could be the start of a drawn out and bloody civil war.

With Gadhafi becoming more internationally isolated, U.S. Secretary of State Hillary Rodham Clinton was set to leave Sunday for a trip to Europe and the Middle East to establish the Obama administration's highest-level contacts with the Libyan opposition.

She plans to see foes of Gadhafi in Paris on Monday to assess their capabilities and intentions.

The Arab League has also shunned the Libyan leader and asked the U.N. Security Council Saturday to impose a no-fly zone. In surprisingly aggressive language, the 22-member bloc said the Libyan government had "lost its sovereignty" and asked the United Nations to "shoulder its responsibility" and impose the restriction.

The rebels have called for a no-fly zone as well, saying they are no match for the Gadhafi regime's fighter jets.

The U.S. and many allies have expressed deep reservations about the effectiveness of a no-fly zone, and the possibility it could drag them into another messy conflict in the Muslim world. Western diplomats have said Arab and African approval was necessary before the Security Council voted on imposing a no-fly zone, which would be imposed by NATO nations to protect civilians from air attack by Gadhafi's forces.

A rebel fighter who said he was in Brega a day earlier reported that government forces conducted strikes on the town with aircraft, tanks and naval ships off the coast, forcing the rebels to flee. He asserted that the rebels would regroup quickly and take it back, claiming the government had powerful weapons but lacked the manpower to hold onto towns. He did not want to be identified by name.

One resident, who did not want his name used because he fears for his safety, said streets inside the city were empty as people took cover in their homes and the noise of tanks, anti-aircraft fire and machine guns grew ever-nearer.

A day earlier, the Libyan government took reporters from Tripoli, 375 miles (600 kilometers) east by plane and bus to show off its control of the former front-line town of Bin Jawwad, the scene of brutal battles six days earlier between insurgents and Gadhafi loyalists using artillery, rockets and helicopter gunships.

A police station was destroyed, its windows shattered and its walls blackened and burned. The inside was strewn with broken furniture. A nearby school had holes in the roof and a wall. Homes nearby were empty and cars were overturned or left as charred hulks in the road.

Rubble filled the streets and a sulfurous smell hung in the air.

The tour continued 40 miles (65 kilometers) to the east in Ras Lanouf, an oil port of boxy, sand-colored buildings with satellite dishes on top.

The area was silent and devoid of any sign of life, with laundry still fluttering on lines strung across balconies. About 50 soldiers or militia members in 10 white Toyota pickups, holding up portraits of Gadhafi, guarded the area. A playground was strewn with bullet casings and medical supplies looted from a nearby pharmacy whose doors had been shot open.

On Saturday, Al-Jazeera cameraman Ali Hassan al-Jaber was killed in what the pan-Arab satellite station described as an ambush outside Benghazi.

Correspondent Baybah Wald Amhadi said the crew's car came under fire from the rear as it returned from an assignment south of Benghazi. Al-Jaber was shot three times in the back and a fourth bullet hit another correspondent near the ear and wounded him, Amhadi said.

"Even areas under rebel control are not totally safe," he said. "There are followers, eyes or fifth columns, for Col. Gadhafi."