Does the little guy only win in the movies?

As a teacher, I want my students to believe they can do whatever they want. Sometimes I wonder if that's true 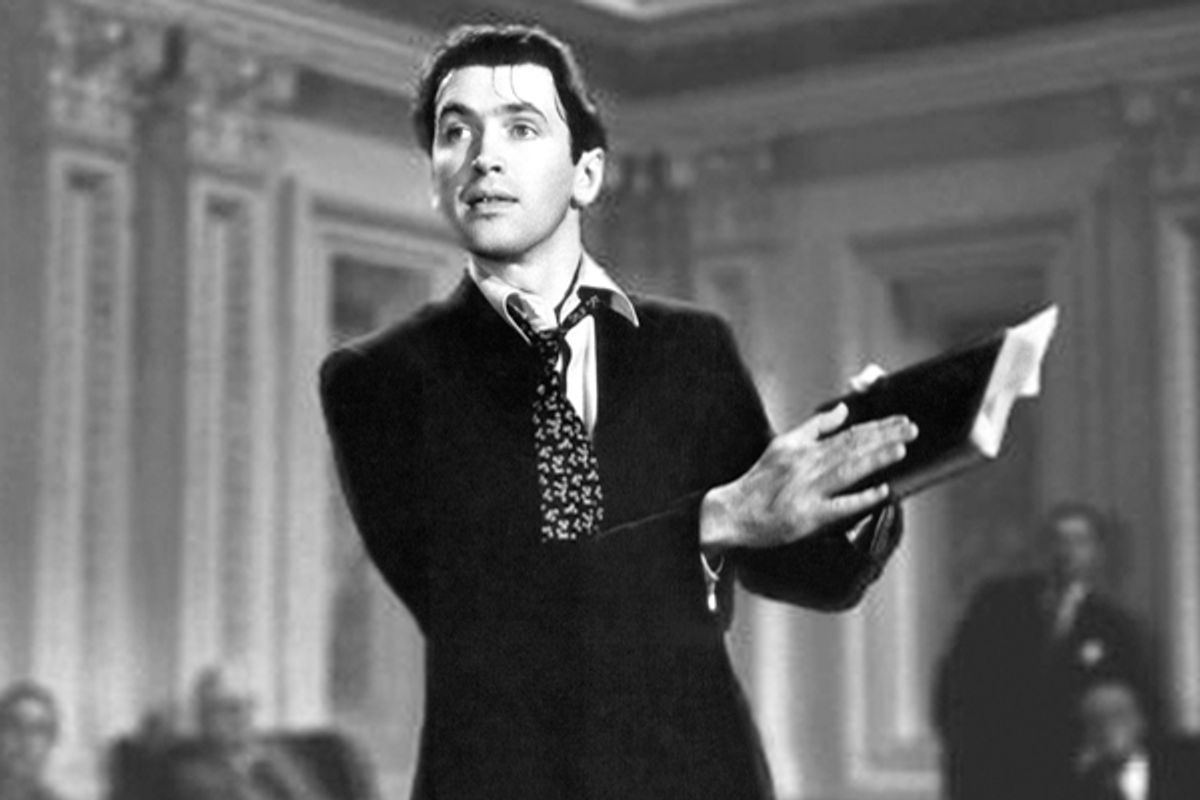 This quarter, my fifth period senior English class is doing their film studies elective. It's week two, and our selection this week is Frank Capra's classic, "Mr. Smith Goes To Washington." My seniors complained at first, of course -- because it's March, and they're seniors, and the fact that the sun rises in the east and they have to expand and contract their lungs to breathe air is enough to justify complaining, so watching a movie from back in the days before the earth was colorized is a torture equivalent to waterboarding. But as we watch it together, the complaining drops off by about 20 minutes in. They start getting the jokes, and by the time the corrupt Taylor machine is working its evil magic to run the gawky and naïve Jeff Smith out of the Senate, they're furious on his behalf. At the end, I'm not the only one reaching for Kleenex.

My kids are inner-city teens at a charter high school. Their lives, at first glance, don't seem remotely connected to the idealistic black-and-white world of Frank Capra. But there's something about the film that we can all identify with -- the belief that willpower and honesty and decency can win over corruption and graft and greed, that the little guy can go from being a pawn sacrificed to the system that's supposed to protect him, to a hero changing that system for the better.

This time around, I'm tearing up right at the start of the movie -- right from the schmaltzy, melodramatic Ode to American Democracy that is Smith's first visit to the Lincoln Memorial, complete with a ragtime medley of patriotic songs. Critics can rightfully mock it as overly sentimental. But this week, as I read articles and Facebook posts about the protests in Wisconsin and Ohio, as we sat in our department head meeting yesterday going over new Race To The Top and NCLB requirements, I guess my normal hardened cynicism is especially vulnerable to patriotic sentiment.

My fellow teachers and I all went into teaching thinking we were Jefferson Smith. We all came to a new inner-city charter school (third question into my interview: "So, what will you do when there's a fight?") thinking that we were going to help disadvantaged kids make it through the system, that we could fight for the "lost causes" -- because, as Mr. Smith knows, those are the only causes worth fighting for. And we have, for the most part. Some of them still get lost. I still make raw jokes about Devin, who's still on my roster after six years of teaching here -- a smart, funny kid, one of my mentees, who over the years went from infrequent attendance to none at all. I make Absent Devin jokes because it's too painful not to, to think of where he is now as a young black male with no high school diploma. Kids like Devin drive us in droves to happy hour on Friday after school.

But we've kept our optimism, because sometimes we've championed our lost causes to success, despite the odds. They come back and visit after graduating, because they say our school feels like family. They come wandering into my classroom while I'm teaching, tell my students, "I got an A on my first college paper because of this lady here." That's when we can still feel like America is a great place, where anyone can rise to the top, where a poor kid can go to a good college, where a person from any background can become President.

So why are we so disillusioned now? Well, we're starting to feel that there are more Taylors in the government than there are Jeff Smiths. Even as an English teacher, I know enough math to see that the majority of the money in this country is in the hands of a few people, and money controls policy enough that their tax cuts are extended while public services and education funding dwindle.

Meanwhile, the pressure on teachers rises; we're told it's our responsibility to make every child pass and succeed through sophomore year of college, and everything from salary to our jobs themselves depends on that success. We can see the big picture here, because under this system, talented new teachers aren't going to go teach at schools like ours, where kids come to school hungry or having dodged drug dealers and bullets on the way in. Can I guarantee a college diploma for all of my seniors? Am I willing to bet my livelihood on it? The kids of the wealthy go to affluent suburban schools, where they have high test scores; wouldn't you want to teach there instead, with $60K in student loans looming ominously in your future?

The real sting, though, is that suddenly, teachers are characterized by politicians and pundits alike as greedy money-grubbers with powerful unions and bloated benefits, who work a few hours a day with summers off, and can't even get a kid to pass an exam. There have always been people who say this, and normally we can laugh it off -- you need to have a good sense of humor, after all, to be a teacher. But now, it's not just anyone saying these things -- it's our leaders, the ones we voted for and listen to. And people, from school boards to parents, are listening to them as well.

I try to teach democratic ideals to my students. Many of them are inherently angry; they know they've been failed by the system for a long time. I try to use our discussions on literature and history to give them some optimism, to make them feel as though they can make a change. Every fall, I harangue my seniors to register to vote, to resist apathy. I tell them that hard work and honesty and commitment will make you successful. I have a cynical shell, but I'm an optimist at heart. But to hear the rhetoric against teachers, to be accused of greed and corruption by the democratic system that I believe in, is the most disheartening thing I've faced -- Mr. Smith sobbing at the Lincoln Memorial, suitcases in hand, naïve no more.

I love teaching. I love democracy. My little charter school got rid of the biggest teachers' union in the state, which represented us, because we didn't like how they'd bash charter schools in public while they were supposed to be representing us. Instead, we formed our own collective bargaining association in order to protect our basic rights -- things like having a salary and not getting fired on a whim. Sticking with our ideals, and with what we believed was in the best interest of our students, left us struggling. Our health care, frankly, sucks, and we pay for it. Our hours -- not exactly ideal. Some of us teach 8 out of 9 periods a day; we don't get overtime for 13-hour days during parent-teacher conferences, or for driving kids out to rural areas for late basketball games, getting home around midnight. We haven't gotten a raise in years.

Yet teacher retention at our school has been great -- young teachers with energy and enthusiasm, who work second jobs waitressing or landscaping in the summer to make up for crappy salaries and benefits. We exercised our rights to collective bargaining, and by doing so, we made sacrifices so that our shoestring budget could go to things like keeping enough teachers, adding music and art, and increasing technology for our students (many of whom don't have computers at home). We do this because we're all still optimists at heart, because we love the kids and the potential they represent for the future.

So it hurts in a deep, visceral level to be called greedy. It hurts to hear ourselves referred to as the enemy of the public, as though we aren't part of that public, as though our tax money hasn't gone to corporate bailouts while we use the remainder of our paychecks to fund our own classroom supplies. It hurts to read and hear about educational budgets being cut even as teachers are held increasingly accountable for test scores. We're told we have to make sacrifices, that it's our duty to play ball, and the rhetoric echoes the words of Mr. Smith's fallen idol, Senator Payne: "This is a man's world, Jeff, and you've got to check your ideals outside the door, like you do your rubbers. Thirty years ago I had your ideals. I was you. I had to make the same decision you were asked to make today. And I made it. I compromised -- yes! So that all those years, I could sit in that Senate and serve the people in a thousand honest ways. You've got to face facts, Jeff... Don't you understand?"

And we do. We do understand. We take the pay cuts and swallow the rhetoric because we know we're in a mess, and it's partly our making. There's apathy among voters; that's how people like Scott Walker got elected, right? We weren't political enough; we left politics to those in power, from Republicans and CEOs to Democrats and union leaders, and we didn't notice or care that they shed their ideals somewhere along the way. Because I like to think that at some point, they had them. Even those in power, as Smith points out, were kids once. Those in power tell us that our duty is to raise test scores -- reading, writing, math, science, history. But maybe we need to spend more time watching Capra with our kids, making sure that students understand that freedom isn't buried in books, and what we need most is honesty and the willingness to stand up against injustice.

I like to think that all of my seniors, reluctantly moved as Jeff Smith collapses in the Senate, will go out into the world in June believing his message -- love thy neighbor. Fight for the lost causes. Look out for the little guy. Don't take freedom for granted. And if I can get them to hold on to those beliefs, at least they can help clean up the mess we've made. As teachers, we know that's the most important lesson, and that knowledge is a great trust.