After weekend of huge protests, Wisconsin looks to polls

Nearly 100,000 protesters descended on Madison today to rally against passage of anti-union bill 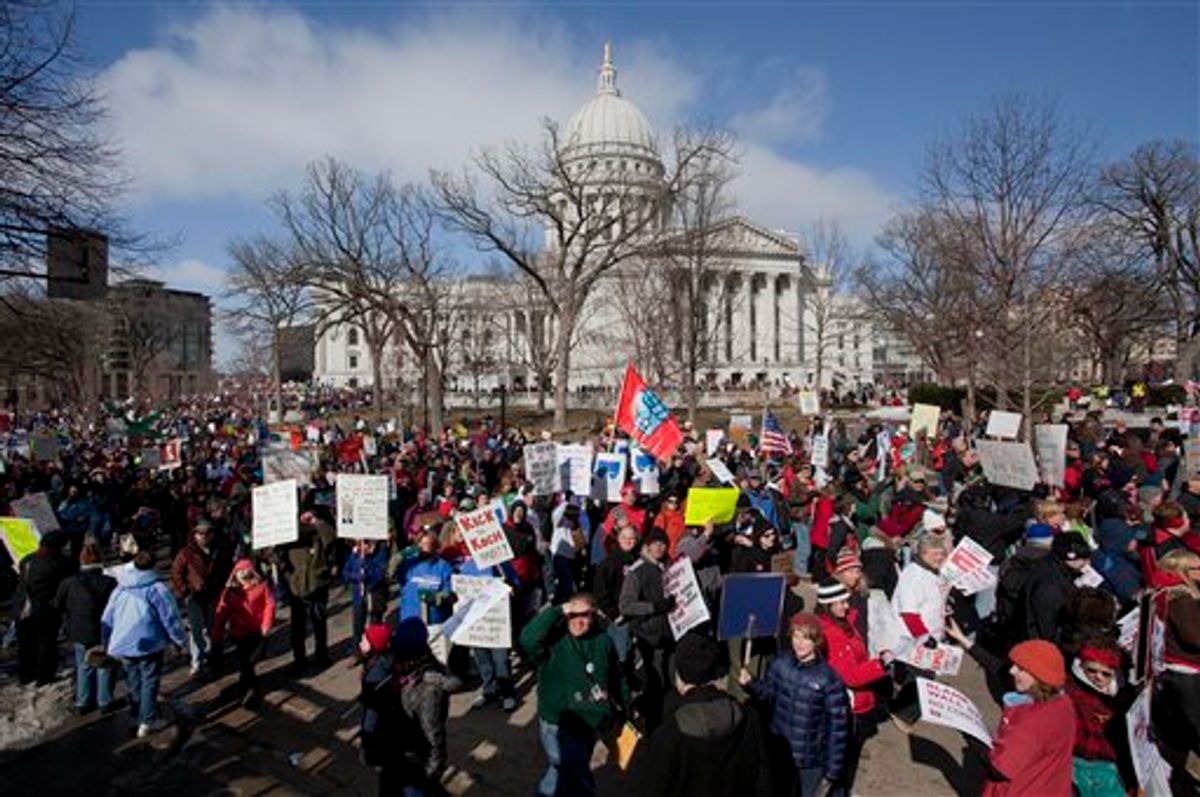 Thousands of pro-labor protesters rallied at the Wisconsin Capitol Saturday, March 12, 2011, in Madison, Wis., vowing to fight back after the state's Republican governor signed into law a controversial bill that eliminates most union rights for public employees.(AP Photo/Morry Gash) (AP)
--

Protests have rocked the Capitol almost every day since Gov. Scott Walker proposed taking nearly all collective bargaining rights away from public workers, but the largest came a day after the governor signed the measure into law. Madison Police estimated the crowd at 85,000 to 100,000 people -- along with 50 tractors and one donkey -- by late afternoon. No one was arrested.

Speakers delivered angry diatribes while the crowd carried signs comparing Walker to dictators and yelled thunderous chants of "this is what democracy looks like."

"This is so not the end," said protester Judy Gump, a 45-year-old English teacher at Madison Memorial High School. "This is what makes people more determined and makes them dig in."

Walker's signature on the measure capped a week of political maneuvering to end a bitter, month-long standoff that began when the state's 14 Democratic senators fled to Illinois in an ultimately futile attempt to block the legislation.

Throngs of protesters gathered Saturday outside a convention center where senators made their first public appearances in Madison since ending their self-imposed exile. Demonstrators treated the lawmakers like rock stars, yelling "Fab 14, our heroes!" and giddily snapping pictures.

All 14 Democrats later marched around the Capitol, trading chants of "thank you" with protesters who ringed the sidewalks. When the senators made their way to a stage, they promised to shift their energies toward recall drives already under way against eight of their GOP colleagues.

"Now ... we trade in our rally signs for clipboards and we take to the streets to recall the Republicans," Sen. Chris Larson of Milwaukee told the cheering crowd, "and in one year we recall the governor that refuses to listen."

Walker is not eligible to be recalled until he completes his first year in office in January 2012.

Eight of the Democrats also face recall efforts. Senate Majority Leader Scott Fitzgerald issued a statement Saturday calling them the most shameful 14 people in the state.

"(Fleeing to Illinois) is an absolute insult to the hundreds of thousands of Wisconsinites who are struggling to find a job, much less one they can run away from and go down to Illinois -- with pay," Fitzgerald said.

Walker's plan has spurred a national debate over labor rights. Its passage is a key victory for Republicans who have targeted unions in efforts to cut government spending across the country. Democrats see it as a blatant attempt to weaken organized labor, one of their strongest campaign allies.

Labor leaders have promised to use the setback to fire up members and mount a major counterattack against Republicans at the ballot box in 2012.

"We're never going to give up," said Marilyn Rolfsmeyer, 56, who serves as the 300-student Argyle School District's only art teacher. "What part of it don't they understand? There's hope here. I feel it. You feel the energy, the intensity. Somebody's got to be out there feeling it, too."

Dozens of fist-pumping farmers drew cheers as they chugged around the Capitol square in tractors bearing signs with messages such as "planting the seeds for a big season of recalls."

"Farmers are working-class Americans," he said as the crowd cheered. "We work for a living as hard as anybody, and this is about all of us."

The new law erases public workers' ability to collectively bargain anything except wages up to the rate of inflation. It also requires them to contribute more to their pensions and health care, changes that amount to an 8 percent pay cut. Police and firefighters are exempt.

The Senate Democrats had fled to deny Republicans, who hold a 19-14 Senate majority, the 20-member quorum needed to vote on measures that spend money. But GOP leaders worked around them Wednesday, calling a special committee to take spending items out of Walker's proposal.

The Senate passed it 18-1 minutes later. Assembly Republicans approved it the next day.

Democratic Dane County Executive Kathleen Falk has filed a lawsuit seeking to block the secretary of state from publishing the law, the last step before it takes effect. She argues the bill still contained fiscal items and that the committee meeting violated Wisconsin's open meeting law.