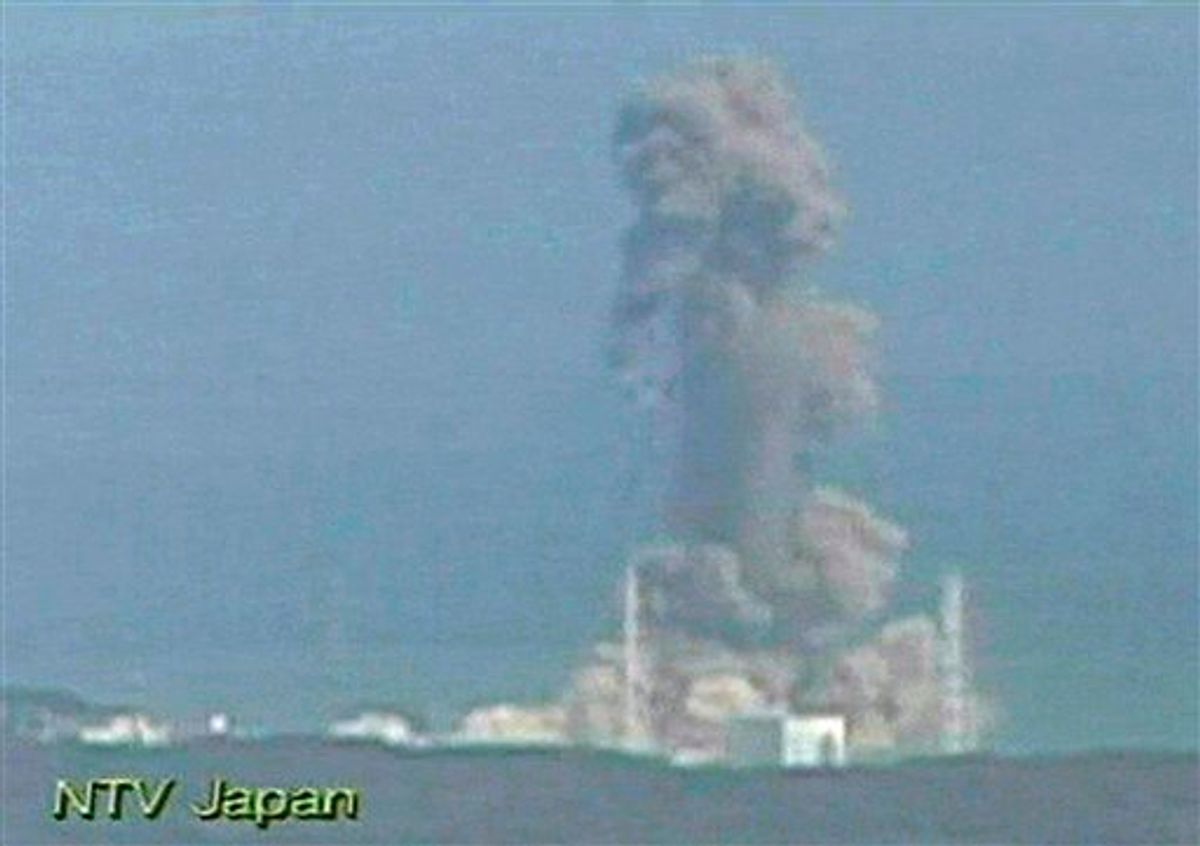 The second hydrogen explosion in three days rocked a stricken Japanese nuclear plant Monday, sending a massive cloud of smoke into the air and injuring 11 workers. Hours later, the U.S. said it had shifted its offshore forces away from the plant after detecting low levels of radiation.

The aircraft carrier USS Ronald Reagan was about 100 miles (160 kilometers) offshore when it detected the radiation, which U.S. officials said was about the same as one month's normal exposure to natural background radiation in the environment.

It was not clear if the leak happened during Monday's explosion. That blast was felt 25 miles (40 kilometers) away, but the plant's operator said radiation levels at the reactor were still within legal limits.

The explosion at the plant's Unit 3, which authorities have been trying to cool with sea water after a system failure in the wake of Friday's massive earthquake and tsunami, triggered an order for hundreds of people to stay indoors, said Chief Cabinet Secretary Yukio Edano. The two disasters left at least 10,000 people dead.

Operators knew the sea water flooding would cause a pressure buildup in the reactor containment vessel -- and potentially lead to an explosion -- but felt they had no choice if they wanted to avoid a complete meltdown. In the end, the hydrogen in the released steam mixed with oxygen in the atmosphere and set off the blast.

The inner containment shell surrounding the Unit 3 reactor was intact, Edano said, allaying some fears of the risk to the environment and public. But the outer building around the reactor appeared to have been devastated, with only a skeletal frame remaining.

Tokyo Electric Power Co., which operates the plant, said radiation levels at Unit 3 were well under the levels where a nuclear operator must file a report to the government.

A similar explosion occurred Saturday at the plant's Unit 1, injuring four workers, causing mass evacuations and destroying much of the outer building.

Shortly after Monday's explosion, Tokyo Electric warned it had lost the ability to cool another reactor, the plant's Unit 2. Takako Kitajima, a company official, said plant workers were preparing to inject sea water into the unit to cool the reactor, a move that could lead to an explosion there as well.

More than 180,000 people have evacuated the area in recent days, and up to 160 may have been exposed to radiation -- pouring misery onto those already devastated by the twin disasters.

While Japan has aggressively prepared for years for major earthquakes, reinforcing buildings and running drills, the impact of the tsunami -- which came so quickly that not many people managed to flee to higher ground -- was immense.

By Monday, officials were clearly overwhelmed by the scale of the crisis, with millions of people having spent three nights without electricity, water, food or heat in near-freezing temperatures.

Officials in one devastated town said they were running out of body bags.

Officials have declared states of emergency at six Fukushima reactors, where Friday's twin disasters knocked out the main cooling systems and backup generators. Three are at Dai-ichi and three at the nearby Fukushima Daini complex.

Most attention, though, has been focused on Dai-ichi units 1 and 3, where operators have been funneling in sea water in a last-ditch measure to cool the reactors. A complete meltdown -- the melting of the radioactive core -- could release radioactive contaminants into the environment and pose major, widespread health risks.

Edano said no Fukushima reactor was near that point, and he was confident of escaping the worst scenarios.

International scientists say there are serious dangers but little risk of a Chernobyl-style catastrophe. Chernobyl, they note, had no containment shell around the reactor.

"The likelihood there will be a huge fire like at Chernobyl or a major environmental release like at Chernobyl, I think that's basically impossible," said James F. Stubbins, a nuclear energy professor at the University of Illinois.

And, some analysts noted, the length of time since the nuclear crisis began indicates that the chemical reactions inside the reactor were not moving quickly toward a complete meltdown.

"We're now into the fourth day. Whatever is happening in that core is taking a long time to unfold," said Mark Hibbs, a senior associate at the nuclear policy program for the Carnegie Endowment for International Peace. "They've succeeded in prolonging the timeline of the accident sequence."

But despite official assurances, many residents expressed fear over the situation.

"First I was worried about the quake," said Kenji Koshiba, a construction worker who lives near the plant. "Now I'm worried about radiation." He spoke at an emergency center in Koriyama, about 40 miles (60 kilometers) from the most troubled reactors.

Overall, more than 1,500 people had been scanned for radiation exposure in the area, officials said.

The U.N. nuclear agency said a state of emergency was also declared Sunday at another complex, the Onagawa power plant, after higher-than-permitted levels of radiation were measured there. It said Japan informed it that all three of those reactors there were under control.

Four nuclear complexes in northeastern Japan have reported some damage from the quake or the tsunami.