Japanese village washed away by tsunami 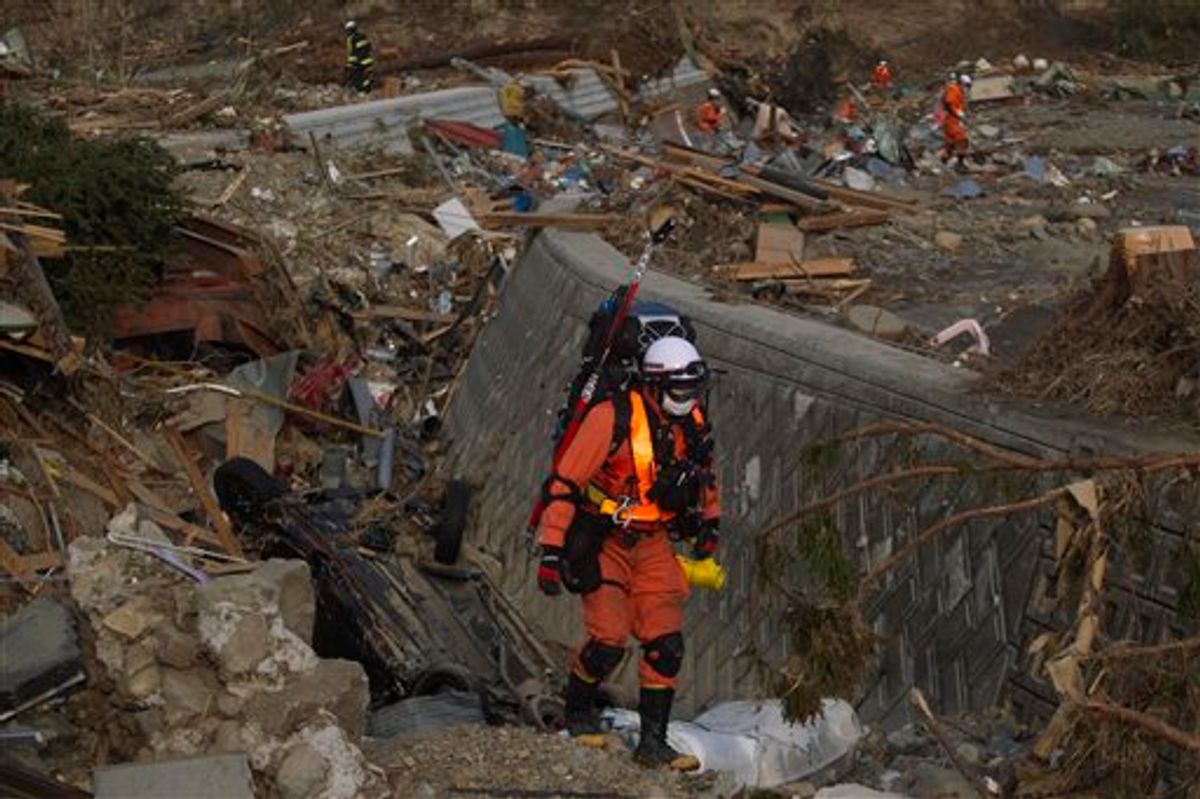 It's hard to believe there was ever a village here at all.

The tsunami that devastated Japan's coast rolled in through a tree-lined ocean cove and obliterated nearly everything in its path in this village of about 250 people and 70 or so houses.

Now, three days later, Saito is a moonscape of death and debris, a hellish glimpse into the phenomenal destruction caused by the killer wave that followed Japan's most powerful earthquake on record and one of the five strongest on Earth in the past 110 years.

In Saito and nearby areas, there is no electricity, no running water. There are no generators humming. The night is pitch black. The buildings still standing are closed. No stores are open. Everything has stopped.

"There is nothing left," villager Toshio Abe told The Associated Press on Monday as firefighters in bright orange and yellow emergency suits hacked through the vast wasteland with pickaxes, searching not for survivors but for the dead. Abe said at least 40 of Saito's people were dead or unaccounted for.

Abe said he was gardening Friday afternoon when he felt the earth shake under his feet. Tsunami sirens blared and a loudspeaker announcement warned people to get to higher ground.

The 70-year-old frantically climbed a hill behind his home about two kilometers, or roughly a mile, from the beach. From his safe vantage point, he watched as, 20 or 30 minutes later, the giant wave arrived with a thunderous roar.

It crashed through what appeared to be a two-story-high sea gate, then careened through the valley, following a two-lane road. He saw it rise up, over and through a bridge and smash into scores of houses, ripping most apart instantly. Other houses, he said, were pulled from their foundations and slammed together.

Hills on both sides channeled the wave another kilometer or so inland, depositing the broken wooden innards of Saito's homes along the road.

"I never thought a tsunami would come this far inland," Abe said. "I thought we were safe."

Abe pointed to a battered concrete foundation amid the flattened landscape. It was his own house. "I will rebuild it," he said, "but not here."

Today, everything in Saito is spoken about in the past tense.

"That was city hall," said 48-year-old construction worker Takao Oyama, gesturing toward a two-story white building that stood alone near the beach, leaning at an angle into a sheet of mud and sand.

"That was our elementary school," he said, pointing to a three-story building a few hundred yards away whose entire facade had been ripped off and was covered in black and yellow ocean buoys. Most everything else has disappeared.

"We struggled, but it is all gone," Oyama said. "Everything is lost."

Behind him, a tranquil tree-covered island could be seen just off the coast. That such violence could come from such a picturesque view seemed contradictory, hard to believe.

One crumpled sign indicated there had once been a train station here, a fact Abe confirmed. It was hard to tell where, though. There were no tracks, no trains, no station.

Crushed bulldozers had been turned upside down. The blue-tiled roof of one house lay across a bridge. The wheels of a vehicle stuck out from under the roof.

A few yards away, a bloated black-spotted white cow lay on the foundation of another vanished home, streams of dried blood running from its pink nose, its eyes looking out over the destruction. Embedded in the hardened silt nearby lay a blue baby stroller, covered in what looked like hay.

"We can never live here again," Oyama said as he rested with his wife on a concrete ledge of the broken tarmac road. During an interview, the ledge trembled as another aftershock hit the region.

Asked how many people died, Oyama shrugged. "We've only seen a few bodies here," he said. "I think everybody was swept out to sea."

In the wider region of Minamisanrikucho, of which Saito is just one coastal village, Abe cited authorities as saying at least 4,500 of the 17,000 inhabitants were believed dead. Police estimated 10,000 dead among the 2.3 million people in the Miyagi prefecture, the Japanese equivalent of a state.

The firefighters who arrived Monday came from an inland town to pick through the rubble. Wearing goggles and dust masks, they carried long pickaxes, chainsaws and backpacks. They looked like spacemen walking across a gigantic lunar garbage dump.

As a Japanese self-defense force helicopter circled overhead, they lifted one hunched and frozen corpse from the mud of a dried canal filled with smashed cars and twisted mountains of corrugated iron sheeting. The tsunami had pulled the dead man's dark blue plaid shirt over his head. His white knuckles were visible, his hand still clenched.

The firefighters covered him in a blue plastic tarp and carried him away on a stretcher. Later, they found another corpse in the rubble and carted that one away, too.

The road that winds through Saito is broken apart in several spots. At one point -- where the tsunami wave stopped -- it leads into a quiet neighborhood of another village where two-story houses stand perfectly intact, their windows not even shattered -- as if nothing ever happened.

There, on the pavement, in front of a small government house-turned-shelter where survivors rested on tatami mats, somebody had scrawled huge white letters in the road for air crews to see: SOS.