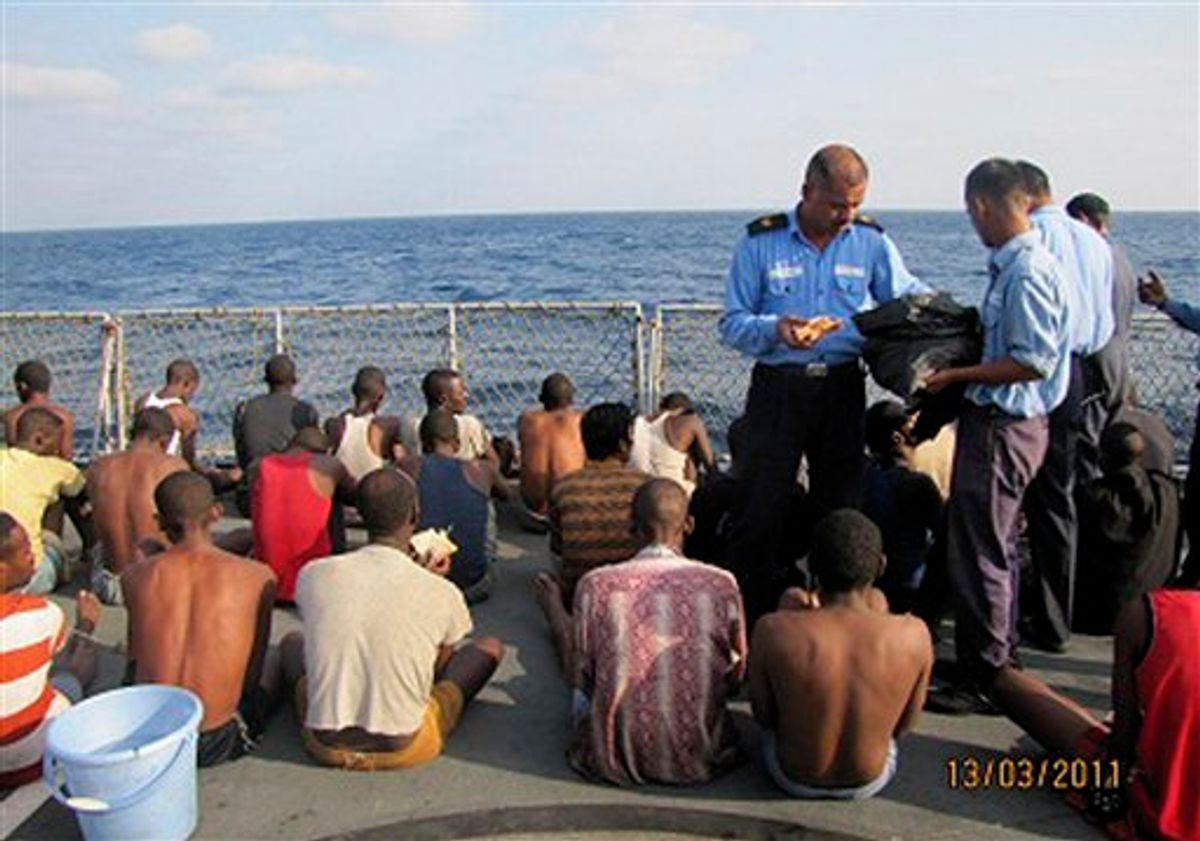 In this photo released by the Government of India Press Information Bureau, Indian naval officers distribute food to the captured pirates aboard an Indian naval ship in the Arabian Sea, off the coast of Kochi, India, Sunday, March 13, 2011. The navy captured 61 pirates from a hijacked boat after a brief gunfight in the Arabian Sea, the military said Monday, March 14, 2011. (AP Photo/ Press Information Bureau) EDITORIAL USE ONLY (AP)
--

Five dozen pirates living on a hijacked ship serving as a roving pirate base jumped into the Arabian Sea on Monday after the Indian navy fired on the vessel in self-defense, the navy said Monday.

The navy captured 61 pirates fleeing the battle and the fire that broke out aboard the hijacked vessel. The battle is the latest example of the piracy trade's turn toward increased violence.

A pirate in Somalia threatened Indian sailors and the government with targeted attacks in retaliation for the arrests.

The Indian navy said a patrol aircraft spotted the mothership Friday while responding to another vessel reporting a pirate attack. The pirates aborted the hijacking attempt and tried to escape on the mothership.

When the Indian ships closed in Sunday night, the pirates fired on them. The hijacked vessel caught fire when the Indian navy returned fire, the navy said.

The pirates had hijacked the Mozambique-flagged Vega 5 in December and had used it as a mothership. Indian sailors rescued 13 crew members from the Vega 5 Sunday night about 700 miles (1,100 kilometers) off Kochi in southern India, the statement said.

The pirates were carrying about 80 to 90 small arms or rifles and a few heavier weapons, likely rocket-propelled grenades, it said. The statement did not describe any casualties among the navy, the fishermen or the pirates in Sunday's clash.

The pirates were being taken to Mumbai, India's financial capital, to be prosecuted for attacking the Indian ships.

Piracy has plagued the shipping industry off East Africa for years, but violence and ransom demands have escalated in recent months. Pirates held some 30 ships and more than 660 hostages as of February.

A self-described pirate in Somalia who gave his name as Bile Hussein said the arrests will lead to "trouble" for Indian sailors and ships.

"They better release them, considering their people traveling in the waters, or we shall jail their people like that," he said. "We are first sending a message to the Indian government of releasing our friends in their hands or else they have to be ready for their citizens to be mistreated in the near future."

The Indian navy's third anti-piracy operation this year followed the capture of 28 Somali pirates last month and another 15 in January. Both groups are to be prosecuted in Mumbai.

Indian warships have been escorting merchant ships as part of international anti-piracy surveillance in the area since 2008.

Several nations, including the United States, are prosecuting pirate suspects captured by their militaries. But other suspects have been released as countries weigh legal issues and other factors.

The prosecutions, the growth of criminal gangs participating in piracy and the ever-increasing ransoms have heightened confrontations.

Five Puntland security forces and two pirates were killed earlier this month during a failed attempt to rescue Danish captives taken from their hijacked yacht to a pirate stronghold in the semiautonomous northern region of Somalia.

Weeks earlier, four Americans on a hijacked yacht were killed by pirates under circumstances that are still unclear. Four U.S. Navy vessels were shadowing the captured boat at the time, and 15 pirate suspects were taken into custody after the gunfire.

The owner of a Bangladeshi-flagged ship that was held for more than three months said that the vessel and 26 crew members were released Monday.

Mehrul Kabir declined to say whether any ransom was paid for the release of the M.V. Jahan Moni, which was seized off the Indian coast while transporting nickel ore from Indonesia to Greece, but the media in Bangladesh reported the pirates were paid $4.2 million.

"All the crew members on board are safe," Kabir told reporters in Dhaka.