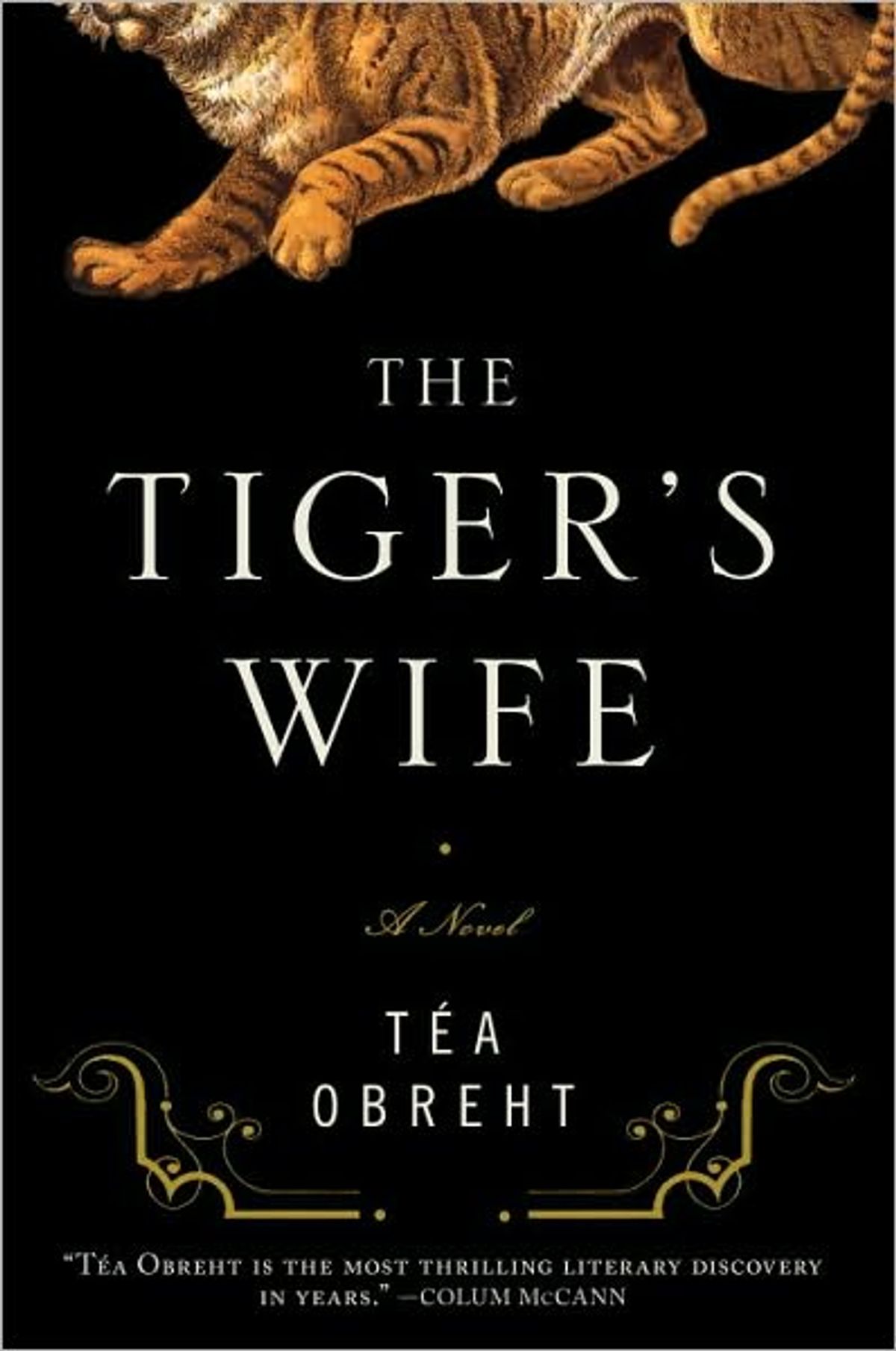 Téa Obreht's fame was virtually assured even before publication of "The Tiger's Wife", her first novel. Excerpts of the book appearing in "The New Yorker" created a stir and earned her inclusion in that magazine's "20 Under 40" list of fiction writers. Now we finally have the book in its entirety.

Encapsulating "The Tiger's Wife" in a single phrase or sentence is impossible. This is a novel in name only, for it comprises an array of widely different tales held together by the flimsiest of conceits, that of the narrator recalling the eventful life and times of her late grandfather. The tales themselves prove individually luscious, though not without an unpleasant cumulative effect. It may strike some as a cavil, but the plain truth is that "The Tiger's Wife," while certainly entertaining and of considerable literary merit, is too rich for its own good: Obreht would have been well-advised to parcel out its constituent elements as stand-alone stories.

Narrated by a young pediatrician named Natalia, the story takes place in an unnamed land clearly modeled after the former Yugoslavia, where Obreht was born and spent her early childhood. In between her current project of inoculating disadvantaged orphans against disease -- "The wails of children in distress are monstrously contagious: the moment one child strikes up, six more follow it" -- Natalia's thoughts drift to her recently deceased grandfather, a prominent surgeon, and his adventuresome life. "Everything necessary to understand my grandfather," she muses, "lies between two stories: the story of the tiger's wife, and the story of the deathless man. These stories run like secret rivers through all the other stories in his life."

And so begins the series of rollicking, meandering, and at times briefly intersecting tales making up this novel, with Natalia alternating between recounting episodes from her grandfather's life and others from hers, some of which also feature her grandfather. In a book brimming with arresting yet overly colorful characters, some tinged with specks of magic realism, the tiger's wife herself stands out both for her gravitas and her believability. A lonely deaf-mute married to an abusive butcher in an isolated mountain village, she is given her derogatory moniker during the Second World War. Her apparent affection for a tiger that has escaped the zoo in the country's bomb-flattened capital and now roams the mountain forests prompts salacious and hostile gossip on the part of the villagers, who eventually decide to kill the majestic creature. Natalia's grandfather, a child enamored of Kipling's "The Jungle Book" and determined to protect the tiger from the frenzied villagers, forges a bond with the battered but stoic and immensely dignified woman spurned by almost everyone else.

Obreht's storytelling impulse is so powerful that she cannot help devising extensive background histories for a host of secondary characters. These tangents distract attention from the main narrative, but often prove intriguing and contain some of the book's most enduring images. In the later chapters devoted to the tiger's wife, for example, Darisa the Bear enters the picture. Before he became a renowned hunter and outstanding taxidermist, Darisa spent many nights of his childhood practicing a crude form of the craft he would later master. Unable to sleep for fear death would pounce and claim his sickly older sister, Darisa tried to lure the Grim Reaper to the cellar, where he labored nightly to restore the appearance of dead cats and other small animals. "If he kept Death there," figured Darisa, "kept it riveted and preoccupied, thought about it while it shared the cellar with him, it would not wander the house."

Natalia's grandfather also grapples with death, but in the form of a deathless man who crosses paths with him at several points in his life. The encounters between the two are predictably strange and surreal, though also surprisingly poignant, none more so than a dinner in a deserted restaurant in a Muslim city called Sarobor about to be pummeled by enemy militia. Obreht is likely thinking of the agonizing Siege of Sarajevo, and Natalia's grandfather, a Christian married to a Muslim from Sarobor, wonders if his time has finally come as he chats with the deathless man over a plate of John Dory fish.

Death, of course, is precisely what the world associated with Yugoslavia in the 1990s, due to a series of brutal wars that involved numerous massacres of civilians. In those sections of "The Tiger's Wife" revolving around Natalia's teens and early adulthood, when her country splits into several, Obreht memorably depicts the terror, absurdity, and tedium of war. Natalia emerges from these experiences a tough but contemplative woman, and her observations on the nature of conflict are profound:

When your fight has purpose -- to free you from something, to interfere on the behalf of an innocent -- it has a hope of finality. When the fight is about unraveling -- when it is about your name, the places to which your blood is anchored, the attachment of your name to some landmark or event -- there is nothing but hate, and the long, slow progression of people who feed on it and are fed it, meticulously, by the ones who come before them. Then the fight is endless, and comes in waves and waves, but always retains its capacity to surprise those who hope against it.

If "The Tiger's Wife" represents the literary exuberance of a young writer -- Obreht is in her mid-twenties -- the author's future novels may well be more restrained, without losing their luster. Indeed, based on what is on display here, it is difficult to imagine that Obreht will ever grow stingy when it comes to augmenting her central narrative with enchanting subplots and secondary storylines. And that's fine: if Obreht narrows her focus and curtails her embellishments, her undeniable flair for storytelling could produce a magnificent novel. Until then, "The Tiger's Wife" will seduce and confound, fascinate and exasperate.