Officials have confirmed 3,300 dead after earthquake, expect as many as 10,000 in just one region 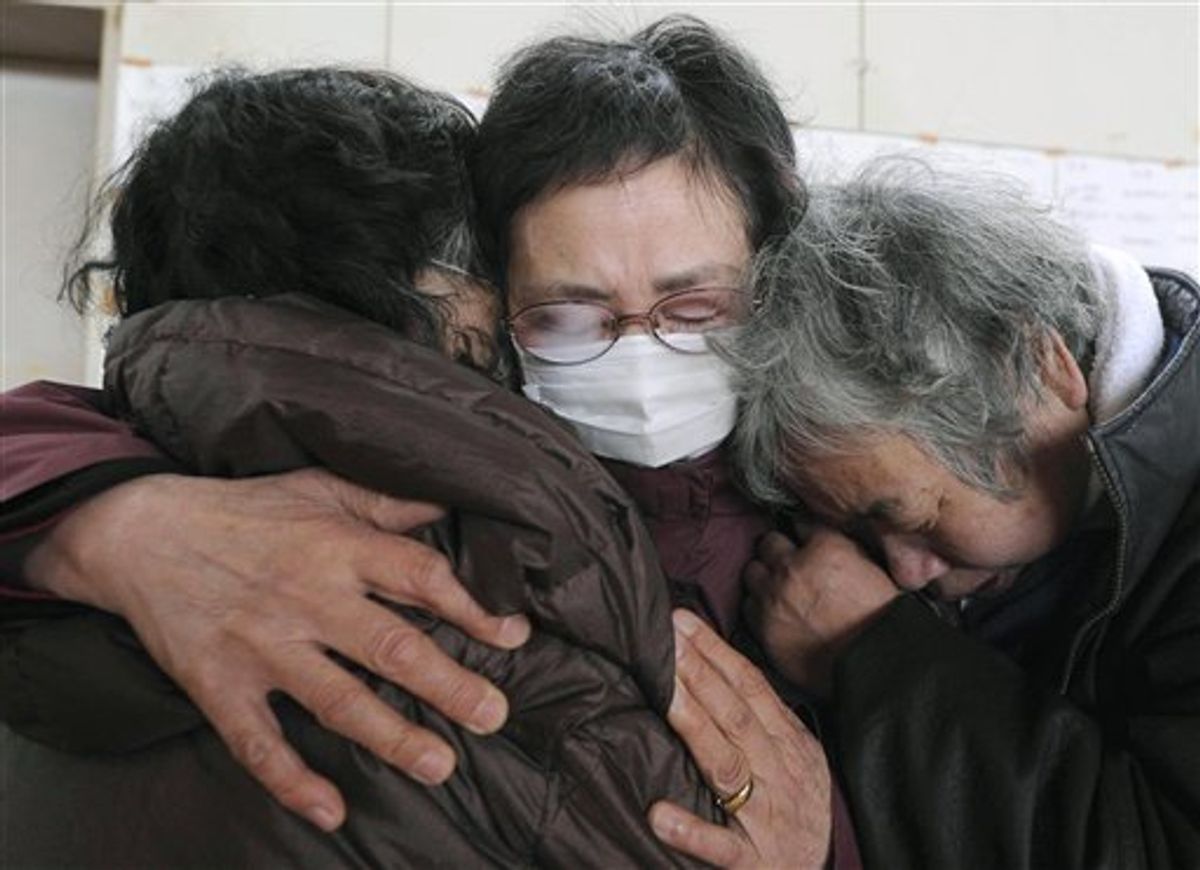 A nuclear power plant damaged by fire and explosions emitted a burst of radiation Tuesday, panicking an already edgy Japan and leaving the government struggling to contain a spiraling crisis caused by last week's earthquake and tsunami.

Radiation levels in areas around the nuclear plant, which rose early in the afternoon, appeared to subside by evening, officials said. But the unease remained in a country trying to recover from the massive disasters that are believed to have killed more than 10,000 people and battered the world's third-largest economy.

The leak caused the government to order 140,000 people living within 20 miles (30 kilometers) of the plant to seal themselves indoors to avoid exposure and declared a ban on commercial air traffic through the area. Worries about radiation rippled through Tokyo and other areas far beyond that cordon. The stock market plunged for a second day, dropping 10 percent.

The troubles cascaded Tuesday at the Fukushima Dai-ichi plant, where there have already been explosions at two reactor buildings since Friday's disasters. An explosion at a third reactor blasted a 26-foot (8-meter) hole in the building and, experts said, damaged a vessel below the reactor, although not the reactor core. Three hours later, a fire broke out at a fourth reactor, which had been offline for maintenance.

In a nationally televised address, Prime Minister Naoto Kan said radiation had seeped from four of the plant's six reactors. The International Atomic Energy Agency said Japanese officials informed it that the fire was in a pool where used nuclear fuel rods are stored and that "radioactivity is being released directly into the atmosphere." Long after the fire was extinguished, a Japanese official said the pool might still be boiling.

Depending on how bad the blast was at Unit 2, experts said more radioactive materials could seep out. If the water in the storage pond in Unit 4 boils away, the fuel rods could be exposed, leaking more virulent radiation.

Experts noted that much of the leaking radiation was apparently in steam from boiling water -- and the falling radiation levels suggest the situation could be stabilizing.

Government spokesman Yukio Edano said the radiation leak potentially affected public health. But authorities and experts said the risks to the public diminished the farther the distance from the plant. At its most intense, the leak released a radioactive dose in one hour at the site 400 times the amount a person normally receives in a year. Within six hours, that level had dropped dramatically.

A person would have to be exposed to that dose for 10 hours for it to be fatal, said Jae Moo-sung, a nuclear engineering expert at Seoul's Hanyang University.

Radiation elsewhere never reached that level. In Tokyo, 170 miles (270 kilometers) to the southwest, authorities reported radiation levels nine times a normal level -- too small, officials said, to threaten the 39 million people in and around the capital. Weather patterns helped, shifting Tuesday night to the southeast, blowing any potential radiation from the plant toward the sea.

"It's not good, but I don't think it's a disaster," said Steve Crossley, an Australia-based radiation physicist. "If the radioactive material gets out, it's a major problem. That doesn't appear to be happening in Japan, and that's the big difference. As long as you are not near it, it doesn't pose a health risk."

Though Kan and other officials urged calm, the developments fueled a growing panic in Japan and around the world amid widespread uncertainty over what would happen next. In the worst case scenario, one or more of the reactor cores would completely melt down, a disaster that could spew large amounts of radioactivity into the atmosphere.

Foreigners began leaving in larger numbers. China organized an evacuation of its citizens from Japan's stricken northeast. The U.S. urged Americans to avoid travel to Japan. Austria moved its embassy from Tokyo to Osaka. Lufthansa diverted its two daily flights to Tokyo to other Japanese cities.

The U.S. Navy shifted some ships from Japan's east coast to western waters to avoid hazards from debris dragged into the sea by the tsunami and to be away from any radiation plume. One ship at its base south of Tokyo detected low levels of radiation from the Fukushima plant.

In evacuation centers for people living near the plant, Japanese worried about radiation contamination, calling it an unseen threat, and complained that the government was not forthcoming with information.

"Nuclear power is the most frightening, even more than a tsunami. The government, the ruling party, administrators, nobody tells us, the citizens, what is really happening," said Isao Araki, 63, at an evacuation center.

The radiation fears added to the catastrophe that has been unfolding in Japan. Four days after the 9.0-magnitude earthquake and tsunami, millions of people strung out along the east coast had little food, water or heat, and already chilly temperatures dropped further as a cold front moved in. Up to 450,000 people are in temporary shelters.

Officials have only confirmed about 3,300 deaths, but officials have said the toll was likely to top 10,000 in one of the four hardest-hit areas. Experts involved in the 2004 Asian tsunami said there was no question more people died, despite Japan's high state of preparation, and like the earlier disaster, many thousands may never be found.

In a rare bit of good news, rescuers found two survivors Tuesday, one of them a 70-year-old woman whose house was torn off its foundation by the tsunami.

Mostly, though, search teams found few signs of life. More than 200 rescue crews from the U.S. and Britain poured Tuesday into the coastal city of Ofunato, finding little but rubble and people looking for lost possessions. Whole city blocks lay flattened. A yacht came to rest atop the remains of a two-story gas station.

Amid the debris, 32-year-old Ken Suioya used a crowbar to try to force opon a safe, which he said had been thrown from his father's destroyed home and into a trench.

"My house has gone, our family's restaurant has gone, our car has gone -- this is part of what we have left," he said, gesturing to unyielding gray metal.

As rescue teams and survivors hunted through ruined communities and officials struggled to deliver supplies to the displaced, urgent attention was focused on the Fukushima Dai-ichi nuclear complex, the most severely damaged of three nuclear plants on the battered coast.

Three of the plant's six reactors were out of service for maintenance at the time of Friday's disasters, which compromised cooling systems at all of the reactors. Before Tuesday's fire in Unit 4's storage pool, workers were desperately trying to pump seawater to cool the fuel rods in the three active reactors.

Conditions in Unit 2 are less clear after a blast near a suppression pool, into which fuel rods are plunged to cool them and which also serves as an emergency receptical for excess steam, said plant owner Tokyo Electric Power Co. The nuclear core was not damaged but the bottom of the surrounding container may have been, said Shigekazu Omukai, a spokesman for Japan's nuclear safety agency.

The IAEA's head, Yukoiya Amano, urged the Japanese government to provide better information to the agency about the situation.

Temperatures in the two other offline reactors, units 5 and 6, were slightly elevated, said Edano, the chief cabinet secretary. Fourteen pumps have been brought in to get seawater into the other reactors, and technicians were trying to figure out how to pump water into Unit 4, where the storage pool fire occurred. Helicopters may be one solution.

About 70 workers remained at the complex, struggling with its myriad problems. The workers, all in protective gear, are being rotated in and out of the danger zone quickly to reduce their radiation exposure.

The prime minister and other officials warned there is a danger of more leaks and ordered a wider emergency cordon, telling people within 20 miles (30 kilometers) of the Fukushima plant to stay indoors to avoid exposure that could make people sick.

"Please do not go outside. Please stay indoors. Please close windows and make your homes airtight," Edano told residents in the danger zone.

The multiple problems at Fukushima appear to be the nuclear industry's most severe accident in 25 years, since the meltdown at the Chernobyl power plant in the former Soviet Union.

Experts said that differing designs in the reactors made it unlikely that Fukushima would degenerate into a widespread contamination problem. The biggest difference is that in Chernobyl's case the reactor core caught fire and there was no containment shell -- thick reinforced concrete around the reactor.

"We're a long way from fuel material coming out of the reactor in the way it did in Chernobyl," said Crossley, the physicist. "In this case, the fuel is still contained."

Physicist Edwin Lyman of the Union of Concerned Scientists, an advocacy group that pushes for nuclear industry safety, said it was unlikely that a plume from the Fukushima plant would rise as high as the one from Chernobyl, which means that radioactive material would be deposited closer to the site.

"That may spare Tokyo from the worst of it," he said.

Yuasa reported from Tokyo. Associated Press writer Elaine Kurtenbach in Tokyo and David Stringer in Ofunato contributed to this report.