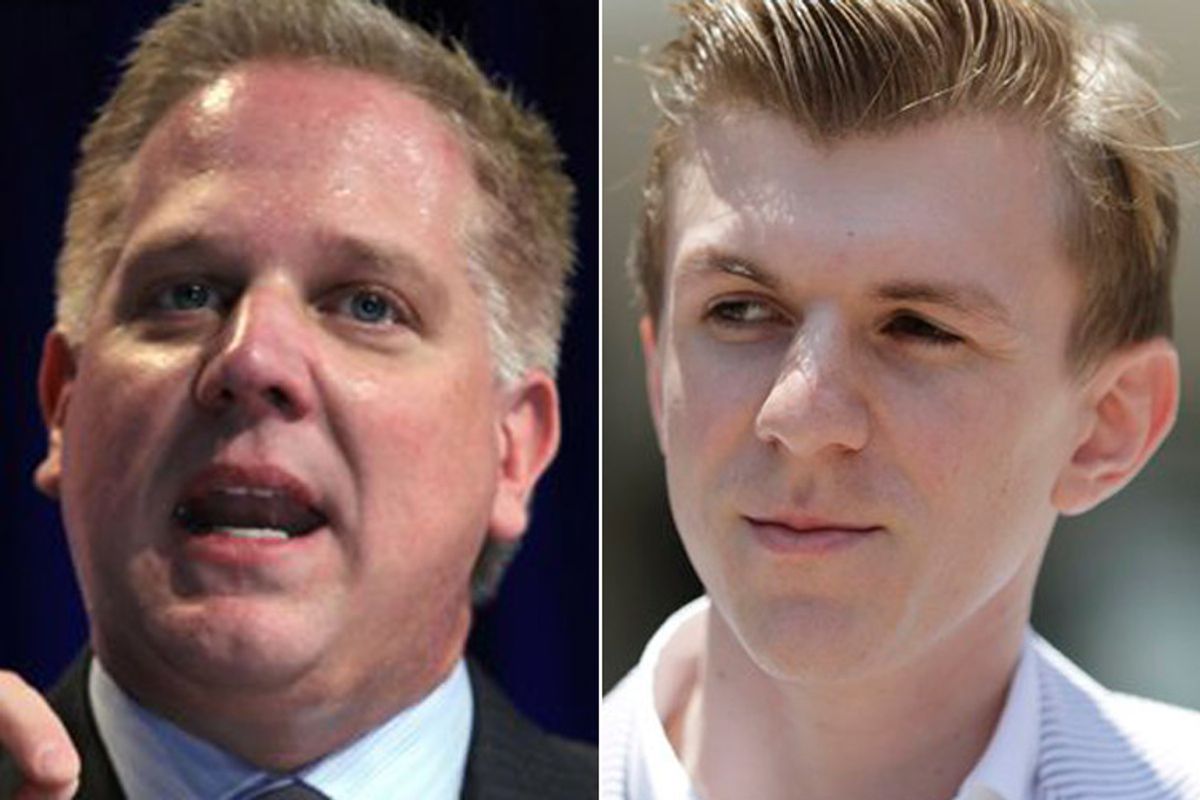 The Blaze compared the edited and ready-for-air video with the lengthy unedited raw video of the NPR executives talking with the pretend Muslims attempting to goad them into saying outrageous things. The analysis found numerous shady and misleading edits and elisions. The report all but absolved former NPR fundraiser Ron Schiller of saying anything all that offensive to conservative Americans. The Blaze even reveals that the "raw" video was altered and censored for reasons unknown.

The Blaze's Scott Baker concludes, "even if you are of the opinion, as I am, that undercover reporting is acceptable and ethical in very defined situations, it is another thing to approve of editing tactics that seem designed to intentionally lie or mislead about the material being presented."

This post went up days ago, and Beck has been greatly enjoying the praise and attention he's received for being so fair and balanced. And then, as Politico reports, he lightly trashed O'Keefe and Andrew Breitbart:

“The problem with this whole thing is does James O’Keefe have enough credibility to continue to do” undercover video journalism? Beck asked his listeners. That kind of journalism, he said, is "just really not something that you necessarily want to get into. But if you do it, you damn well better not lie on the tape. You don’t now take what you have and edit something to make them say something that they didn’t say. I mean, you have no credibility then."

Beck went on to claim he'd been "cautious" with the ACORN videos (which is stretching it) and made reference to the Shirley Sherrod incident, which is generally not talked about on the right except to say that somehow Breitbart was totally right.

Andrew Breitbart is more responsible than anyone else for transforming James O'Keefe from a small-time Young Republican stunt-puller to a major figure in the conservative media sphere, and so Breitbart is connected to all of O'Keefe's schemes, even though he always claims that O'Keefe is an independent operator. While he will never, ever admit it, O'Keefe's blatantly deceptive editing practices have embarrassed Breitbart before -- in addition to the Shirley Sharrod mess, which fatally damaged Breitbart's credibility in the non-right-wing press, Breitbart didn't seem to know himself that James hadn't actually entered those ACORN offices dressed in his Ricky's pimp costume -- which may account for why Breitbart's "Big" sites didn't play their usual hype role with the NPR videos.

(Another wrinkle: Scott Baker, the author of the Blaze's piece, is a former Breitbart associate.)

Just as GOPers will only trash national jokes like Michele Bachmann off-the-record or when they absolutely have to, members of the right-wing press and the conservative blogosphere will only publicly criticize prominent right-wing media figures when they stop commanding a decent following. So no one on talk radio or at Fox will say that they're embarrassed by O'Keefe -- or that Breitbart's websites publish an endless stream of barely literate garbage -- so long as those sites remain in good standing with the movement. But as Beck's ratings have fallen and as his nightly stories have grown less and less useful to the movement, he's come under sustained attack from various "grown-ups" in the brotherhood of conservative pundits.

Looks like he won't go out without taking a few people with him, though! Not that Fox or anyone else want to give his new mission any attention.