The disaster has produced unexpectedly strong work from Anderson Cooper, Rachel Maddow -- and even Glenn Beck 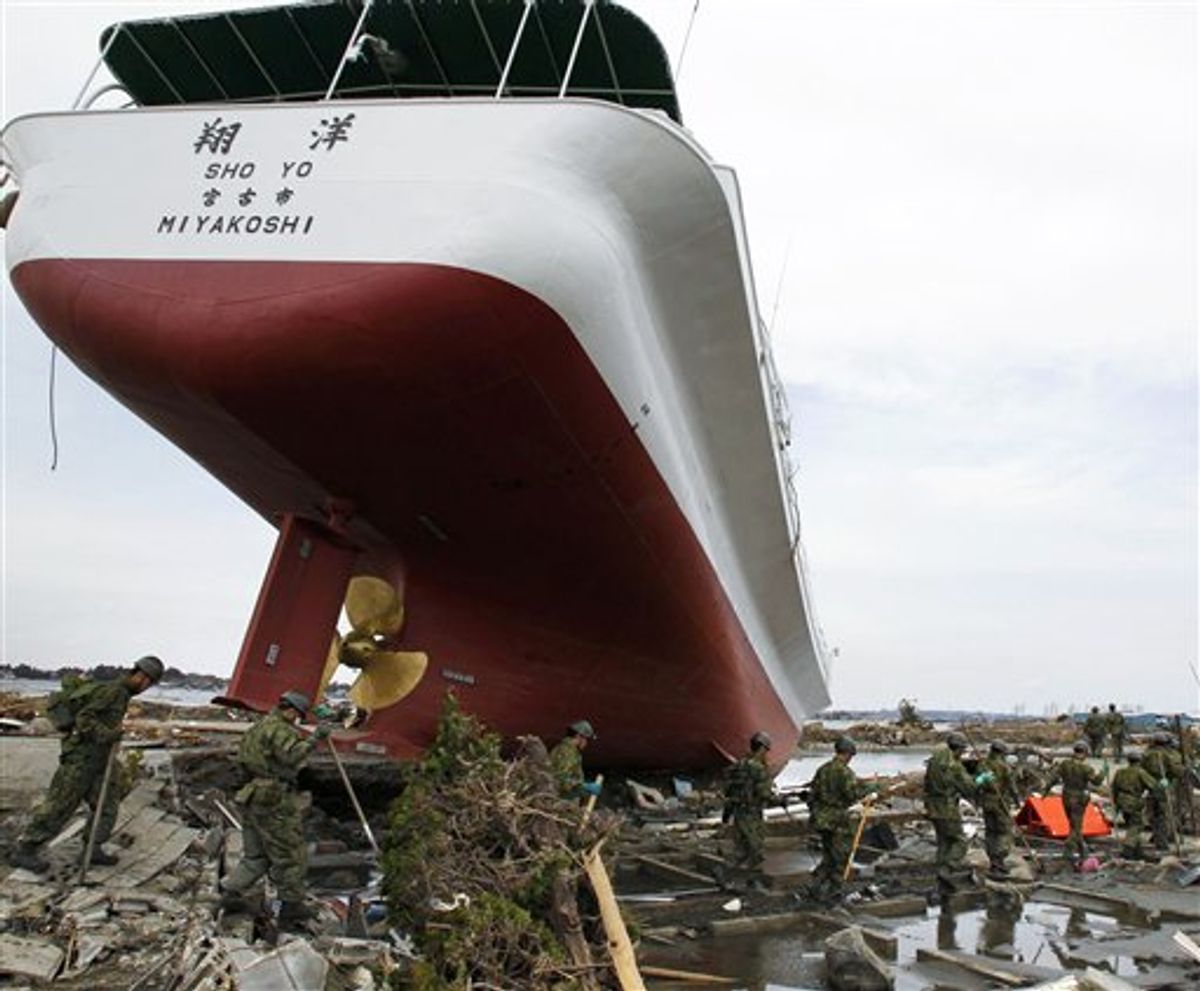 The footage coming out of Japan is so horrifying that watching anything else on TV right now feels somehow wrong. Between the earthquake, the tsunami and the ongoing disaster at Fukushima nuclear plant, it's as if several different apocalyptic scenarios have somehow been merged into one.  The sheer, awesome incomprehensibility of what's happening seems to have slapped cable news across its normally smug and complacent face and made it, if not consistently good, then at least sober. There's reporting and commentary happening right on-screen right now, of a type that throws cable news' business-as-usual triviality and sleaziness into unflattering relief. Random acts of journalism are being committed.

Anderson Cooper's reports on "Anderson Cooper 360" have been plain-spoken and thoughtful, as the anchor's on-location reporting so often is. (Getting out of the studio and into the field seems to center him.) Cooper was in especially good form last night, describing the day-to-day impact of disaster -- the effect of power outages and the disruption of sanitation and communications. One of the more chilling images was a billboard at a visitor center where people left notes asking for information on loved ones' whereabouts -- a 19th-century substitute for the high-tech communication unavailable to so many Japanese. In this moment, as elsewhere in his disaster coverage, Cooper represented the viewer without making himself the story. (That's more than can be said for Ann Curry of MSNBC and NBC, whose reports from Japan have had a whiff of Kent Brockman.)

There have been some good in-studio explanatory pieces, too.  Rachel Maddow's segment on MSNBC last night explaining the word "meltdown" was prefaced by a reminder that words have meaning and should be used with care. "There's a reason why, in the English language -- particularly in American English -- we use the word 'meltdown' so often as a metaphor," she said. "It always sounds like hyperbole. It always sounds like you are overstating the case no matter what context you use that word in. But when we mean the word literally, it is worth being precise about it."

Glenn Beck, of all people, did a better job of explaining the inner workings of a nuclear reactor on his chalkboard last night than I've seen more respectable programs do with glitzy 3-D computer graphics. Too bad it was in the service of reassuring people that the disaster wasn't as bad as it was made out to be by rival news outlets. And was followed by a typically nonsensical and tone-deaf editorial about how supposedly left-wing media were using the power plant disaster as a pretext to mount an ideological jihad against nuclear energy -- as if raising concerns about widespread contamination, cancer and mutation was the same thing as playing Chicken Little. Beck even scoffed at the notion of saying Fukushima was worse than Three Mile Island and confidently stated that there was no loss of life following the latter disaster, which is only true if you don't count increased infant mortality and cancer rates in the vicinity of the plant (MSNBC pointed out his faulty logic almost immediately). But even in this case, common sense eventually prevailed; the ticker tape on this morning's "Fox and Friends" included the summary, "Japan nuclear plant disaster considered worse than Three Mile Island."

Still, it seems incongruous -- weird at times -- to see TV news depart from this horror show and give us news about something else. Yes, of course it's necessary -- this is the United States, Japan is on the other side of the world, and for us at least, life goes on in more or less typical fashion. And yet the immense, in some ways unprecedented magnitude of the disaster makes everything else on TV, fiction and nonfiction, feel inconsequential. It's hard to watch coverage of the ongoing (and historically important) labor struggle in Wisconsin or the budget battles in Washington without having one of those searing images from Japan pop into your mind's eye and displace the present subject of discussion.  The mushroom cloud-shaped plume of smoke over the reactor; houses and cars being swept along on brown waters; fishing ships tumbling over sea walls; men, women and children walking and in some cases swimming through the remains of cities, yelling the names of loved ones who haven't been heard from in days. Thousands are dead, tens of thousands displaced. Untold millions of lives are disrupted. Psychologically this could be as collectively traumatizing as Hiroshima and Nagasaki.

It's so overwhelming that the pretense of objectivity seems to be momentarily vanishing from the minds of TV news anchors and reporters and commentators, much as it did during coverage of 9/11 and Hurricane Katrina. This is not a celebrity scandal or a policy abstraction; it's an earthquake so intense that it shortened a day, sparked a tsnunami and caused power outages that may have led to a nuclear mishap. In the past few days, more and more TV journalists have begun their reports and summaries by expressing the deepest sorrow for the people of Japan. Some have said the names of friends and loved ones trapped in disaster areas. A few speakers have been on the verge of tears. You can't be detached from a story like this one. It's just too much.