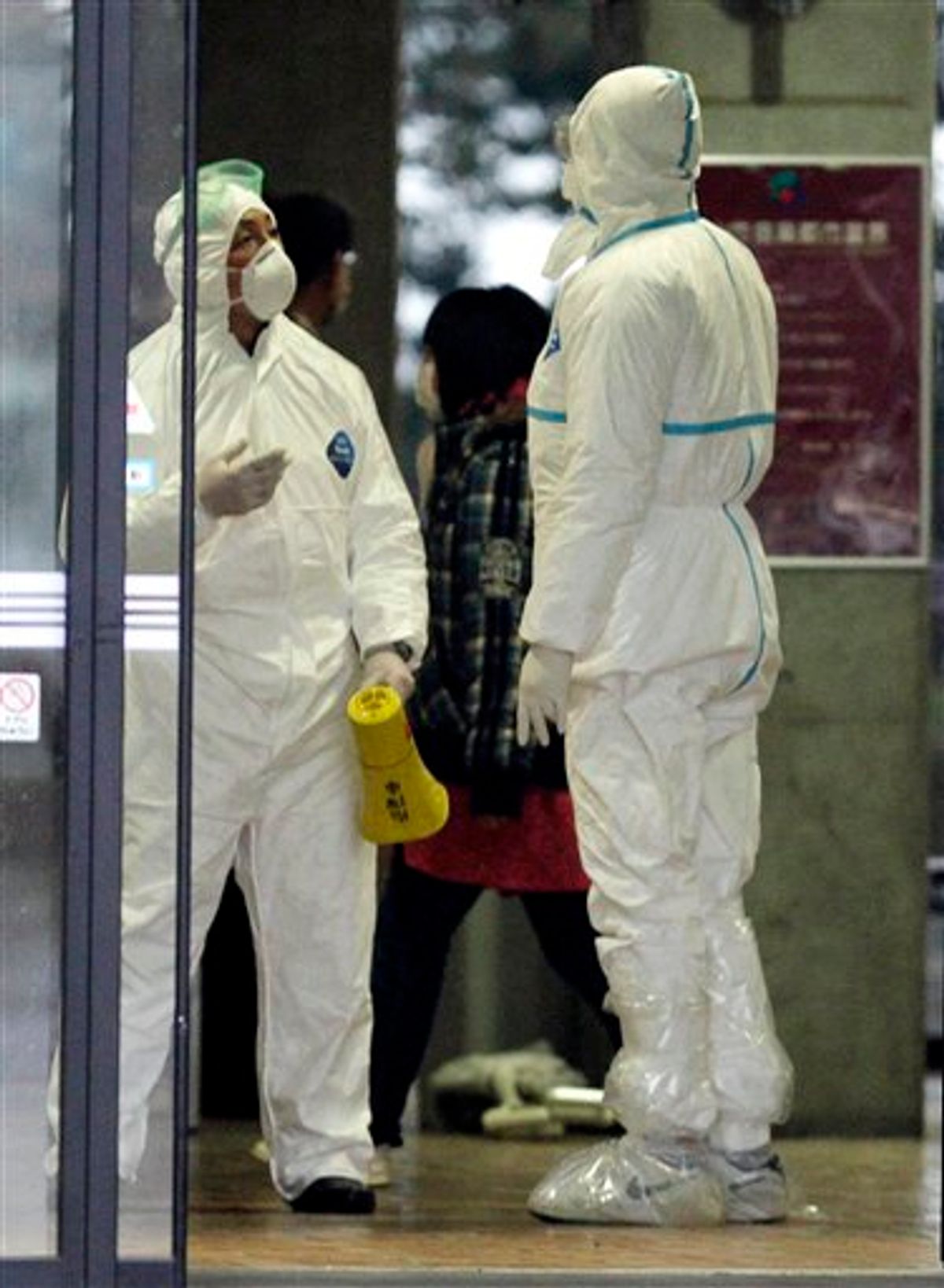 A Japanese nuclear safety official says the water inside the waste fuel storage pool for a damaged reactor at an atomic power plant may be boiling.

Hidehiko Nishiyama of the economy ministry that oversees nuclear safety told reporters Tuesday that "we cannot deny the possibility of water boiling" in the pool.

Nishiyama sought to avoid commenting on the potential risks from the rising temperatures caused by a failure of systems required to keep the spent fuel rods cool. He said the plant's operator is considering what to do about the problem.

Dangerous levels of radiation leaking from a crippled nuclear plant forced Japan to order 140,000 people to seal themselves indoors Tuesday after an explosion and a fire dramatically escalated the crisis spawned by a deadly tsunami.

In a nationally televised statement, Prime Minister Naoto Kan said radiation has spread from four reactors of the Fukushima Dai-ichi nuclear plant in Fukushima state, one of the hardest-hit in Friday's 9.0-magnitude earthquake and the ensuing tsunami that has killed more than 10,000 people, plunged millions into misery and pummeled the world's third-largest economy.

Though Kan and other officials urged calm, Tuesday's developments fueled a growing panic in Japan and around the world amid widespread uncertainty over what would happen next. In the worst case scenario, the reactor's core would completely melt down, a disaster that could spew large amounts of radioactity into the atmosphere.

The radiation fears added to the catastrophe that has been unfolding in Japan, where at least 10,000 people are believed to have been killed and mllions of people have spent four nights with little food, water or heating in near-freezing temperatures as they dealt with the loss of homes and loved ones.

Asia's richest country hasn't seen such hardship since World War II. The stock market plunged for a second day and a spate of panic buying saw stores running out of necessities, raising government fears that hoarding may hurt the delivery of emergency food aid to those who really need it.

In a rare bit of good news, rescuers found a 70-year-old woman alive in her swept-away home four days after the tsunami flattened much of Japan's northeastern coast.

After Tuesday's fire and separate explosion at two reactors in the Fukushima Dai-ichi nuclear plant, officials just south of the area reported up to 100 times the normal levels of radiation, Kyodo News agency reported. While those figures are worrying if there is prolonged exposure, they are far from fatal.

Tokyo reported slightly elevated radiation levels, but officials said the increase was too small to threaten the 39 million people in and around the capital, about 170 miles (270 kilometers) away. Closer to the stricken nuclear complex, the streets in the coastal city of Soma were empty as the few residents who remained there heeded the government's warning to stay indoors.

Kan and other officials warned there is danger of more leaks and told people living within 19 miles (30 kilometers) of the Fukushima Dai-ichi complex to stay indoors to avoid exposure that could make people sick.

Weather forecasts for Fukushima were for snow and wind from the northeast Tuesday evening, blowing southwest toward Tokyo, then shifting and blowing west out to sea. That's important because it shows which direction a possible nuclear cloud might blow.

The nuclear crisis is the worst Japan has faced since the atomic bombing of Hiroshima and Nagasaki during World War II. It is also the first time that such a grave nuclear threat has been raised in the world since a nuclear power plant in Chernobyl, Ukraine exploded in 1986.

The International Atomic Energy Agency said Tuesday that Japanese officials told it that the reactor fire was in the storage pond -- a pool where used nuclear fuel is kept cool -- and that "radioactivity is being released directly into the atmosphere."

Workers were desperately trying to stabilize three reactors at the power plant that exploded in the wake of Friday's quake and tsunami, after losing their ability to cool down and releasing some radiation. Since the quake, engineers have been injecting seawater into the reactors as a last-ditch coolant.

A fourth reactor that had been shut down before the quake caught fire Tuesday and more radiation was released, Edano said.

The fire was put out. Even though the fourth reactor was shut down, the fire there was believed to be the source of the elevated radiation.

"It is likely that the level of radiation increased sharply due to a fire at Unit 4," Edano said. "Now we are talking about levels that can damage human health. These are readings taken near the area where we believe the releases are happening. Far away, the levels should be lower."

He said another reactor whose containment building exploded Monday had not contributed greatly to the increased radiation. Edano said that reactor, and another, Unit 3, had stabilized but the status of Unit 2 was unclear.

Temperatures in two other reactors, units 5 and 6, were slightly elevated, Edano said.

"The power for cooling is not working well and the temperature is gradually rising, so it is necessary to control it," he said.

Officials said 50 workers, all of them wearing protective radiation gear, were still trying to pump water into the reactors to cool them. They say 800 other staff were evacuated. The fires and explosions at the reactors have injured 15 workers and military personnel and exposed up to 190 people to elevated radiation.

In Tokyo, slightly higher-than-normal radiation levels were detected Tuesday but officials insisted there are no health dangers.

"The amount is extremely small, and it does not raise health concerns. It will not affect us," Takayuki Fujiki, a Tokyo government official said.

Kyodo reported that radiation levels nine times higher than normal were briefly detected in Kanagawa prefecture near Tokyo and that the Tokyo metropolitan government said it had detected a small amount of radioactive materials in the air.

Edano said the radiation readings had fallen significantly by the evening.

Japanese government officials are being rightly cautious, said Donald Olander, professor emeritus of nuclear engineering at University of California at Berkeley. He believed even the heavily elevated levels of radiation around Dai-ichi are "not a health hazard." But without knowing specific dose levels, he said it was hard to make judgments.

"Right now it's worse than Three Mile Island," Olander said. But it's nowhere near the levels released during Chernobyl.

On Three Mile Island, the radiation leak was held inside the containment shell -- thick concrete armor around the reactor. The Chernobyl reactor had no shell and was also operational when the disaster struck. The Japanese reactors automatically shut down when the quake hit and are encased in containment shells.

Olander said encasing the reactors in a concrete sarcophagus -- the last-ditch effort done in Chernobyl -- is far too premature. Operators need to wait until they cool more, or risk making the situation even worse.

The death toll from last week's earthquake and tsunami jumped Tuesday as police confirmed the number killed had topped 2,700, though that grim news was overshadowed by a deepening nuclear crisis. Officials have said previously that at least 10,000 people may have died in Miyagi province alone.

Millions of people spent a fourth night with little food, water or heating in near-freezing temperatures as they dealt with the loss of homes and loved ones. Asia's richest country hasn't seen such hardship since World War II.

With snow and freezing temperatures forecast for the next several days, shelters were gathering firewood to burn for heat, stacking it under tarps and tables.

Though Japanese officials have refused to speculate on the death toll, Indonesian geologist Hery Harjono, who dealt with the 2004 Asian tsunami, said it would be "a miracle really if it turns out to be less than 10,000" dead.

Rescuers were heartened Tuesday to find one survivor. Osaka fire department spokesman Yuko Kotani says a 70-year-old woman was found inside her house that was washed away by the tsunami in northeastern Japan's Iwate prefecture. The rescuers from Osaka, in western Japan, were sent to the area for disaster relief.

Kotani said the woman was conscious but suffering from hypothermia and is being treated at a hospital. She would not give the woman's name.

The impact of the earthquake and tsunami dragged down stock markets. The benchmark Nikkei 225 stock average plunged for a second day Tuesday, nose-diving more than 10 percent to close at 8,605.15 while the broader Topix lost more than 8 percent.

To lessen the damage, Japan's central bank made two cash injections totaling 8 trillion yen ($98 billion) Tuesday into the money markets after pumping in $184 billion on Monday.

Initial estimates put repair costs in the tens of billions of dollars, costs that would likely add to a massive public debt that, at 200 percent of gross domestic product, is the biggest among industrialized nations.

Yuta Tadano, a 20-year-old pump technician at the Fukushima plant, said he was in the complex when quake hit.

"It was terrible. The desks were thrown around and the tables too. The walls started to crumble around us and there was dust everywhere. The roof began to collapse.

"We got outside and confirmed everyone was safe . Then we got out of there. We had no time to be tested for radioactive exposure. I still haven't been tested," Tadano told The Associated Press at an evacuation center.

"I worry a lot about fallout. If we could see it we could escape, but we can't," said Tadano, cradling his 4-month-old baby, Shoma.

The Dai-ichi plant is the most severely affected of three nuclear complexes that were declared emergencies after suffering damage in Friday's quake and tsunami, raising questions about the safety of such plants in coastal areas near fault lines and adding to global jitters over the industry.