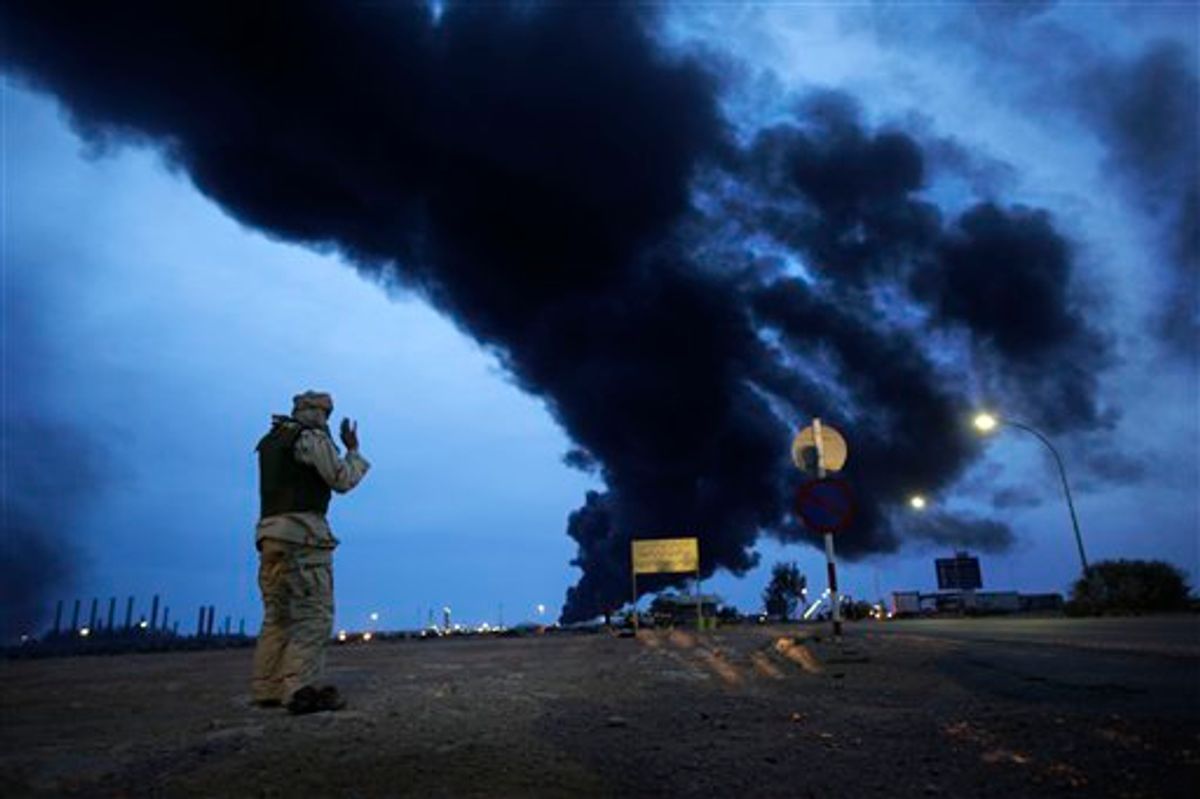 In this photo taken during a government-organised visit for foreign media, a pro-Gadhafi fighter makes his evening prayers in the desert as a plume of smoke rises from the burning oil refinery in Ras Lanouf, 380 miles (615 kilometers) southeast of the capital Tripoli, in Libya Saturday, March 12, 2011. (AP Photo/Ben Curtis) (AP)
--

Moammar Gadhafi's forces overwhelmed rebels in a strategic eastern city, hammering them with airstrikes, missiles, tanks and artillery Tuesday in an assault that sent residents fleeing and threatened to open the way for an all-out government offensive on the opposition's main stronghold in the east, Benghazi.

In desperation, rebels sent up two antiquated warplanes that struck a government ship bombarding Ajdabiya from the Mediterranean. But as tanks rolled into the city from two directions and rockets relentlessly pounded houses and shops, the ragtag opposition fighters' defenses appeared to break down. Some lashed out at the West for failing to come to their aid with a no-fly zone.

"This is a mad man, a butcher," one rebel fighter said of Gadhafi, speaking to The Associated Press by telephone as explosions were heard in the background. "It's indiscriminate fire."

"The world is sleeping," he said. "They (the West) drunk of Gadhafi's oil and now they won't stand against him. They didn't give us a no-fly zone."

Residents of the city of 140,000 streamed out, fleeing toward Benghazi, 140 miles (200 kilometers) to the northeast. But warplanes and artillery were striking roads in and out of Ajdabiya, several witnesses and fighters said. Some reported private cars had been hit, but the reports could not be independently confirmed. They spoke on condition of anonymity for fear of retaliation from Gadhafi' regime.

The collapse of Ajdabiya, 480 miles (800 kilometers) southeast of Tripoli, would open the gateway for Gadhafi's forces to the long stretch of eastern Libya that has been in the control of the opposition since early on in the month-long uprising. Only 10 days ago, the rebellion had appeared capable of sweeping Gadhafi out after 41 years in power: It had a seemingly unshakable hold on the eastern half of the country and control of several cities in the west close to the capital and was poised to send fighters on a march on Tripoli.

But Gadhafi's regime has reversed the tide by relying on a military that -- while apparently not much larger than rebel forces -- is far better armed and organized, able to unleash fearsome bombardments from sea, air and land. With the fall of Ajdabiya, the regime forces would be able to bring that power to bear on Benghazi, Libya's second largest city and the de facto capital of the opposition.

Gadhafi warned rebels: "There are only two possibilities: Surrender or run away."

He said he was not like the Tunisian or Egyptian leaders, who fell after anti-government protests. "I'm very different from them," he said in an interview with the Italian newspaper Il Giornale. "People are on my side and give me strength."

Libyan state television aired calls for the opposition to stop fighting, apparently hoping to sway populations in the east away from support of the rebels. "Those who are asking your to put down your arms want peace for you, so please help them and stop shedding blood," the broadcaster said. "Libya is for everyone and by everyone. So let God's word be the highest and the word of evil be the lowest."

Europe and the United States, meanwhile, were tossing back and forth the question of whether to impose a no-fly zone that the opposition has pleaded for to make the fight more even.

On Tuesday, top diplomats from some of the world's biggest powers deferred to the U.N. Security Council to take action against Libya, as France and Britain failed to win support for a no-fly zone in the face of German opposition and U.S. reluctance. France said the Group of Eight agreed that a new U.N. resolution should be adopted by week's end with measures to help Libyan rebels.

The measures could include increased enforcement of an arms embargo and expanding the freezing of Libyan assets. A resolution for a no-fly zone could be put forward as well, diplomats said -- but they added that much depended on whether the Arab League, which is pressing for a zone, was ready to seriously participate in its establishment and operation.

French Foreign Minister Alain Juppe suggested in a radio interview Tuesday that events on the ground in Libya have already outpaced diplomatic efforts.

"If we had used military force last week to neutralize some airstrips and the several dozen planes that they have, perhaps the reversal taking place to the detriment of the opposition wouldn't have happened," Juppe told Europe-1 radio.

Earlier Monday, Gadhafi's forces recaptured the last rebel-held city west of Tripoli. With the victory in Zwara, a seaside town about 30 miles (50 kilometers) from the Tunisian border, the only other significant opposition-held city the western half of the country was Misrata -- which for days has been under a punished blockade, its population running out of supplies.

"We are short on antibiotics and surgery supplies and disposable equipment," said a doctor in Misrata, Libya's third largest city located to the east of Tripoli. "We feel so, so, isolated here. We are pleading with the international community to help us in this very difficult time."

The doctor said naval ships in the Mediterranean port were blocking aid. Another resident said that in many parts of town, the water network was cut, and trucks that traditionally supply rooftop tanks weren't able to enter the city. Townspeople were relying on poor quality home-dug wells normally used to irrigate gardens, he said.

The assault on Ajdabiya began in the morning with a heavy bombardment from warplanes and ships off shore and what rebels said were constant volleys of long-range Grad rockets. Opposition fighters had heavily fortified the western entrance to the city, expecting an attack from that direction, but when it came, they were surprised to find they had been flanked, with Gadhafi forces striking the southern entrance at the same time.

Mosques in the city blared calls from their minarets for residents to join the defense. Hundreds rushed in, but there weren't enough weapons for all of them. "They don't have the arms, but they have the will to fight," said Lt. Col. Mohammed Saber, an army officer who defected to the uprising and spoke from the front.

At one point, two antiquated warplanes held by the rebels bombed warships off shore to try to stop their bombardment, Saber and another opposition activist said. The activist, who asked not to be named, said rebels procured a handful of "very old" warplanes weeks ago but did not want to use them, believing that Western powers, with Arab diplomatic support, would impose a no-fly zone over Libya.

Now, he said, the opposition would use the planes to bomb "oil wells and oil sites."

Throughout the day, rockets and shelling rained down on residential neighborhoods, several rebels said. Before nightfall, tanks and armored personnel carriers punched into the city from the west and south, facing hit and run attacks by rebel fighters using assault rifles and anti-aircraft guns.

"Everybody is defending himself. I am a resident of this city. I am not going anywhere," one fighter told AP. "We have been prisoners of war for 40 years. ... We are civilians -- we didn't know how to fight before this war. We are learning how to fight now. Sooner or later we will kick out this madman."

Libyan state television claimed the battle was already won. The report said Gadhafi's troops were "completely in control of Ajdabiya and are cleansing it from armed gangs."

Ajdabiya has been a key supply point for the rebellion, with ammunition and weapons depots. Until now, the Gadhafi forces' offensive toward the east has battled over two oil ports on the Mediterranean Sea, and Ajdabiya is the first heavily populated city in the area they have tried to retake.

Its fall would set the stage for a regime march on Benghazi. It is a rebel bastion, but with opposition forces in disarray after Ajdabiya, it is unclear how strong the city's defenses would be.

A Tuareg lieutenant from Mali who has fought for the Libyan government since 1993 said the government wants to retake Benghazi, but doesn't want to attack the city itself. He says the government will try to convince residents to force militants out into the open desert.

"The idea is to surround Benghazi but to leave one exit open for the rebels," he said, speaking on condition of anonymity to avoid reprisal.

Hadid reported from Cairo. Hadeel al-Shalchi in Tripoli and Martin Vogl in Bamako, Mali contributed to this report.