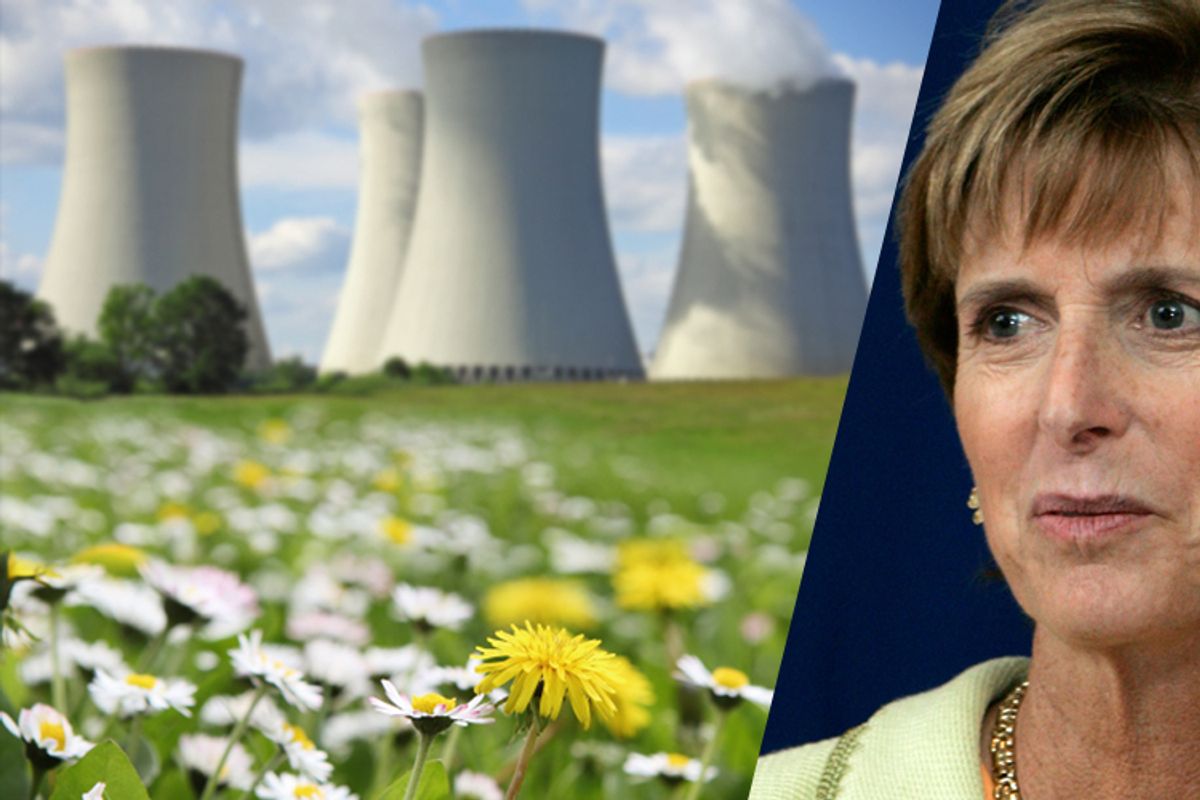 I've been closely tracking the spin-laden response of the nuclear power industry to the crisis in Japan over the past couple of days. But it's also worth taking a moment to look back at what the messaging of the industry has been in recent years and why the current situation is so damaging from a public-relations perspective.

There have been two major prongs in the (up-till-now successful) argument for a renewal of nuclear power in the United States, where a new reactor has not been built in the past 30 years: first, that nuclear power plants do not release carbon emissions that cause climate change; and second, that nuclear power generation is completely safe.

It's the latter concept that is currently taking a battering, with authorities in Japan -- where 200,000 people have already been evacuated, three explosions have occurred, and dozens of workers have been exposed to radiation -- laboring to prevent full meltdowns at multiple reactors.

The dual message of the industry is neatly encapsulated in the name of a prominent pro-nuclear group, the Clean and Safe Energy Coalition (CASEnergy Coalition for short). Chaired by former EPA administrator Christine Todd Whitman and Greenpeace founder-turned-nuclear evangelist Patrick Moore, the group launched in 2006 with an event at which Whitman bemoaned the fact that people "still think in terms of Bhopal and Chernobyl." In a typical Op-Ed she wrote for the group last year, Whitman used the word "safety" five times in one paragraph:

The concern for safety is critical, but the good news is that preventive safety work is already being done every day at our nation’s reactors. In fact, the United States nuclear energy industry has accumulated an outstanding safety record since the days of the Three Mile Island accident in 1979. Worker safety in nuclear plants stands above any other American industrial sector, as measured by lost-time accidents. The nuclear power industry has devoted significant resources to continuously improving the safety and reliability of our nuclear power facilities against all manner of potential risks and threats with the result that, for more than 30 years, nuclear plants have delivered about 20 percent of America’s electrical power safely and securely, without major incident.

The industry has been nothing if not consistent in its messaging. Moore, the co-chair of CASEnergy, in 2009 asserted, "Nuclear is one of the safest industries that's ever been invented by human beings."

And President Obama, the most powerful nuclear advocate in the country, has repeatedly talked about new "safe and effective" nuclear power plants. As Mother Jones points out, Obama has also cited Japan as a model when it comes to nuclear power.

Obama at this point is sticking to his support for nuclear power. It seems likely that the severity of developments in Japan will go a long way to determining the future credibility of the industry's "safety" message.