Kurt and Blaine finally kiss on "Glee" -- but so what? 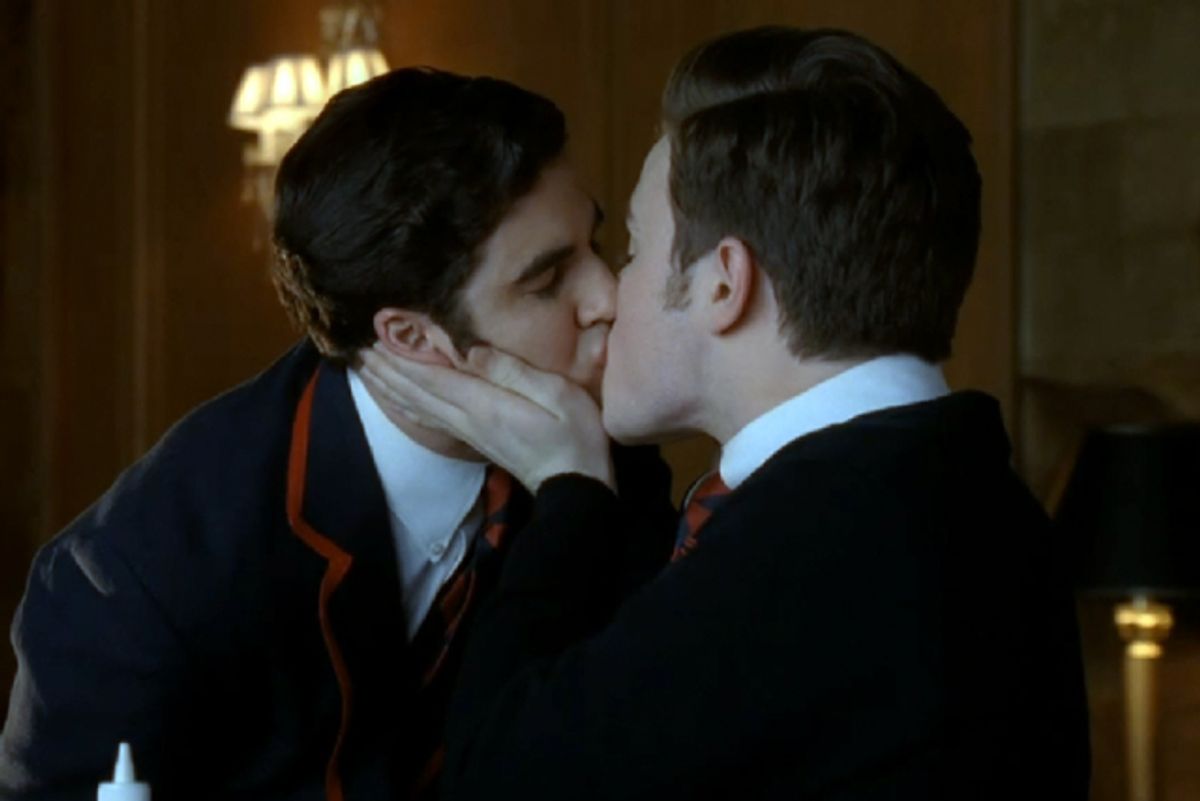 After a long buildup, Kurt (Chris Colfer) finally got his first consensual gay kiss on "Glee" last night, and it was ... well, touching, I suppose, mainly because of the performances by Colfer and his screen partner, Darren Criss, who plays the prep school dreamboat Blaine. But it should have been more than that; it should have been a glorious release of pent-up narrative energy, a stunner. It played like an afterthought, as if the writers and producers of the series looked at the ongoing episode lineup and realized, "Oh, right -- we're nearing the end of the season and we're supposed to have these characters smooch at some point; might as well do it here."

The moment was nicely written and performed, and the tone -- excited, vulnerable and awkward -- was just about right. I was happy for Kurt and for fans of the show. This poor kid has endured a lot, including mockery and hazing at school and his father's heart attack. He seemed both elated and tortured by his connection with Blaine, a sweet but still psychologically unformed young man who embarrassed himself by surprise-serenading a crush object at the Gap, and who enjoyed a drunken snog with Kurt's best friend Rachel (Lea Michele).

But the timing and context of the kiss pointed out one of the show's many glaring weaknesses: its inability to create subplots logically and tend them carefully, so that they build in a sensible way and really pay off. This whole Kurt-goes-to-prep-school business has felt like an unnecessary detour. Kurt had to transfer to escape being bullied by the closeted football jock Dave Karofky (Max Adler), who impulsively kissed Kurt in an episode last November. (I never quite believed that there was nothing that the teachers or administrators of William McKinley High School could have done to punish or even constrain Karofsky, whose behavior fit the classic legal definition of intimidation, stalking and sexual harassment -- but that's a whole other rant.) Then for a long time "Glee" just seemed to leave Kurt twisting elegantly in the wind, barely giving him any solos (even private ones not directly related to his new school) and failing to develop any new relationships except the one with Blaine.

This all meant that when the Kurt-Blaine kiss finally arrived, it felt anticlimactic. I loved the moment early in the episode where Blaine realized he loved Kurt: The glee club  gathered to observe the death of their parrot mascot, Pavarotti (whose demise was hyped in promos, rather prankishly, as a "death at regionals!"), and Kurt performed a contemplative cover of the Beatles' "Blackbird." (Unlike many "Glee" actors, Colfer doesn't just belt when he sings; he performs.) The slow dolly into Blaine's enraptured face was lovely. But am I the only cynic who felt that the series was rushing through a pivotal event that it should have developed with more care? I'll withhold final judgment on the Kurt-Blaine relationship until I see where they take it between now and the finale. But I can't imagine it'll go anywhere that justifies having created it to begin with. I would have preferred to see Kurt arrive at this stage in his personal development at McKinley, in the company of his close friends and fellow performers, rather than splitting him off from the main narrative. At a high school as apparently large as McKinley, is it really possible that Kurt's only prospect as a gay lover or even a gay friend is the self-loathing thug Karofsky? Sigh, groan, eye roll.

The rest of the episode was mostly OK -- energetic and likable but disorganized and forever teetering on the brink of awful, like so many "Glee" episodes. The decision to have New Directions write and perform original songs seemed as much of an afterthought as the Kurt-Blaine kiss (on the "Glee" writers' parts as well as music teacher Will Schuester's). The glee club director decides to risk the kids' chances on a radical gambit without first ascertaining whether any of them can really write? Really? And he "helps" them by handing out rhyming dictionaries? Seriously, "Glee"? The songs themselves were, of course, commissioned by the series' producers and written by professionals (to sell iTunes downloads, natch), but none of them were as interesting in performance as a well-known but mediocre arena-rock or hip-hop song might have been.

Singing is ultimately an interpretive art whether the material is preexisting or original, so it's worth asking if "Glee" even should have gone down this road, especially when it yields energetic but forgettable numbers such as Puck's "Big Ass Heart" and Mercedes' "Hell to the No." I didn't believe that New Directions could have won a trophy with the weak original material they performed at regionals. And the backstage deliberation between the judges -- a trio including local news anchor Rod Remington (Bill A. Jones), an uptight and homophobic Tea Party candidate (Kathy Griffin) and a stripper-turned-nun (Loretta Devine) -- was the worst kind of sub-David E. Kelley, conservative-baiting garbage.

And yet here I am writing about the series again! Despite occasional moments of  brilliance, "Glee" is the worst show I can't stop watching. It's like that "Annie Hall" joke about the two elderly women in the Catskills resort. One says, "Boy, the food at this place is really terrible." And the other one says, "Yes -- and such small portions."