If the faux-memoirist thinks he'll offend anyone by depicting Christ as a whoring drunk, he'll be disappointed 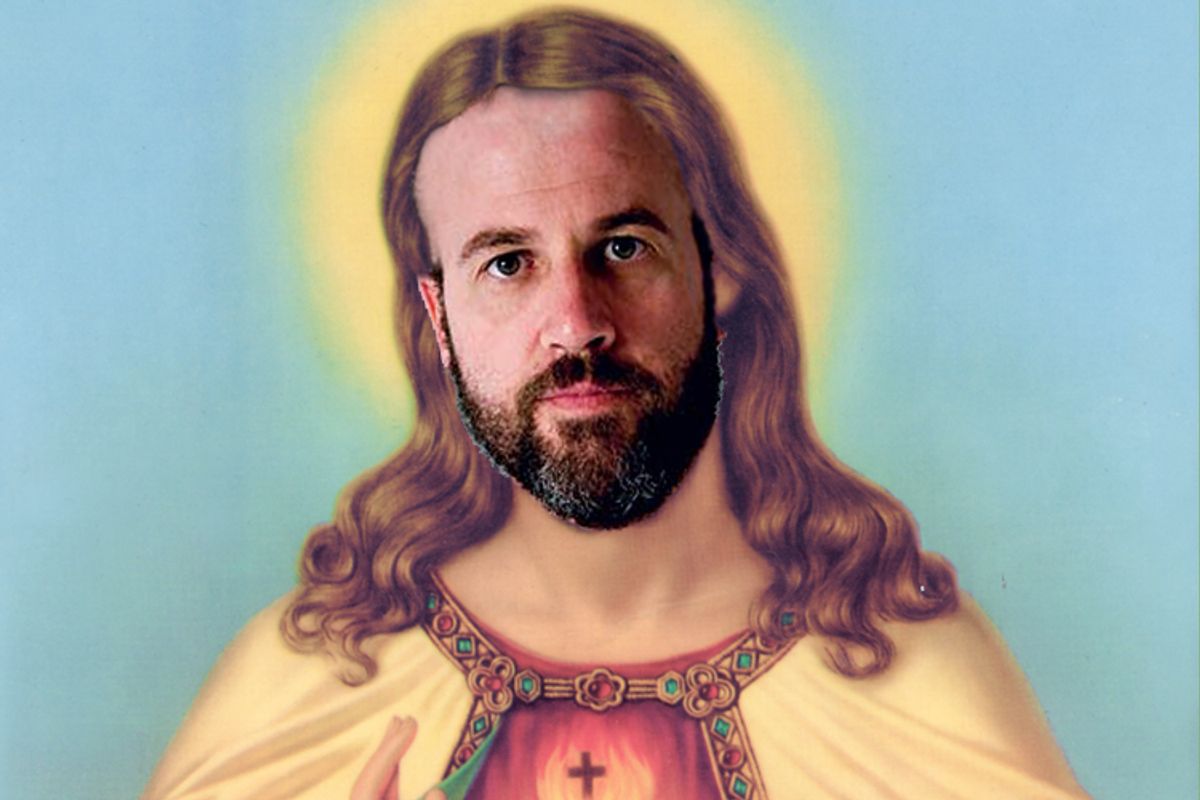 Apparently James Frey has a tiny man in his head, like some kind of internalized boss, who barks, "You haven't enraged anyone lately!" and starts cracking the whip whenever things slow down. This week, we learned that Frey will deliver a book he discussed in an interview with the Rumpus back in 2008, "The Final Testament of the Holy Bible," which will depict the return of Jesus Christ as a drunk who consorts with hookers and canoodles with other men. The book will be published in a limited edition by an art gallery and self-published by Frey "online," which presumably means in e-book format. This event will take place on April 22, Good Friday.

I know! Shocking, right? Frey says that he expects to "get blasted" for this. The press has happily joined him in rubbing its hands together over the prospect, deploying words like "controversial" and "firestorm" in stories that Frey promptly posts to his website. "I tried to write a radical book. I'm releasing it in a radical way," Frey told the New York Post. So it's possible his Christ might be a skateboarder, too.

But seriously, who besides good ol' Bill Donohue at the Catholic League can possibly be counted on to take offense at such a stunt? "I'm sure the religious right will go crazy," Frey said. Well, at least someone is sure. But since Philip Pullman barely raised a snort from them with "The Good Man Jesus and the Scoundrel Christ" last year -- and that was a famous atheist's revisionist account of the historical Jesus, not just a fancifully smutty imagining of his second coming -- I would not advise the author to hold his breath.

In fact, there's already a long history of revisionist literary accounts of Jesus' life and social criticism disguised as fiction depicting his return. Among the most renowned in the first category are "The Last Temptation of Christ" by Nikos Kazantzakis (1951), "Quarantine" by Jim Crace (1997) and "The Gospel According to the Son" by Norman Mailer (1999), as well as the comic romp "Lamb: The Gospel According to Biff, Christ's Childhood Pal" by Christopher Moore (2001) and about a zillion New-Agey retellings that turn Mary Magdalene into the heroine.

The observation that the Jesus of the Scriptures would be dismayed at what his professed followers get up to today is also by no means rare. In 2008, Roland Merullo published "American Savior," in which a pro-choice Jesus runs for president, and in 1990, James Morrow's "Only Begotten Daughter" has the Messiah reincarnated as a woman. Science fiction writers have been particularly fond of using the trope to illuminate the hypocrisies and injustices of our time, as Frey presumably intends to do. Theodore Sturgeon's last novel, "Godbody," features a savior who communicates divine love by touch and who predictably winds up slaughtered by a mob. And surely the best-known crypto-Christ in all science fiction is Valentine Michael Smith of Robert A. Heinlein's "Stranger in a Strange Land," a human instilled with the hippieish values of Mars, who meets an equally ugly end.

The most celebrated literary second coming of all, however, is the "Grand Inquisitor" section from Dostoyevsky's "The Brothers Karamazov," in which Christ returns to Medieval Spain and is sentenced to be burned at the stake by the Inquisition. The Grand Inquisitor visits him in his cell on the eve of the execution and delivers a long explication of how the Church has moved beyond his teachings after realizing that the vast majority of human beings cannot cope with and do not really want freedom. It's a profound meditation on courage and free will. That's a tough act to follow, Mr. Frey, no matter how radical you're prepared to get.

But controversial? Not really. Kazantzakis' novel did provoke some genuine furor when it was first released 60 years ago, and the book has a history of being banned. Nowadays, however, you can't expect mere print to get you properly blasted. You need pictures. Protesters picketed theaters screening Martin Scorsese's film adaptation of "The Last Temptation of Christ" in 1988, and are believed to have seriously damaged its earnings. The following year, conservatives used Andres Serrano's photograph "Piss Christ" as an argument to defund the National Endowment for the Arts, which gave him $15,000 for the work. A decade later, New York City Mayor Rudolf Giuliani tried to evict the Brooklyn Museum for exhibiting a purportedly blasphemous painting.

So no wonder Frey has hooked up with the art world for this particular scheme. It's like going to Blackwater for bodyguards; making the holy rollers mad is just what they do. Still, the project itself seems a miscalculation. So far, Frey's notoriety has been founded on two pillars: producing a memoir that turned out to be partially fabricated and running a sort of book factory in which recent MFA graduates are gulled into laboring like sweatshop seamstresses for meager pay. Before that, he attracted attention by bad-mouthing more famous writers.

The genius of this strategy is that it focuses on offending that tiny class of Americans who still care about books and can be expected to notice the people who write them. Who else would wax indignant on the porous boundary between fiction and nonfiction and/or the exploitation of aspiring novelists? And that's certainly not the same crowd who rants about the War on Christmas or tries to put prayer back in schools. In fact, it's not clear that that crowd ever reads anything -- including the Bible. Even Pullman, who was piping atheist propaganda directly into our school libraries for a nearly a decade, didn't get called on it until they made his book into a movie.

Could it be that Frey, for all this talk about getting blasted, is now courting the very people he once specialized in outraging? You can become a minor hero to the liberal intelligentsia if your work gets you persecuted by bullies like Bill O'Reilly. Of course, that would involve Frey making himself over as a victim, when the world he inhabits seems much happier to cast him as the villain. A role-change like that isn't going to be easy. As a matter of fact, it's going to take a miracle.

Salon on the fabrications discovered in James Frey's memoir, "A Million Little Pieces," in 2006