James Madison would be horrified by Peter King

The founder's experiences with Tripoli taught him what the congressman misses: Islam doesn't cause terrorism 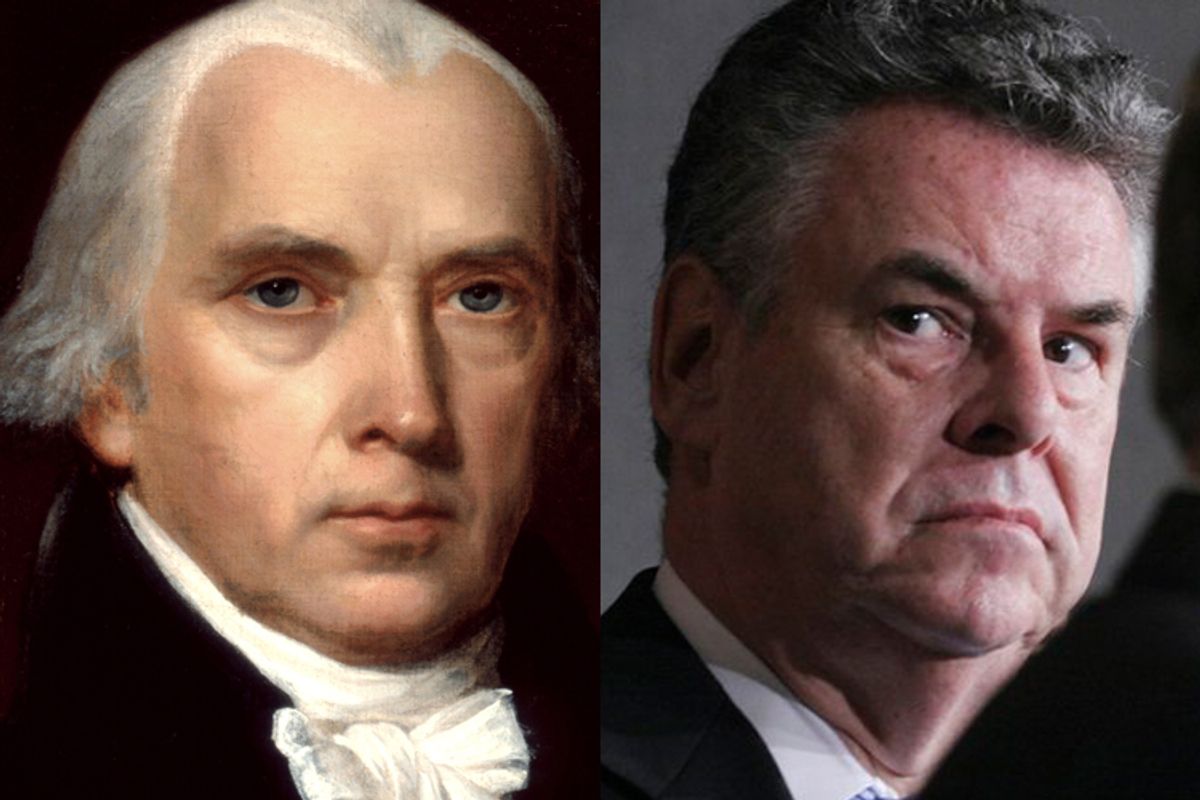 Today -- Wednesday, March 16 -- James Madison is 260 years old. Despite the natural abundance and rich panorama that surrounds the grave site on his estate of Montpelier, he rests uncomfortably. Like his central Virginia neighbor and political alter-ego Thomas Jefferson, he felt that his greatest achievement lay in the realm of freedom of conscience. Religious pluralism was the centerpiece of their combined vision for America. Of course, these same two men, tolerant of religious difference, waged war with Muslims -- but not with Islam.

There is a dual lesson in recalling what Madison and Jefferson did in embracing freedom of religion while sending warships to silence pirates and bullies on the shores of Tripoli. Their prescience may surprise you.

Echoes of "what the founders believed" reverberate all the time, especially coming from the lips of those with axes to grind who are seeking scriptural support from the Constitution. Take the chairman of the House Homeland Security Committee, Long Island congressman Peter King, who opened his remarks last week on the threat posed by radical Islam by charging "special interest groups" with having caused "hysteria" in anticipation of the extended hearings he is now orchestrating. Actually, he has it backward. Hysteria is what he is feeding.

Congressman King overlooks what is the very essence of James Madison’s thinking: religious discrimination as the most dangerous threat to liberty. "Whilst we assert for ourselves a freedom to embrace, to profess, and to observe a religion which we believe to be of divine origin," he wrote in his bold "Memorial and Remonstrance" of 1784, "we cannot deny an equal freedom to those whose minds have not yet yielded to the evidence which has convinced us." Madison and Jefferson first met in the fall of 1776, three months after the Declaration of Independence, as fellow members of the Committee on Religion in the Virginia State Assembly. Freedom of conscience, then under consideration in Williamsburg, was the subject on which they first saw eye to eye; the two young legislators were impelled toward collaboration in order to change the laws and disestablish the Anglican Church. Their liberal advocacy opened the way for Baptists, Methodists, Quakers and others to extend their reach.

In his 1785 Notes on Virginia, Jefferson wrote: "It does me no injury for my neighbor to say there are twenty gods or no God. It neither picks my pocket nor breaks my leg." For making this dangerous statement, he was painted in broad strokes by self-righteous conservatives in 1800, as the confirmed atheist who, if elected president, would burn all Bibles. Their idea was: You’re not "one of us" if you question the right of Christian ministers to enforce a moral consensus -- that which sustains the illusion that the community can be kept safe by espousing the same or similar views. Fearful people look for comfort in the predictable, in simple formulations. That's where enemies come in handy.

The same impulse led to the Japanese internment and drove Cold Warriors to see corrosive communism in families and in schools and in Hollywood. In some circles today, the term "social justice" has acquired a bad name, as an unsafe redistribution of wealth that could trickle down to foreign illegals. If it is possible to conceive that "social justice" is a threat, then American Muslims are easy pickings -- just look for the prayer rugs.

To Madison, attacking a person’s religion was the first step in disempowering and demonizing a minority. This slow dehumanization was an effective political tool for enhancing the political clout of the loudest faction in society. We can see shades of the same phenomenon in the crass calls of birthers and their Republican enablers who refuse to dismiss the nonsense about our illegitimate "Muslim" president.

Find an enemy, preying and bestial, to hate. An enemy, readily identifiable, will help alleviate our national anxieties. Only it won't. Peter King justifies the ongoing hearings by saying that "to back down would be a surrender to political correctness." No sane person would dispute the need for our government agencies to continue to exercise extreme vigilance and aggressively act to stop all security threats. But like those who saw religious pluralism as a threat to security in 1800, King is mixing a distaste for what strikes him as un-American with old-fashioned fear-mongering.

Minnesota Democrat Keith Ellison, a member of the committee and a Catholic who converted to Islam at age 19, takes issue with the Republican congressman. "You investigate the Mafia," he struck back, employing an easy analogy, "not Italians." He was speaking on "Real Time With Bill Maher" after the first day of the hearings, contradicting Rep. King by suggesting that all of the committee’s stagecraft might actually "cause the thing it’s trying to prevent" -- more radicalism.

Madison knew something about Islam. As Jefferson’s secretary of state, he oversaw the Tripolitan War from 1801 to 1805. (Yes, our republic’s first significant foreign war took its name from the very city where Col. Moammar Gadhafi presently tests the world’s patience.) For years, the Barbary States of North Africa -- Algiers, Tunis, Morocco and Tripoli -- had been attacking vessels in the Mediterranean, capturing crews and holding them hostage until a ransom was paid. When the U.S. balked at paying tribute, the pasha (chief) of Tripoli declared war. Neither Madison nor Jefferson shied from using force to teach the tyrants a lesson, illustrating the young nation’s pride.

Just as significantly, though, the Jefferson administration was careful not to turn the conflict into a holy war. Madison instructed the U.S. consul in Algiers to exhibit "universal toleration in matters of religion." When Pope Pius VI learned of America’s naval triumph on the shores of Tripoli, he praised the administration for its defense of Christianity. Madison and Jefferson flatly rejected the pope’s perspective, even though the literature on Islamic culture published in the U.S. in the first few years of the 19th century insisted that the religion of the Barbary States made its people "superstitious and cruel." Madison and Jefferson appreciated that their war was about the use of power in the national interest, and nothing else. They were pragmatic politicians, not zealots.

Madison had witnessed the persecution of religious minorities in Virginia, where the Anglican Church used tax dollars and corporate land grants to extend its power and silence dissenters by holding over their heads the threat of prosecution for heresy. And so he committed himself to the protection of minorities. In the famous Federalist No. 10, drafted in support of the Constitution, he contended that the most dangerous political factions were those inspired by religious and political fanaticism and aggravated by demagogic orators. In recent performances, the pugnacious Peter King seems the perfect embodiment of Madison’s worst-case scenario.

Rep. King led the charge against the so-called ground zero mosque, a proposed community center with a prayer room (not quite a mosque). Invoking the concern that any Islamic site would tarnish the memory of those who died on 9/11 worked on the patriotic imagination and effectively captivated the media for weeks. More recently, King stated in a Fox News interview (with no facts to back up his fear-mongering) that 85 percent of Muslim religious leaders in the United States were influenced by radical Islamic and terrorist beliefs.

He is not moved by the fact that at least 29 Muslims died at ground zero, a fact Rep. Ellison made clear as a member of the Homeland Security Committee. His account of Mohammed Salman Hamdani, a Muslim American casualty on 9/11, showed how the culture of fear led some to "smear" his name. The real Hamdani was an "all-American kid," a member of his high school football team, a police cadet and paramedic. His identity was erased as rumors were spread, and a heroic young man was transformed into a terrorist simply to support a convenient narrative in which an adherent of a religion is automatically defined as violent.

During the War of 1812, when the enemy ultimately set fire to the Capitol, the president’s house and other government buildings, Madison would not sacrifice his principles. Though Secretary of State James Monroe urged him to curb freedom of speech and enforce sedition prosecutions (there was considerable pro-British sentiment), he would not do so. Also, as president, he refused to charter an Episcopal church in Alexandria, Va., because, he said, the national government should take no "cognizance" of religion. In a Madisonian world, any memorial at ground zero should take no cognizance of religion — by the same token, you do not mask religious discrimination behind the rhetoric that a Muslim center in the same neighborhood would insult the dead.

Granted, it is not always easy to maintain Madisonian principles. Political animals are not known for abiding by rational solutions. But if we apply a Madisonian perspective to the hearings, we can see clearly that they are skewed to underscore King’s most prominent fears. He has intentionally excluded many of the security experts in this country from testifying, when they might put a damper on the singular focus on American Muslims.

Here is another little-known fact about James Madison: He made sure that the Constitution forbade all religious tests for holding office. "Merit alone," he said, was to be the basis for officeholding -- not one’s religious background. It was, you might say, an article of faith for him. Although his was a time of remarkable prejudices as much as it was a period of growing national pride, when the enslavement of Africans could still be rationalized by his friends and neighbors, Madison would exclude no religious group -- not even Muslims -- from a place in government.

Bottom line: The oft-quoted "Father of the Constitution" was fully convinced that religious hatred excites the worst, most irrational passions; and when majorities target minorities for abuse, they behave as a soulless mob. Madison argued, time and again, that "enflamed" majorities caused decent individuals to go against their own consciences, disregarding their best principles while sheepishly following the crowd.

Haven’t we figured it out yet? It is not religion that makes a terrorist; it is belief in a radical ideology condoning violence, a perverted ideology promoting the killing of civilians, and even blowing up oneself, in the name of a cause. We will be safer when, as a people, we tackle each form of terrorism as the sociopathic problem it is.

Demagogic displays, the exploitation of the vulnerabilities of minorities, gives only a false sense of security. Madison made this clear to his fellow Americans in 1784, when he declared that any official of the government who made himself a judge, or interpreter, of another’s religious life not only revealed "an arrogant pretension," but was at the same time contradicting the teachings of Christianity, which "disavows a dependence on the powers of this world." And as much as Madison insisted that government had no business making laws to constrain religious practice, he was just as insistent that religion’s intrusion into government affairs invited greater tyranny. What had religious establishment contributed to civilization? he posed. "Superstition, bigotry, and persecution."

To celebrate his birthday properly, James Madison’s cogent observations ought to remind us to uphold our founding ideals even when indiscreet politicians and pundits with microphones are leading us astray.

Andrew Burstein and Nancy Isenberg are professors of history at Louisiana State University, and co-authors of "Madison and Jefferson."