Hope and loss in Japan's search for 8,000 missing

In Japan, the search for loved ones stretches on days after earthquake 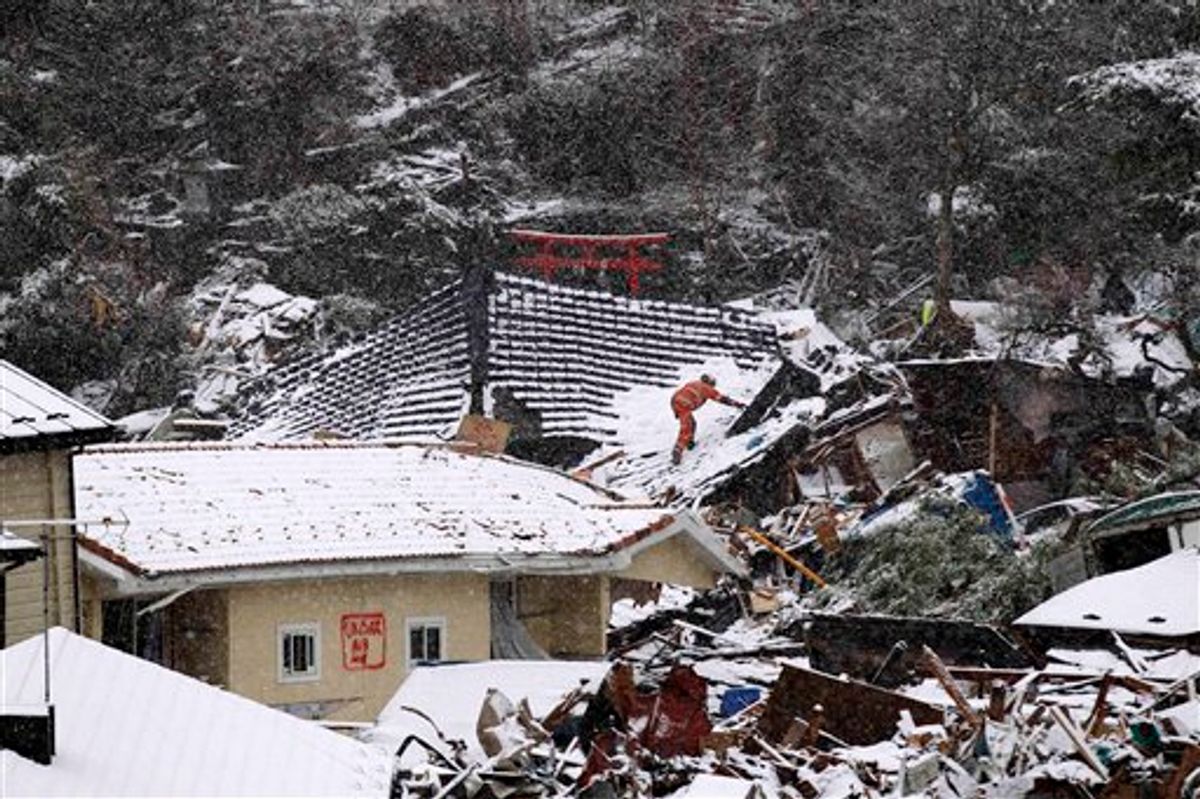 A member of a British search and rescue team climbs on the roof of a building damaged by the tsunami, whilst searching for trapped people as snow falls in Kamaishi, Japan, Wednesday, March 16, 2011. Two search and rescue teams from the U.S. and a team from the U.K. with combined numbers of around 220 personnel searched the town for survivors Wednesday to help in the aftermath of the earthquake and tsunami. (AP Photo/Matt Dunham) (AP)
--

Line after line, a list on the wall of city hall reveals the dead. Some are named. Others are identified only by a short description.

One set catches the eye of Hideki Kano, a man who appears to be in his 30s.

"I think that's my mom!" he says. He rushes out into the snow, headed for a makeshift morgue.

The list in Natori, and others along Japan's northeast coast, will only get longer.

Five days after the 9.0-magnitude earthquake and tsunami, the official death toll is more than 4,300. More than 8,000 people are still missing, and hundreds of national and international rescue teams are looking for them.

In the industrial town of Kamaishi, 70 British firefighters in bright orange uniforms clamber over piles of upturned cars to search a narrow row of pulverized homes. They wear personal radiation detectors amid fears of leaks from damaged nuclear plants far to the south.

One woman's body is found wedged beneath a refrigerator in a two-story home pushed onto its side.

"Today and tomorrow there is still hope that we will find survivors," says Pete Stevenson, head of the British rescue crews. "We'll just keep on carrying out the searches."

Those seeking loved ones have posted hopeful notes in temporary shelters and other public places. They cover the front windows of Natori City Hall, blocking the view inside:

"Kento Shibayama is in the health center in front of the public gym."

"To Miyuki Nakayama: Everyone in your family is OK! We can't use our mobile phones, so you can't call us, but we're all here. If you can come home, please come! We're praying for you."

City officials have posted a list of 5,000 people staying at shelters. Yu Sato, 28, snapped photos of the names.

"I'll post them on the Internet so people living far away can check," he says.

In Otsuchi town, Reiko Miura conducts her own search.

She's looking for a 50-year-old nephew who couldn't flee the tsunami because of a work injury that had phyiscally disabled him. His mother -- Miura's sister -- asked her to look for her son.

But for the 68-year-old woman, it is a struggle just to recognize the neighborhood, now a sea of mud punctuated by tossed cars and mounds of debris.

"I'm pretty sure that my family home is here. It was a big house," she says upon reaching a pile of rubble in a location that feels familiar. But there's no sign of her nephew, and she trudges back across the mud, unsure what to tell her sister.

The devastation is of such magnitude that it is hard to imagine some of the communities ever being rebuilt. Town after town has been wiped away.

Each curve in the road opens onto a new scene of destruction -- a van balanced precariously on the railing of a Buddhist temple, a handbag inside an overturned washing machine.

Kesen is virtually a ghost town.

Miyuki Kanno, who lives a few miles (kilometers) away, rode his bicycle down a mud- and water-choked section of road looking for information about missing relatives. He guessed it would take 20 years for Kesen to come back.

Farther north in Ofunato, 72-year-old Keiichi Nagai is less sure.

He points at a washed-up fishing boat that he said destroyed his house. All he managed to salvage was a small brown wallet with a hospital card.

"There's nothing left of this place," he says. "The population is going to be half what it was. It's scary to live here now. People will think it's dangerous. There's a chance another tsunami will come. I won't live here. Maybe on the hill but not here."

Some 430,000 people are in temporary shelters, too worried about daily survival to think of the future.

Some 350 in the gym and theater of an Ofunato middle school have fashioned beds from cardboard mats and blankets. Elderly residents huddle around gas heaters, and youths kick a soccer ball on a snow-laced baseball field.

Japanese military officers stock vats of water in a parking lot and ferry in bananas, rice balls and miso paste.

In Kesennuma, another coastal city, Kayoko Watabe arrives at a shelter after trudging through mud and thick snow. The 58-year-old woman is wearing the same clothes she had on when the tsunami struck.

She is staying with relatives who lack electricity, heat and water, and she's come to the shelter -- a junior high school -- to get food and other necessities. There, she finds survivors living in classrooms. Most lie on the floor, wrapped in blankets. The stench of unflushed urinals fills the hallway.

"We've never seen or experienced suffering like this," she says. "All I can think about is where to get food and stay warm."