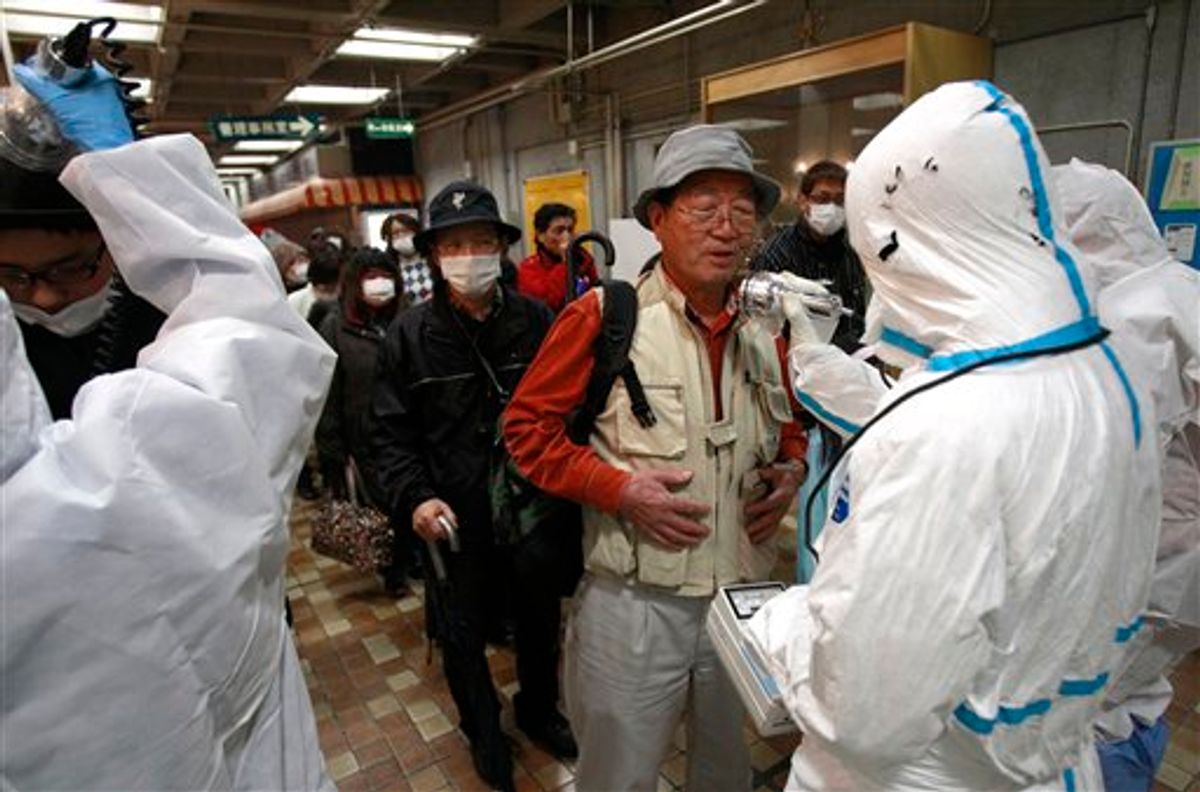 An evacuee is screened for radiation exposure at a testing center Tuesday, March 15, 2011, in Koriyama city, Fukushima prefecture, Japan, after a nuclear power plant on the coast of the prefecture was damaged by Friday's earthquake. (AP Photo/Wally Santana) (AP)
--

Japan suspended operations to prevent a stricken nuclear plant from melting down Wednesday after a surge in radiation made it too dangerous for workers to remain at the facility.

Chief Cabinet Secretary Yukio Edano said work on dousing reactors with water was disrupted by the need to withdraw.

The level of radiation at the plant surged to 1,000 millisieverts early Wednesday before coming down to 800-600 millisieverts. Still, that was far more than the average

"So the workers cannot carry out even minimal work at the plant now," Edano said. "Because of the radiation risk, we are on standby."

Experts say exposure of around 1,000 millisieverts is enough to cause radiation sickness.

Earlier officials said 70 percent of fuel rods at one of the six reactors at the plant were significantly damaged in the aftermath of Friday's calamitous earthquake and tsunami.

News reports said 33 percent of fuel rods were also damaged at another reactor. Officials had said they would use helicopters and fire trucks to spray water in a desperate effort to prevent further radiation leaks and to cool down the reactors.

Authorities have tried frantically since the earthquake and tsunami to avert an environmental catastrophe at the Fukushima Dai-ichi complex in northeastern Japan, 170 miles (270 kilometers) north Tokyo.

The government has ordered some 140,000 people in the vicinity to stay indoors. A little radiation was also detected in Tokyo, 150 miles (240 kilometers) to the south and triggered panic buying of food and water.

There are six reactors at the plant, and three that were operating at the time have been rocked by explosions. The one still on fire was offline at the time of the magnitude 9.0 quake, Japan's most powerful on record.

The Nuclear and Industrial Safety Agency estimated that 70 percent of the rods have been damaged at the No. 1 reactor.

Japan's national news agency, Kyodo, said that 33 percent of the fuel rods at the No. 2 reactor were damaged and that the cores of both reactors were believed to have partially melted.

"We don't know the nature of the damage," said Minoru Ohgoda, spokesman for the country's nuclear safety agency. "It could be either melting, or there might be some holes in them."

Meanwhile, the outer housing of the containment vessel at the No. 4 unit erupted in flames early Wednesday, said Hajimi Motujuku, a spokesman for the plant's operator, Tokyo Electric Power Co.

Japan's nuclear safety agency said fire and smoke could no longer be seen at Unit 4, but that it was unable to confirm that the blaze had been put out.

Yuasa reported from Tokyo. Associated Press writers Elaine Kurtenbach in Tokyo and David Stringer in Ofunato contributed to this report.