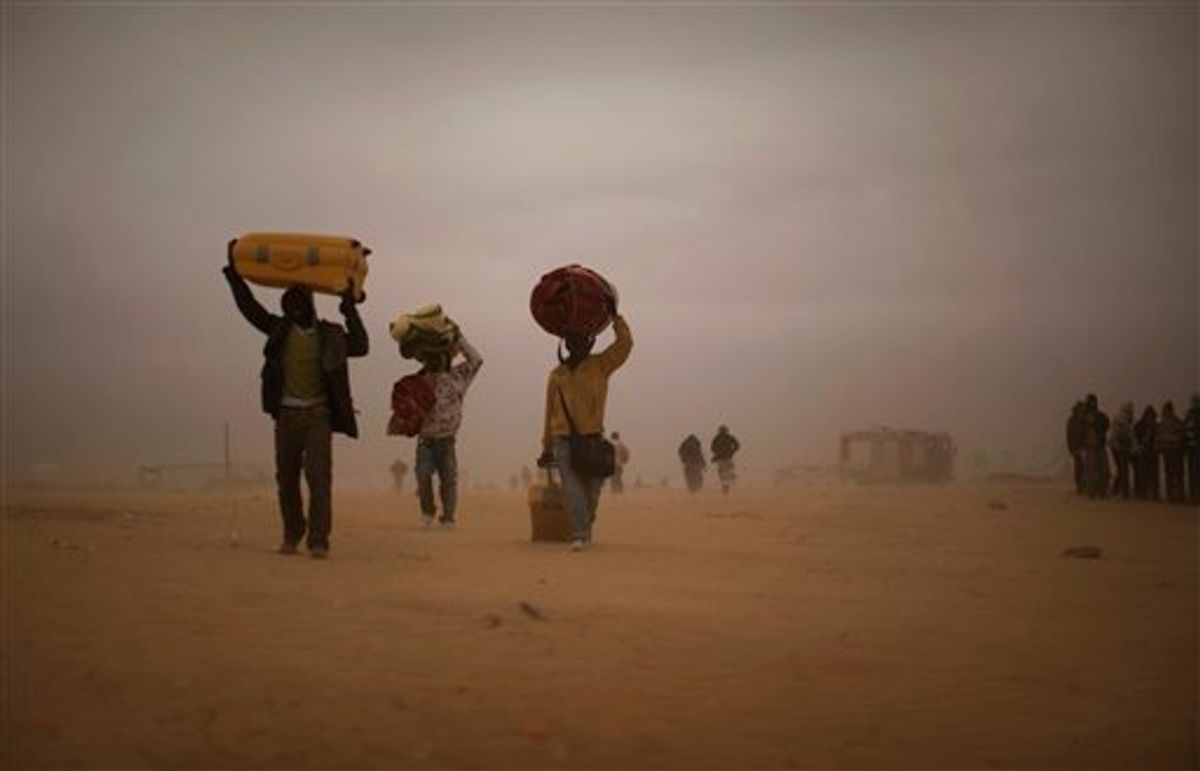 Men, who used to work in Libya and fled the unrest in the country, carry their belongings as they walk during a sand storm in a refugee camp at the Tunisia-Libyan border, in Ras Ajdir, Tunisia, Tuesday, March 15, 2011. More than 250,000 migrant workers have left Libya for neighboring countries, primarily Tunisia and Egypt, in the past three weeks. (AP Photo/Emilio Morenatti) (Associated Press)
--

Moammar Gadhafi's forces closed in on Libyan rebels in the east and shelled holdouts in the last western opposition stronghold Wednesday as the rebels voiced anger and frustration at the West for not coming to their aid.

Charred vehicles and bullet-riddled pickup trucks were piled on the side of the road leading from the strategic eastern cities of Brega to Ajdabiya and an Associated Press Television News cameraman counted at least three bodies, evidence of fierce fighting as the Libyan leader intensified his efforts to retake control of the country he has ruled with an iron fist for more than four decades.

The rebels lashed out at the West as the latest international effort to impose a no-fly zone over Libya faltered. Supporters in the U.N. Security Council were trying to push through a resolution to impose such a move along with other measures aimed at preventing Gadhafi from bombing his people, but Russia and Germany have expressed doubts.

"People are fed up. They are waiting impatiently for an international move," said Saadoun al-Misrati, a rebel spokesman in the city of Misrata, the last rebel-held city in the west, which came under heavy shelling Wednesday.

"What Gadhafi is doing, he is exploiting delays by international community. People are very angry that no action is being taken against Gadhafi's weaponry."

Pro-Gadhafi forces had largely gained control of Ajdabiya after two days of relentless shelling, but they acknowledged they still faced pockets of resistance in the city of 140,000 people.

Habib al-Obeidi, a doctor at Jalaa Hospital in Benghazi, said that a colleague in Ajdabiya had told him 25 people were killed when pro-Gadhafi forces opened fire on civilian cars fleeing the city. That report could not be independently confirmed.

The breakdown in rebel defenses in Ajdabiya threatened to open the gateway to the long stretch of eastern Libya that has been in the control of the opposition, including Benghazi, Libya's second-largest city and and the de facto capital of the opposition.

The AP and other journalists were taken by the government from Brega to the western edge of Ajdabiya, but the convoy was then turned away because the commander said there were still pockets of resistance.

More than a dozen tanks were stationed at the arches marking the entrance to the city and a large green flag had been used to cover up the pre-Gadhafi banner that has been adopted by the rebels. Anti-Gadhafi graffiti also had been painted over.

Some buildings had bullet holes, and a bloodstained green army jacket was left on the ground along with discarded ammunition boxes.

The rebels also claimed a small victory, hijacking a Libyan tanker ship that was transporting fuel from Greece to Gadhafi's regime. Opposition spokesman Mustafa Gheriani said fighters seized the ship on Tuesday off the Mediterranean coast and that it was carrying about 25,000 tons of fuel for Gadhafi.

The tanker, Anwaar Afriqya, was visible Wednesday in Tobruk's harbor. According to online shipping records, the Libyan-owned vessel departed several days ago from a Greek refinery port and had been due to arrive Tuesday in the western oil port of Zawiya.

Gheriani also claimed the rebels were still fighting on the outskirts of Ajdabiya and attacking regime forces with warplanes, although he was not more specific about the aircraft and that could not be verified.

Gadhafi's son, Seif al-Islam, warned the rebels the regime was closing in on them and urged them to leave the country.

"We don't want to kill, we don't want revenge, but you, traitors, mercenaries, you have committed crimes against the Libyan people: leave, go in peace to Egypt," he said in an interview with Lyon, France-based EuroNews television. "Military operations are over. Within 48 hours everything will be finished. Our forces are almost in Benghazi. Whatever the decision, it will be too late."

Gheriani said rebels in Benghazi would be ready for an attack.

"A large percentage of Benghazi's population is armed. Can Gadhafi bomb the city? Sure he can. Can he go in? I don't think so," he told The Associated Press. "Also, I think it is too far for his supply lines."

Gheriani said anti-aircraft equipment has been deployed, and the army mobilized, although he didn't know where. There have been few signs in recent days of the rebels digging in defensive preparations on the city's outskirts.

An activist hiding out in Ajdabiya said rebel holdouts in the city were expecting reinforcements from Benghazi to arrive and help them regroup. He said that the shelling stopped at about 2 p.m. but clashes continued on the southern and eastern fringes of the city.

"We are optimistic," Abdel-Bari Zwei said by cell phone as he headed to a nearby mosque for night prayers. "Yes, the families left but the youths and the men are still here."

The city's loss would be a major setback to the rebels, who less than two weeks ago were poised to march on Tripoli, the capital, and had appeared capable of sweeping Gadhafi out of power, inspired by successful uprisings in Egypt and Tunisia. But the regime's better armed and organized military has reversed the tide.

Gadhafi's forces also launched an attack on Misrata -- which for days has been under a punishing blockade, its population running out of supplies. The barrage came a day after the government recaptured the last rebel-held city west of Tripoli, solidifying his control over the coastline from the capital to the Tunisian border.

Momammed Ali, an opposition activist based in Dubai, said he was in contact with people in Misrata and water, electricity and cell phone service had been cut off. At least eight people were killed and 11 injured in the attack, he said, although the toll could not be confirmed.