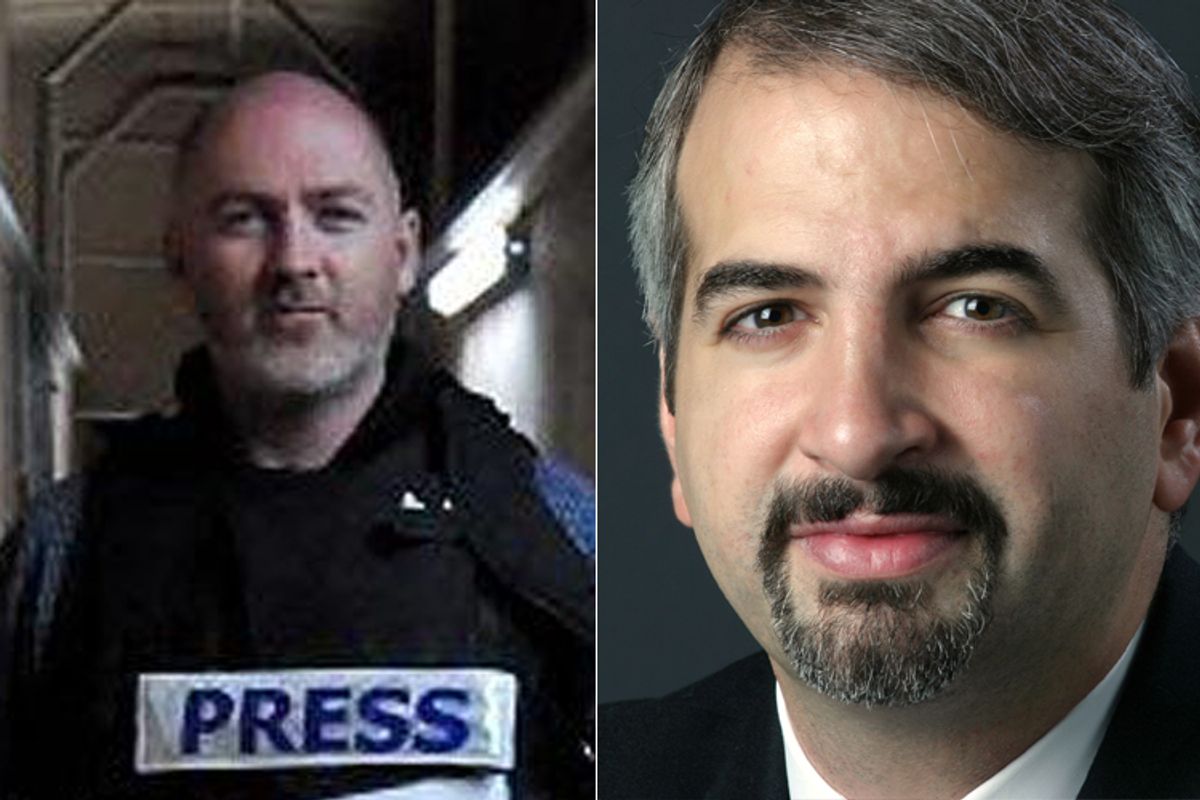 The New York Times says it's holding out hope that four of its journalists who went missing while covering the Libyan conflict are alive and in the custody of the Libyan government.

The four were last in contact with editors on Tuesday from the northern port city of Ajdabiya where they were covering the retreat of rebels.

"We are grateful to the Libyan government for their assurance that if our journalists were captured they would be released promptly and unharmed," executive editor Bill Keller said in a statement on Wednesday.

He said there were unconfirmed reports that the journalists had been detained at a government checkpoint between Ajdabiya and Benghazi, a rebel stronghold. If so, Keller said, they would eventually be taken to Tripoli.

"Beyond that, we're still pretty much in the dark," he added.

The missing journalists are Pulitzer Prize-winning reporter Anthony Shadid, the newspaper's Beirut bureau chief; Stephen Farrell, a reporter and videographer; and photographers Tyler Hicks and Lynsey Addario. In 2009, Farrell was kidnapped by the Taliban and later rescued by British commandos.

"Their families and their colleagues at The Times are anxiously seeking information about their situation, and praying that they are safe," Keller said.

In September 2009, Farrell and Sultan Munadi, an Afghan journalist and interpreter who worked regularly with the Times and other news organizations, were taken hostage when they went to cover the aftermath of a NATO airstrike that killed scores of civilians in northern Afghanistan.

Munadi and a British commando died in the raid that rescued Farrell, a Briton.

Britain is currently holding an inquest into the death of the parachute regiment soldier, Cpl. John Harrison, in Salisbury. The inquest heard Wednesday that the soldier was shot dead just seconds after leading his unit out of a helicopter while under heavy insurgent fire during the rescue mission.

Farrell also was kidnapped in 2004 in Fallujah, Iraq. He previously worked for the Times of London.

In 2008, New York Times reporter David Rohde was kidnapped while trying to make contact with a Taliban commander in Afghanistan. Rohde and an Afghan colleague escaped in June 2009 after seven months in captivity, most spent in Taliban sanctuaries in Pakistan.

The Committee to Protect Journalists says it has documented five assaults, 25 detentions and dozens of attempts to obstruct or intimidate journalists as they try to cover Libya's unrest.

The White House on Wednesday urged the Libyan government to refrain from harassing or using violence against journalists. Obama spokesman Jay Carney said the United States is firm in its belief that journalists should be protected and allowed to do their work.

The advocacy group Reporters Without Borders said it was asking its correspondents in Libya to help track down the journalists' whereabouts.

"It's a very dangerous climate for reporters right now," said Clothilde Le Coz, Washington director for Reporters Without Borders. "It's a reminder that these are real people, and they are putting themselves at real risk to bring information out of these places."

Pro-Gadhafi forces have largely gained control of Ajdabiya after two days of relentless shelling but still face pockets of resistance in the city of 140,000 people.

The breakdown in rebel defenses in Ajdabiya threatened to open the gateway to the long stretch of eastern Libya that has been in the control of the opposition, including Benghazi, Libya's second-largest city and the de facto capital of the opposition.

Shadid's father, Buddy Shadid, said he last spoke to his son on Monday. The reporter was tired and living on cans of tuna, but had planned to spend another week covering Libya.

"I told him it's so crazy there, no one knows who's friend, who's foe. But he said he knew what he's doing, not to worry," Buddy Shadid said. "We're all just praying for his safety."

Shadid previously worked for the Washington Post, The Associated Press and the Boston Globe. He won the Pulitzer Prize for international reporting in 2004 and 2010 for his coverage of Iraq.

Hicks, a former photographer for the Troy Daily News in Ohio and The Wilmington Star-News in North Carolina, had worked in hotspots from Haiti to Chechnya. He was named Newspaper Photographer of the Year in 2007 by Pictures of the Year International and won an Infinity award from the International Center of Photography in 2001.

Addario was part of the New York Times team that won the 2009 Pulitzer Prize for international reporting and also has worked for National Geographic and Time magazine. She won a MacArthur Fellowship, or "Genius Grant," in 2009.

Covering Libya has quickly become more dangerous for reporters than the earlier uprising in Egypt, said Joel Simon, executive director of the Committee to Protect Journalists. He said Egyptian President Hosni Mubarak had tried to preserve his international reputation by reining in government attacks on journalists.

"There's no such calculation going on in Libya," Simon said. "It's a very difficult, precarious situation for the press right now."

On Saturday Al-Jazeera cameraman Ali Hassan al-Jaber was killed and correspondent Baybah Wald Amhadi was wounded when their car was ambushed near Benghazi.

In all, there have been more than 300 attempts to intimidate or obstruct reporters since a wave of Middle East uprisings began in December in Tunisia, the Committee to Protect Journalists said.

CBS said its reporter Lara Logan was attacked and sexually assaulted in Egypt while covering reaction to Mubarak's resignation. A CNN crew including reporter Anderson Cooper was also attacked by pro-Mubarak protesters.