Is Obama's NCAA bracket really that big a problem? 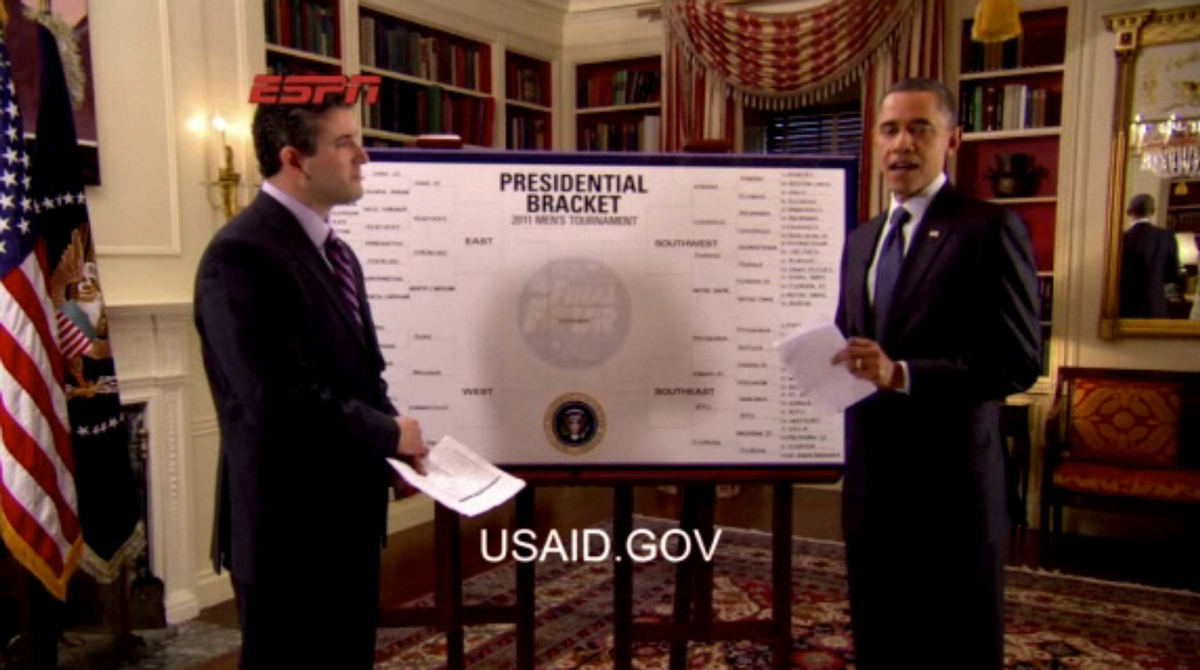 Have you heard? Though Japan and Libya dominate today's media coverage, one story out of the White House is also generating headlines: Barack Obama filled out his March Madness bracket. The president -- in what's become an annual tradition -- filmed a short segment with ESPN's Andy Katz yesterday evening, breaking down the tournament's latter rounds, pick-by-pick.

Obama's predictions have become a bit of a political Rorschach test. Think Obama's become cautious to a fault since his midterm shellacking? Well then, you probably noticed that he placed every single No. 1 seed in the Final Four -- not exactly an act of predictive derring-do. But, more to the point, the segment seems to have sharply divided the president's supporters and detractors. To many, Obama's bracket exercise was nothing more than a pleasant, if inconsequential diversion. But another vocal group of commentators have spun the display as nothing less than a dereliction of duty.

Take, for example, the more outspoken conservative pundits. Glenn Beck wondered if Obama had been hit with a "stupid stick." Big Government's editor in chief Mike Flynn, similarly,  chastised the very idea of Obama participating in the bracket tradition:

Japan is suffering from a natural disaster that threatens to turn into an existential crisis. Colonel [Gadhafi] has unleashed a blistering assault on pro-democracy rebel forces. Large swaths of the Middle East are in turmoil. The federal government is bleeding red ink, with absolutely no end in site. The economy sucks and is getting battered by skyrocketing commodity prices and a volatile oil market. Near-record numbers of Americans are leaving the work force. If the world isn’t quite on fire … it is at least approaching a slow burn. But what's all that against a little MARCH MADNESS!

Martin Bashir took to the president's defense, pointing out that Obama did begin the segment by urging viewers to donate to Japanese relief efforts. The MSNBC host went on to argue that everyone, even the president, needs a diversion every once in a while:

Now, given what the president has said, it would be churlish to condemn him for wasting time, particularly since much of the nation is transfixed by these games. And that's the point: people need some diversion, some entertainment, particualrly at times of stress. And the president doesn't have many outlets ... So, with our own commander in chief, spending a few minutes on his favorite sport -- let's give him a break, and hope that he too gains some benefit from a small diversion away from the huge challenges that still demand his attention every waking hour.

The White House defended Obama's decision to fill out a bracket in a press conference this afternoon. Press secretary Jay Carney explained the president was fully capable of juggling several issues and that using the broadcast opportunity to ask for donations made sense.

Which side are you on? Did the few minutes the president set aside to share his bracket picks with the nation distract him from more important duties? Or should we give him a break because, well, the man loves basketball. Weigh in with your thoughts in the comments section.

And by the way, President Obama thinks Kansas will win.