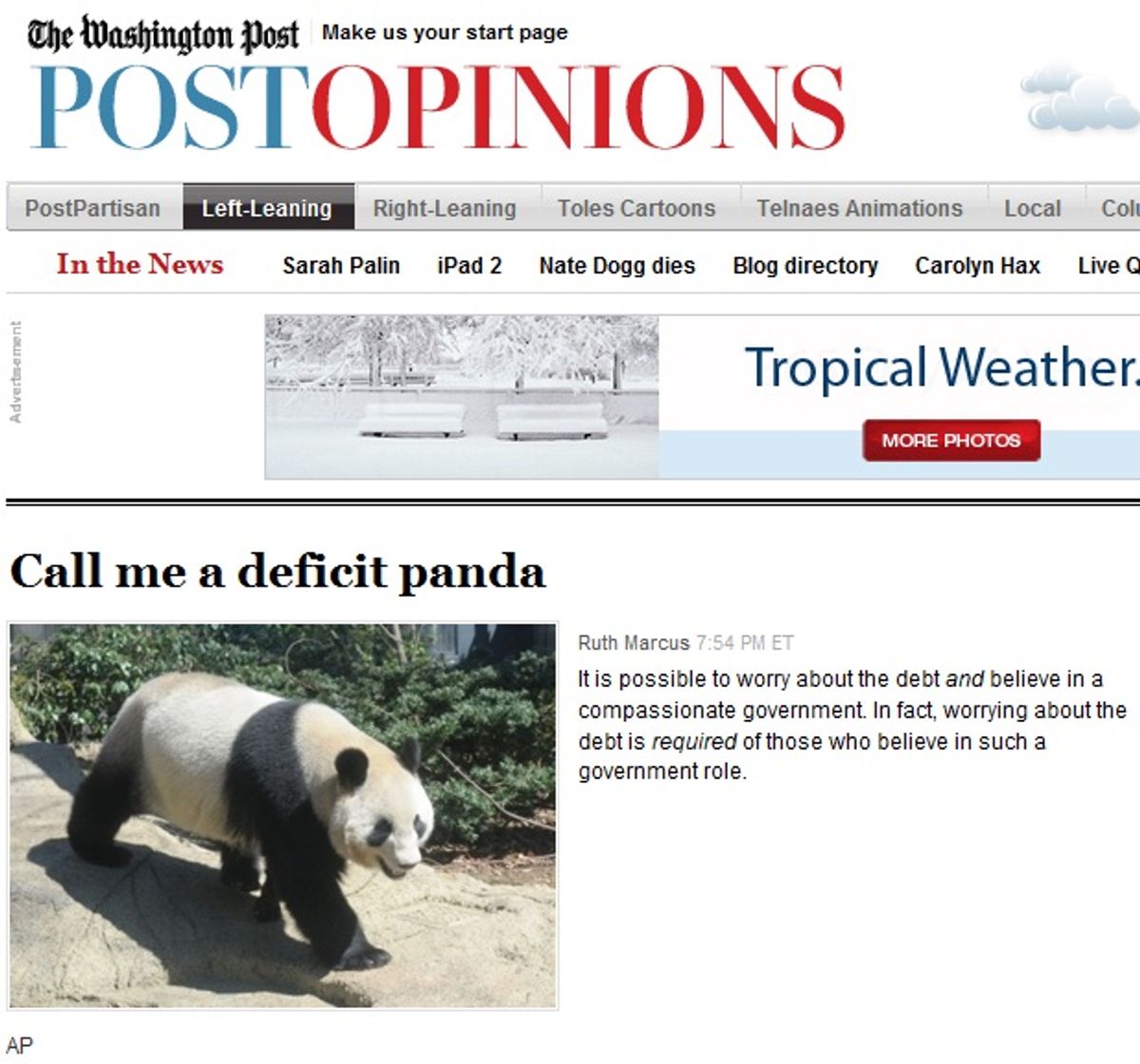 The Washington Post's website got a fancy new redesign. Now all the headlines are in serious-looking black text instead of frivolous blue and Ezra Klein's RSS is broken, I think. But the biggest news is that their opinion section -- the worst opinion section in America -- is now divided into two tabs organized by ideology. The columnists are now split into "left-leaning" warmongering Beltway-lifer hacks and "right-leaning" warmongering Beltway-lifer hacks.

Dana Milbank -- who voted for John McCain for president in 2000, Chuck Hagel for president in 2004, and Michael Bloomberg for president in 2008 -- is "left-leaning," because he dislikes Glenn Beck. So is Richard Cohen, who hates Wikileaks and democracy for Muslims and loves sexual harassment. The right-wingers are mainly morally depraved torture-defending former Bush speechwriters and the sad ghost of George Will, still haunting our nation's newspaper opinion sections and jewel box baseball parks. Had they not fired Dave Weigel I assume he'd be left-leaning, maybe? Or maybe they fired him not for his JournList comments but because they weren't sure where to put him after the redesign. Hamilton Nolan already made the joke I wish I'd made: "It's a good thing they waited until David Broder passed away, or they would have had to give him his very own tab."

It is actually weird that there is no "centrist" or "third way" tab, because those idiots are the Post's favorite sorts of political people! I think they all now qualify as "left-leaning," depressingly enough. The Post categories are more accurately described as "moderate liberal-to-center-right-leaning" and "totalitarian," basically. Your acceptable range of elite opinion, ladies and gentlemen!

This whole thing is presumably Editorial Page Director Fred Haitt's way of proving that his awful section is totally fair -- they have this many liberals and this many conservatives -- while also demonstrating that he seriously does not even understand the substance of the myriad criticisms lobbed against his management of what passes for important media real estate in this miserable era. (Also the libertarians are left out and they'll get cranky if you call them "left-" or "right-leaning.")