How can Michele Bachmann be president if she won't release her birth certificate?

Despite a promise to unveil it at the first debate, we still have no proof that the would-be candidate is a citizen 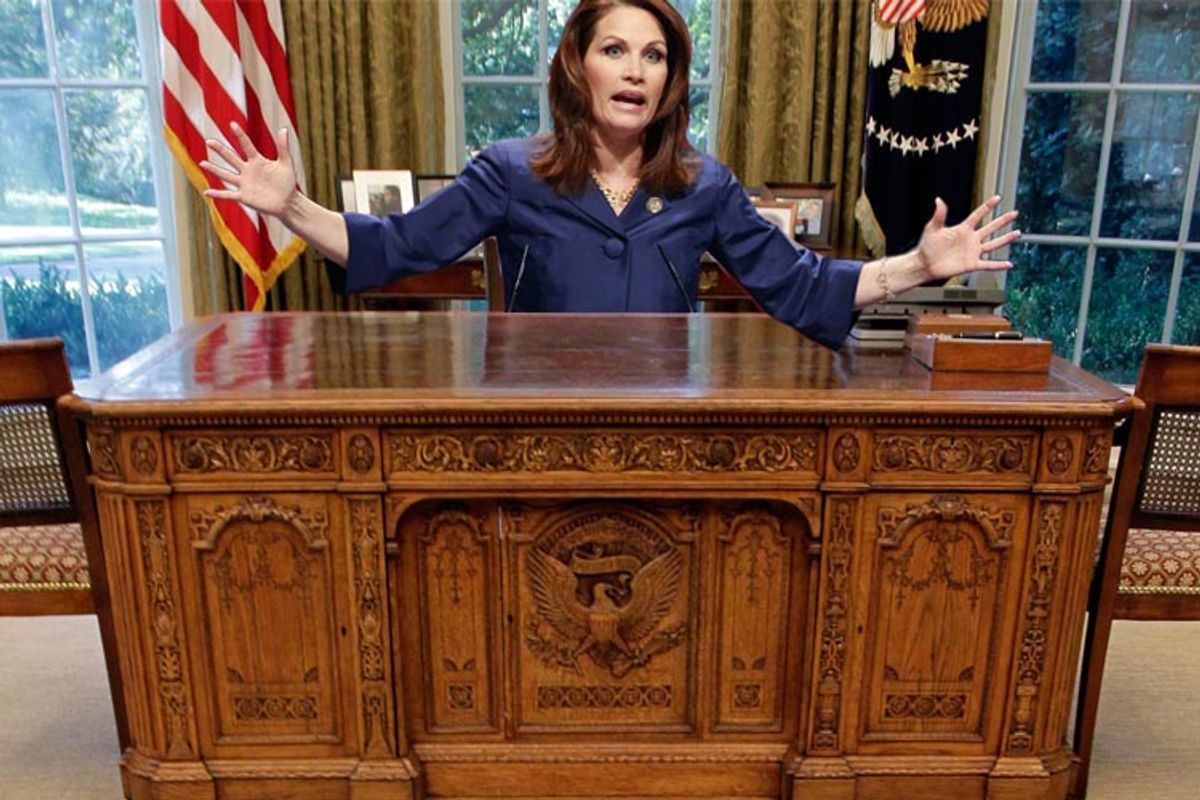 "The first thing I would do in the first debate is offer my birth certificate so we can get that off the table," Minnesota Rep. Michele Bachmann said last week when asked about a potential presidential run. Bachmann, who recently came out as birther-curious, has been toying with the idea of mounting one of those fake presidential campaigns lately, because it would bring her attention and money, and attention and money are what she lives for.

Bachmann claims to have been born in Waterloo, Iowa, but when the Minneapolis City Pages asked to see her birth certificate, her office did not produce it. So I guess we'll just have to take her word for it that she was born in the United States.

But, Talking Points Memo reports, that uncertainty about her place of birth is not stopping some fans of Michele's from trying to push her into the ring. The people behind the campaign to get Bachmann elected speaker of the House -- a campaign that grew to encompass "nearly 1,000 supporters" -- are now launching a petition urging Bachmann to run for president. Because she really needs convincing before she decides to get a tremendous amount of unearned press and campaign donations.

Bachmann has already been spending a great deal of time in New Hampshire, counting all the members of the MSM, and in Iowa, where she will speak to a home-schooling group about the dozens of children she has home-schooled to believe in complete nonsense.

The National Review's Rich Lowry says there's no downside to Bachmann running! "Any showing that beats low expectations will help her, and she could be a real force in Iowa." Lowry avoids expressing his own feelings toward Bachmann, but some NRO commenters seem to like her: "Bachmann is not my preferred candidate, but I welcome her into the field. She is better than Romney, Daniels, Pawlenty and Huntsman by a wide margin in my opinion." (There is some consensus that her various egregious misstatements of historical fact and other flubs were actually somehow caused by the "MSM.")

Bachmann would be a fine presidential candidate. She has, for one thing, no record. Sure, there is a history of very public statements, but nothing else, really. She has never been a member of a legislative majority and thus has no clue how or even why to act as a "legislator." She has advanced solely through the surefire media strategy of being a shameless, loud idiot.

Of course, it will all collapse once that birth certificate reveals that she was born in Switzerland.