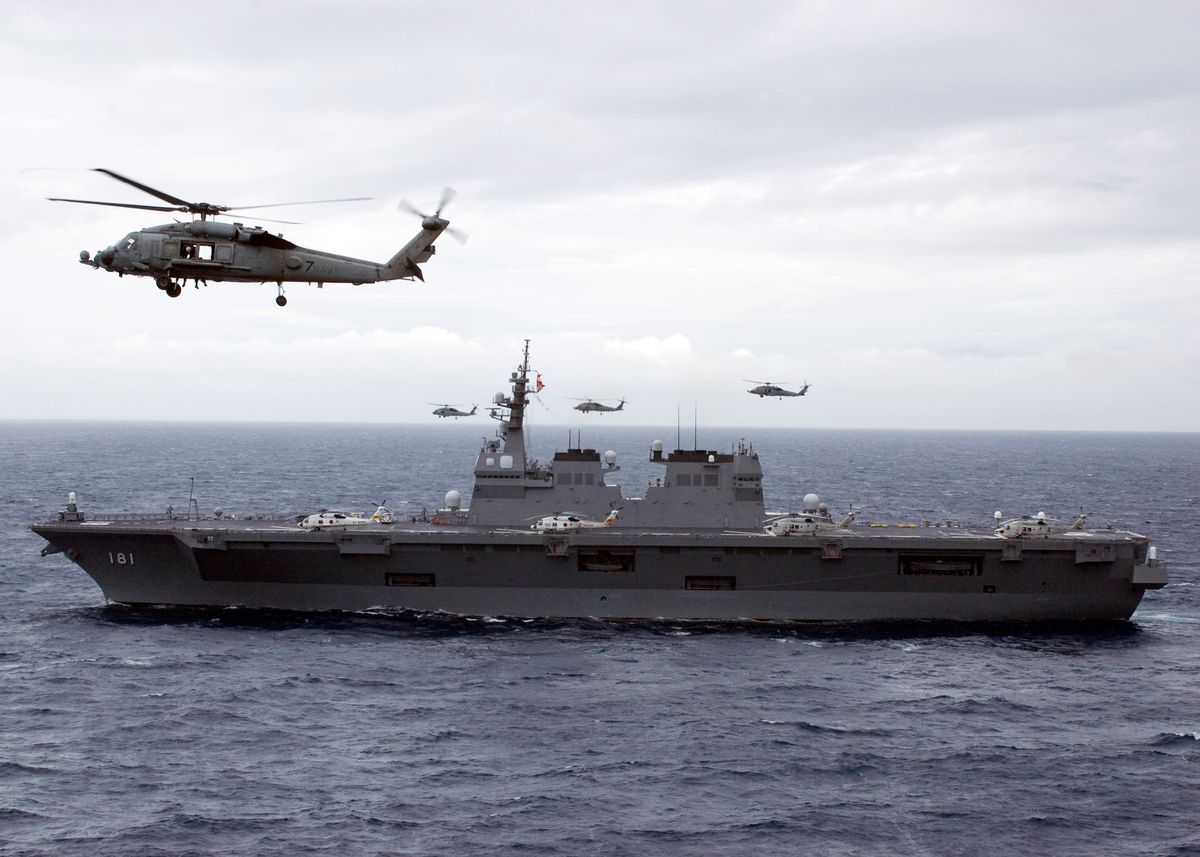 The top U.S. nuclear regulatory official gave a far bleaker assessment of the crisis than the Japanese, and the U.S. ambassador warned U.S. citizens within 50 miles (80 kilometers) of the Fukushima Dai-ichi plant on the northeast coast to leave the area or at least remain indoors.

The Japanese government said it had no plans to expand its mandatory, 12-mile (20-kilometer) exclusion zone around the plant along the northeastern coast, while also urging people within 20 miles (30 kilometers) to stay inside.

The troubles at the nuclear complex were set in motion by last week's 9.0-magnitude earthquake and tsunami knocked out power and destroyed backup generators needed for the reactors' cooling systems. That added a nuclear crisis on top of twin natural disasters that likely killed well more than 10,000 people and left hundreds of thousands homeless.

Two Japanese military CH-47 Chinook helicopters began dumping seawater on the complex's damaged Unit 3 at 9:48 a.m. (0048 GMT, 8:48 p.m. EDT), defense ministry spokeswoman Kazumi Toyama said. The choppers dumped at least four loads on the reactor in just the first 10 minutes, though television footage showed much of it appearing to disperse in the wind.

Chopper crews flew missions of about 40 minutes each to limit their radiation exposure, passing over the reactor with loads of about 7,500 liters (about 2,000 gallons) of water.

The dousing is aimed at cooling the Unit 3 reactor, as well as replenishing water in that unit's cooling pool, where used fuel rods are stored, Toyama said. The plant's owner, Tokyo Electric Power Co., said earlier that pool was nearly empty, which would cause the rods to overheat and emit even more radiation.

Defense Minister Toshifumi Kitazawa told reporters that emergency workers had no choice but to try the water dumps before it was too late.

Along with the helicopter water drops, military vehicles designed to extinguish fires at plane crashes were being used to spray the crippled Unit 3, military spokesman Mitsuru Yamazaki said. The high-pressure sprayers were to allow emergency workers to get water into the damaged unit while staying safely back from areas deemed to have too much radiation.

But special police units trying to use water cannons -- normally used to quell rioters -- failed in their attempt to cool the unit when the water failed to reach its target from safe distances, said Yasuhiro Hashimoto, a spokesman for the Nuclear And Industrial Safety Agency.

Officials of Tokyo Electric Power Co., which owns the plant, said they believed they were making headway in staving off a catastrophe both with the spraying and with efforts to complete an emergency power line to restart the plant's own cooling systems.

The interim power line would be a temporary but "reliable" way to cool down the reactors and storage pools, said Teruaki Kobayashi, a facilities management official at Tepco. "This is a first step toward recovery," he said.

Crews were standing by to resume spraying Friday.

U.S. Nuclear Regulatory Commission Chairman Gregory Jaczko said at a congressional hearing in Washington that all the water was gone from that unit's spent fuel pool. Jaczko said anyone who gets close to the plant could face potentially lethal doses of radiation.

"We believe radiation levels are extremely high," he said.

Tokyo Electric executives said Thursday that they believed the rods in that pool were covered with water, but an official with Japan's nuclear safety agency later expressed skepticism about that and moved closer to the U.S. position.

"Considering the amount of radiation released in the area, the fuel rods are more likely to be exposed than to be covered," Yuichi Sato said.

Emergency workers were forced to temporarily retreat from the plant Wednesday when radiation levels soared, losing precious time. While the levels later dropped, they were still too high to let workers get close.

The storage pools need a constant source of cooling water. Even when removed from reactors, uranium rods are still extremely hot and must be cooled for months, possibly longer, to prevent them from heating up again and emitting radioactivity.

A core team of 180 emergency workers has been at the forefront of the struggle at the plant, rotating in and out of the complex to try to reduce their radiation exposure.

But experts said that anyone working close to the reactors was almost certainly being exposed to radiation levels that could, at least, give them much higher cancer risks.

"I don't know any other way to say it, but this is like suicide fighters in a war," said Keiichi Nakagawa, associate professor of the Department of Radiology at University of Tokyo Hospital.

Experts note, though, that radiation levels drop quickly with distance from the complex. While elevated radiation has been detected well outside the evacuation zone, experts say those levels are not dangerous.

In a statement, U.S. Ambassador John V. Roos made his evacuation recommendation "in response to the deteriorating situation" at the Fukushima complex. In Washington, the State Department warned U.S. citizens to consider leaving the country, and offered voluntary evacuation to family members of U.S. personnel in Tokyo, Yokohama and Nagoya.

Chartered planes also would be brought in for private American citizens who wished to leave, the State Department said.

While American officials have been careful not to criticize Japan's response, they have made clear it's difficult to ascertain what is going on.

Nearly a week after the disaster, police said more than 452,000 people were staying in schools and other shelters, as supplies of fuel, medicine and other necessities ran short. Both victims and aid workers appealed for more help.

"There is enough food, but no fuel or gasoline," said Yuko Niuma, 46, as she stood looking out over Ofunato harbor, where trawlers were flipped on their sides.

Along the tsunami-savaged coast, people must stand in line for food, gasoline and kerosene to heat their homes. In the town of Kesennuma, they lined up to get into a supermarket after a delivery of key supplies, such as instant rice packets and diapers.

Each person was only allowed to buy 10 items, NHK television reported.

With diapers hard to find in many areas, an NHK program broadcast a how-to session on fashioning a diaper from a plastic shopping bag and a towel.

More than 5,300 people are officially listed as dead, but officials believe the toll will climb to well over 10,000.

Other countries have complained that Japan has been too slow and vague in releasing details about its rapidly evolving crisis at the complex of six reactors along Japan's northeastern coast.