Russia, the U.S. and others vote in favor of the resolution. Five countries, including China, abstain 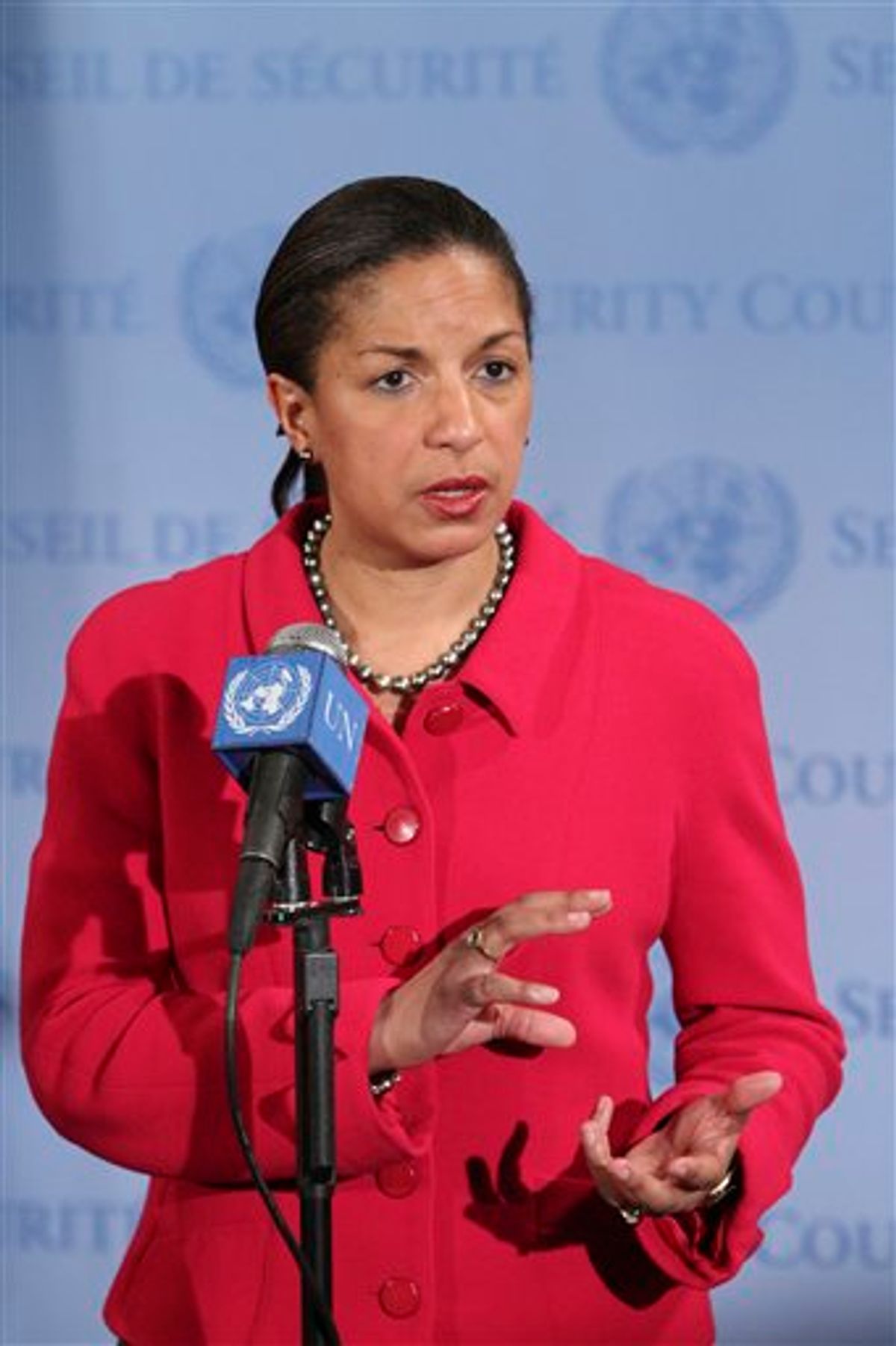 American Ambassador to the U.N. Susan Rice speaks to reporters after a Security Council meeting on the situation in Libya, Wednesday, March 16, 2011 at United Nations headquarters. (AP Photo) (AP)
--

UPDATE (6:40 P.M. EST):
The UN has voted 10 to 0 in favor of a no-fly zone in Libya. Neither Russia nor China, the two expected hold outs, voted against the resolution. Russia voted in favor, and China, along with five other countries, abstained from voting.

The U.N. Security Council scheduled a vote Thursday on a resolution that would impose a no-fly zone over Libya and authorize "all necessary measures" to protect civilians from attacks by Moammar Gadhafi's forces.

France's U.N. Ambassador Gerard Araud said he expected more than one of the council's 15 members to abstain when the vote took place at 6 p.m. EDT (2300 GMT), but council diplomats said they did not expect the resolution to be vetoed.

The resolution needs nine "yes" votes and no veto by a permanent member to be adopted.

Russia and China, which have veto power, have expressed doubts about the United Nations and other outside powers using force against Gadhafi, and diplomats said other council nations reacted cautiously, including Germany, India, Brazil and South Africa.

Even if all six countries abstained, the resolution would still have the minimum nine "yes" votes.

The United States joined the resolution's initial supporters -- Britain, France and Lebanon -- not only in pushing for a speedy vote but in pressing for action beyond setting up a no-fly zone in order to protect civilians from air, land and sea attacks by Gadhafi's fighters.

The text that will be put to a vote would "establish a ban on all flights in the airspace of the Libyan Arab Jamahiriya in order to help protect civilians," diplomats said. It also would authorize U.N. member states to take "all necessary measures" to protect civilians under threat of attack, while excluding an occupation force, the diplomats said.

A French diplomatic official in Paris said military action could follow "in a very short period of time."

The official, speaking on condition of anonymity because he was not authorized to speak about the issue publicly, said France foresees a "coalition of the willing" that would include support from Arab states but would not involve a ground operation.

French officials have said Arab countries' support could come, for example, by providing use of their air bases, the official said.

U.S. Secretary of State Hillary Rodham Clinton told reporters in Tunisia on Thursday that a U.N. no-fly zone over Libya would require action to protect the planes and pilots, "including bombing targets like the Libyan defense systems."

Council members agreed to call a vote after a close-door meeting to discuss reactions to the draft sent to capitals overnight. It was hammered out during more than eight hours of sometimes heated negotiations on Wednesday.

With Gadhafi's forces intensifying attacks and heading toward opposition-held Benghazi, Libya's second-largest city, supporters of the resolution have been pressing for speedy council action.

U.S. Ambassador Susan Rice said late Wednesday the Obama administration is "fully focused on the urgency and the gravity" of the situation in Libya.

"We are interested in a broad range of actions that will effectively protect civilians and increase the pressure on the Gadhafi regime to halt the killing and to allow the Libyan people to express themselves in their aspirations for the future freely and peacefully," Rice told reporters. "Those include discussion of a no-fly zone, but the U.S. view is that ... a no-fly zone has inherent limitations in terms of protection of civilians at immediate risk."

According to a council diplomat who spoke on condition of anonymity because the talks were private, Rice said the U.S. will not act without Security Council authorization, does not want to put U.S. ground troops into Libya, and insists on broad international participation, especially by Arab states.

President Barack Obama and his top national security aides had been cautious with calls for a no-fly zone, which the Pentagon described as a step tantamount to war. The U.S. fears involvement in Libya could further strain its already stretched military and entangle the country in an expensive and messy conflict in another Muslim country.

The council diplomat said Rice told the ambassadors the Obama administration believes there is a significant risk of major atrocities by Gadhafi's forces in Benghazi and wants the council to do everything possible to prevent that and protect civilians.

Michael Mann, a spokesman for EU foreign policy chief Catherine Ashton, said Thursday that even as Gadhafi's forces advanced, there would be no talks with his regime. He called the situation on the ground "extremely worrying."

Asked what the EU would do if Gadhafi's forces retook Benghazi, Mann said, "We have always said all along that we are planning for all options."

He also said the EU was looking to the U.N. Security Council before making further decisions.

Russia's U.N. Ambassador Vitaly Churkin, whose government had expressed misgivings about a no-fly zone, proposed that the council vote first on a resolution calling for a cease-fire in Libya.

Rice told reporters a majority of council members did not support a separate cease-fire resolution but said that a call for a cease-fire could be incorporated in the no-fly resolution.

France and Britain failed to win support for a no-fly zone during a two-day meeting of Group of Eight foreign ministers in Paris earlier Tuesday and the G-8's final communique did not mention a flight ban, leaving any action to the Security Council.

The Security Council on Feb. 26 imposed an arms embargo on Libya and ordered all countries to freeze assets and ban travel for Gadhafi and some close associates. It also referred the regime's deadly crackdown on protesters to the International Criminal Court, for an investigation of possible crimes against humanity.

Associated Press Writers Anita Snow at the United Nations and Jamey Keaten in Paris contributed to this report.