Why Obama is the favorite for 2012

Political observers are predicting a second term -- but he should thank Huckabee, Gingrich and Bachmann 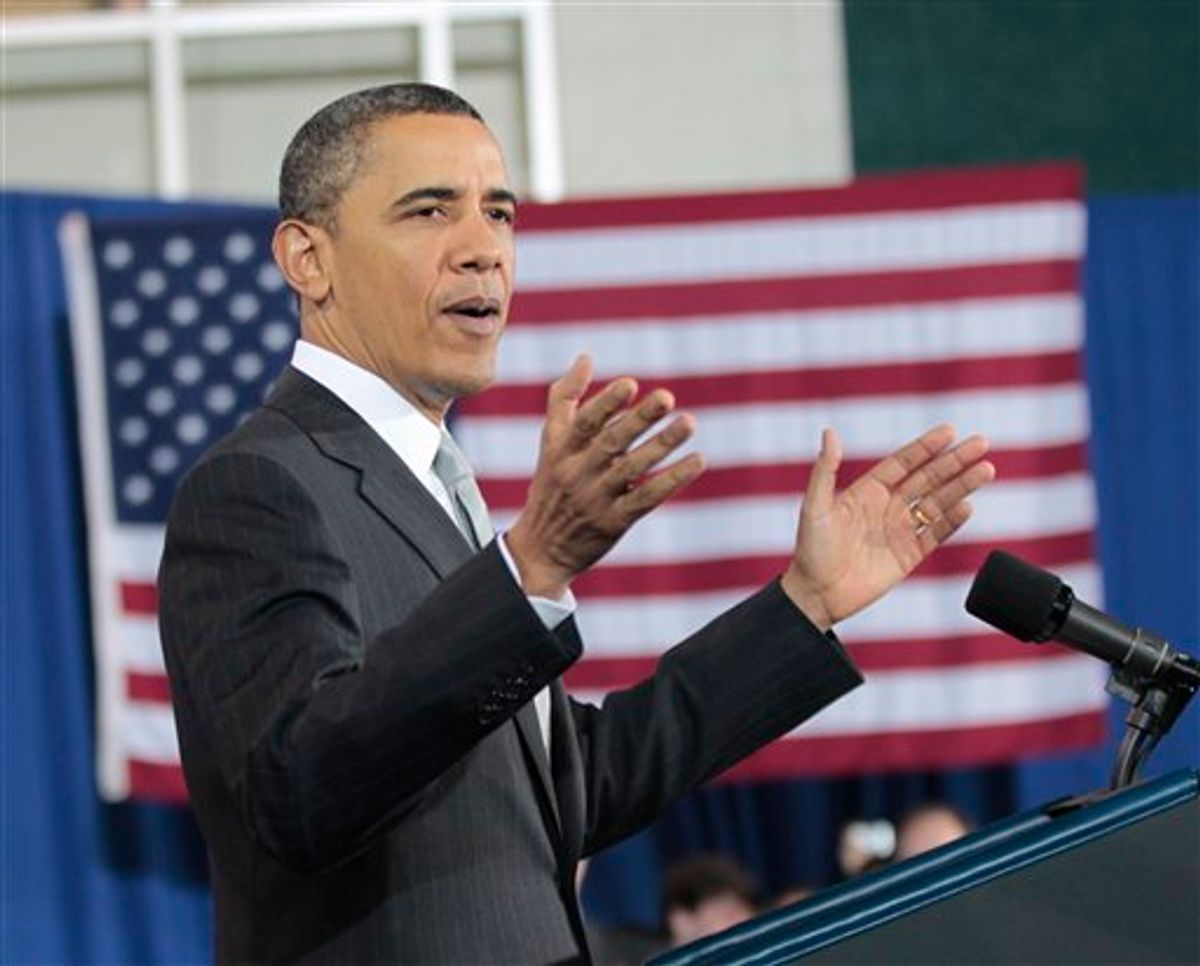 Many Americans follow politics the way lukewarm fans follow sports, paying close attention only during the playoffs or presidential elections. Most would be surprised to be told that most professional observers in Washington think President Obama's a strong bet to win re-election in 2012.

Never mind that events in Japan and the Middle East underline the folly of predicting the future. Some people can't help themselves. Most who think that way give two reasons: the near-comical weakness of the Republican field and Obama's protean ability to pose as a pragmatist surrounded by zealots.

Several GOP contenders do appear to be abandoning Fox News for the Comedy Channel. Newt Gingrich told the Christian Broadcast Network that patriotism drove him into adultery. "There's no question at times of my life, partially driven by how passionately I felt about this country, that I worked far too hard and things happened in my life that were not appropriate," the former Speaker confessed. Horny are the brave. She showed me the American flag on her thong, and my pants fell down. Evidently, Newt grew so weary impeaching Bill Clinton for adultery that he fell into the arms of the third Mrs. Gingrich. Now a 67 year-old granddad, he vows fidelity.

Then there's Mike Huckabee, probably the Republicans' strongest candidate, despite being a former Arkansas governor. Yakking on talk radio, the Huckster explained that the Mau-Mau rebellion during President Obama's Kenya childhood caused him, unlike most Americans, to hate British imperialism. Never mind that millions with ancestors in formerly subject nations such as Ireland, India and the United States of America don't entirely share Huckabee's nostalgia.

History records that Obama never lived in Africa. Challenged, Huckabee chortled that he should have read his own book. Why, page 183 of "A Simple Government" explains that the president actually learned anti-British passions in Indonesia. OK, so Indonesia was a Dutch, not a British colony. It's definitely a foreign country, and Obama definitely lived there long ago. We're supposed to admire Huckabee's self-deprecating wit.

Except, guess what? The worker bees at mediamatters.org checked page 183. Uh-oh. So they ran a Kindle search. The words "Indonesia" and "Indonesian" appear nowhere in Huckabee's book. Here we go again. Blaming the "left-wing media," Huckabee's making things up, pretty much as he does whenever anybody brings up the serial murderers he got sprung from the Arkansas penitentiary -- two at last count.

Elsewhere, the photogenic Michelle Bachmann gave two speeches moving the midnight ride of Paul Revere and the "shot heard 'round the world" -- fired at a British soldier, come to think of it -- from Massachusetts to New Hampshire, where there's an early presidential primary. Meanwhile, a Fox News gremlin told New York magazine that retired Gov. Sarah Palin was cautioned against her infamous "blood libel" video, implying that the real victim of the grotesque assassination attempt against Arizona Rep. Gabrielle Giffords was Sarah Palin.

You can definitely fool all of the GOP "base" all of the time. They've already forgotten the catastrophic mess President George W. Bush left behind, and grow apoplectic when anybody reminds them. It's the broader electorate that's the problem. Presidential candidacies have foundered on far less consequential blunders than Republican front-runners made last week alone. It's actually scary to think that's the best a major political party can do.

Anyway, barring catastrophe, Obama definitely looks good for a second term. Ah, but to what end, pray? There, it seems to me, tea party dogma and Wisconsin Gov. Scott Walker have given President Obama a chance to bridge the historic rift between the working middle class and the Democratic Party cogently analyzed in Mother Jones by the estimable Kevin Drum.

Starting with the culture wars of the Vietnam era, Drum explains, "New Left activists derided union bosses as just another tired bunch of white, establishment Cold War fossils, and as a result, the rupture of the Democratic Party that started in Chicago in 1968 became irrevocable in Miami Beach four years later." That break led to the 1972 nomination of George McGovern and the landslide victory of Richard M. Nixon -- whose "Southern Strategy" still defines today's political landscape.

For all their faults, as labor unions lost power, wealth and political influence have grown ever more concentrated at the very top. The United States is becoming a plutocracy. The numbers can be startling, with Wall Street profits rising 720 percent between 2007 and 2009 even as unemployment rose 102 percent. Wealth distribution has become grotesquely unbalanced.

In Wisconsin, Gov. Walker's brazen attempt to break the unions and defund the Democratic Party has sparked mass demonstrations dwarfing tea party extravaganzas the press made so much of -- hardhats and university teaching assistants marching together for the first time in a generation. If President Obama's looking for a parade to get in front of, that would be the one.