My Irish lessons in grief

I was in Ireland with my husband when his father died. While coping with the sadness, we discovered a strange magic 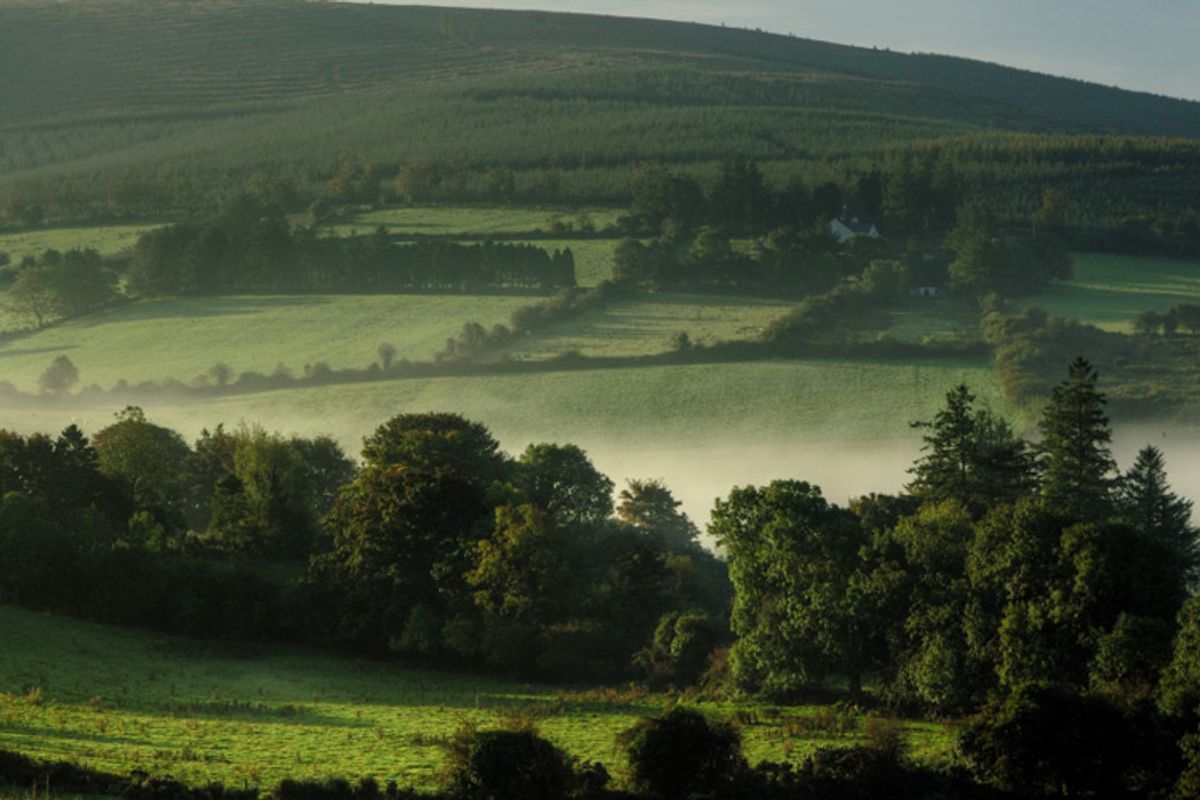 I was standing in a kitchen in Northern Ireland, baking chocolate muffins from a box, when I got the news that my husband's father had passed away. David and I had just learned the night before that his dad had untreatable cancer, and that it had gone undiagnosed for quite some time. We'd barely had time to process this news when a call came the very next morning informing us that his dad was in a coma. David jumped into a car with his mother and siblings, and they rushed off to the hospital.

I stayed behind at his parents' house so I could look after David's young nephew. The child would only agree to eat muffins, and I was anxiously rinsing mix from a bowl, awaiting an update. Then the text I had been dreading popped up on my phone. Just two words: "It's over."

The swell of hills was just outside the window. The shades of green blurred with my tears, until the colors seemed to swirl into the pale blue sky. A mere month and a half before, David and I had been dancing at our wedding. And now, so soon into our life together, the storm clouds had descended.

I met my husband in New York City, a month before my 30th birthday. He was over from Ireland on a work visa, and I was living in Brooklyn as a Midwestern transplant. We started dating the day after we spotted each other in a shadowy bar on the Lower East Side. Two years later, when his visa expired, we moved to Ireland together. Two years after that, we were still living in an old Georgian flat in Dublin, and words like "wee" and "knackered" had woven their way into my vocabulary.

David's parents resided "in the North," and we would often drive up on weekends for visits. Which is where we were the day his father died. When David returned from the hospital that morning, I wasn't sure how to comfort him. He and I had been lucky so far in our relationship; we hadn't experienced any great loss yet. Faced with his father's passing, I felt awkward, and certain every word out of my mouth was the dumbest thing I'd ever said. I felt clueless how to plan a funeral in a foreign country. And few places have felt more foreign to me than Northern Ireland.

David grew up during "The Troubles," in a Catholic border town that was the stuff of nightly news, with IRA car bombs and snipers in balaclavas. As a kid he walked to school past British soldiers clutching rifles. His youthful memories include the smell of burning buses and the sirens of bomb scares. A far cry from my sleepy Indiana childhood, which was filled with the smell of burning leaves, our only sirens warning us of possible twisters. Before I met him, my knowledge of the Northern Ireland conflict was limited to U2's "Sunday Bloody Sunday" and "In the Name of the Father."

David's father, Fabian, was a well-respected photojournalist during the conflict. He spent those years climbing atop tanks with his Leica, documenting the chaos. When the IRA called the newspaper with threats of a bomb attack, he was one of the few to field the calls. He was also the first journalist to learn that Bobby Sands, the hunger striker, had passed away. No small claim in Northern Ireland.

In one of my last conversations with my father-in-law, we were standing in his kitchen, me with my coffee and him with his tea. We gazed out at the sprawling countryside, a view that still brought him pleasure. He began reminiscing, in the way that older people do, when the past has suddenly become more vivid to them than the present, and it's as though they're describing a newsreel playing in their mind. He told me how he'd been thrown into his role as a journalist, how he'd gone on to cover so many years of war. He spoke with amusement in his voice, as though he himself was still surprised how life had played out. I couldn't quite fathom all that had passed before his eyes: murder and blood and guns pointed. And then suddenly, one day, peace. Quiet, unfathomable peace had come to the rolling hills. After so many years of strife, I wondered if that must have been strangest of all.

"And that's my life story!" he finally said, and winked. "Next time, you'll tell me yours." He turned then, a frail form, and ambled from the room. It was one of the last things he ever said to me.

He had now passed peacefully, though suddenly, at 76. And mere hours after his death, the curtains of his home had all been drawn, and the clocks stopped at 1 p.m. -- the hour he'd left the world. I watched with wonder as cloths were draped over all the mirrors. I was told this was done as a sign of respect, but later, an older woman with wide owl eyes whispered to me that it was so "the spirit wouldn't see itself."

As the family prepared for the wake, the house became a hive of activity. Several kind, industrious neighbors vacuumed and scrubbed, all of them with first names that seemed to end in "een": Ro-sheen and Shawn-een and Maur-een. David and his brothers moved the living room couch to create a large space for the casket. As I watched them shift the furniture, my stomach fluttered. I had only seen a deceased person in the formal setting of a funeral home. I had a hard time imagining the coffin sitting in the very space where David and I sat watching reruns of "The Office" and "Father Ted."

Back in the kitchen, cousins were arranging mountains of dainty teacups and saucers. There would be tea, coffee, but no alcohol. This wouldn't be an Irish wake filled with whiskey and shouting and singing -- the kind I'd read about in books. David's father was a teetotaler, and to honor this, there wouldn't be a drop of "the black stuff" in sight.

The day of the wake, the weather was the typically confusing mix of blinding sunlight and rain that seems to fall from nowhere. David and his three brothers hoisted the coffin onto their shoulders and carried it slowly past the pale flowers of their mother's garden, up the porch steps, and positioned it in its place in the living room. David would later rub his shoulder for days, as though caressing a phantom ache.

The house was soon packed with men wearing crisp white shirts, black trousers and black ties. They looked like a pack of missionaries, or some Irish version of "Reservoir Dogs," as they stood in clusters and reminisced. People shared wild stories of Fabian in his younger years. Dramatic tales of violence and danger shared in conversational tones and sometimes followed by cackles of laughter. One man casually recounted the story of digging a hole under a wall to escape internment.

I felt as though I'd stepped onto another planet. It was July 4. Across the ocean, Americans were wiping barbecue off their fingers on paper napkins. Children were pinching the heated wire ends of sparklers. Here I was sitting, in a dark room in stiff shoes, shaky from my 13th cup of tea. I stared at the coffin. I tried to gather my thoughts. People began passing around our wedding album, and I felt strangely agitated. As though the happiness of those memories was being tainted. That's when I saw my husband watching me across the room with exhausted, red-rimmed eyes. His gentle smile reminded me of the first time I saw him, leaning against the wall of that dark bar. I realized that photo album being passed around only contained our wedding. This – this was marriage.

A few days later, the weather was unusually warm outside, and the whole extended family packed up a picnic and piled into cars. We sat in the damp grass of a park, and as the sun warmed our faces, it felt as though we were beginning the long, slow thaw out of grief.

As we prepared to leave, someone mentioned the Spelga dam, a nearby tourist attraction famous for an optical illusion. There's a small stretch of road in front of the dam where it appears that things actually roll uphill. Tourists drive all the way there to put their cars in neutral, and then sit, astounded, as the vehicle appears to buck gravity and slide the wrong way. It was getting late, but I'd never seen it, and David was insistent that we go.

Our caravan wound around the hairpin turns and 200-foot drops of mountain roads. Puffballs of sheep dotted the hills, their wool tagged with slashes of pink spray paint, as though some lonely farm boy graffiti artist had stumbled across them. We got lost. Took a wrong turn. Turned around. And then there we were, the big dam before us.

Everyone parked and got out of their cars except for David and me. He backed our car up to a precise spot on the road, until we were at a slant, and it looked as though the car was facing the top of a hill, with the rear facing down toward the dam. The whole family – my new family -- gazed down at us with timid, hopeful smiles.

"Ready?" David asked me, the engine idling. He slid the car into neutral, and I could feel everyone watching us, willing the car to roll in reverse, to fly in the face of everything that the universe says can never be changed, never be undone.

In that moment, we all wanted this so badly. Even if it was only an illusion.