The President's ancestry can be traced back to the Emerald Isle 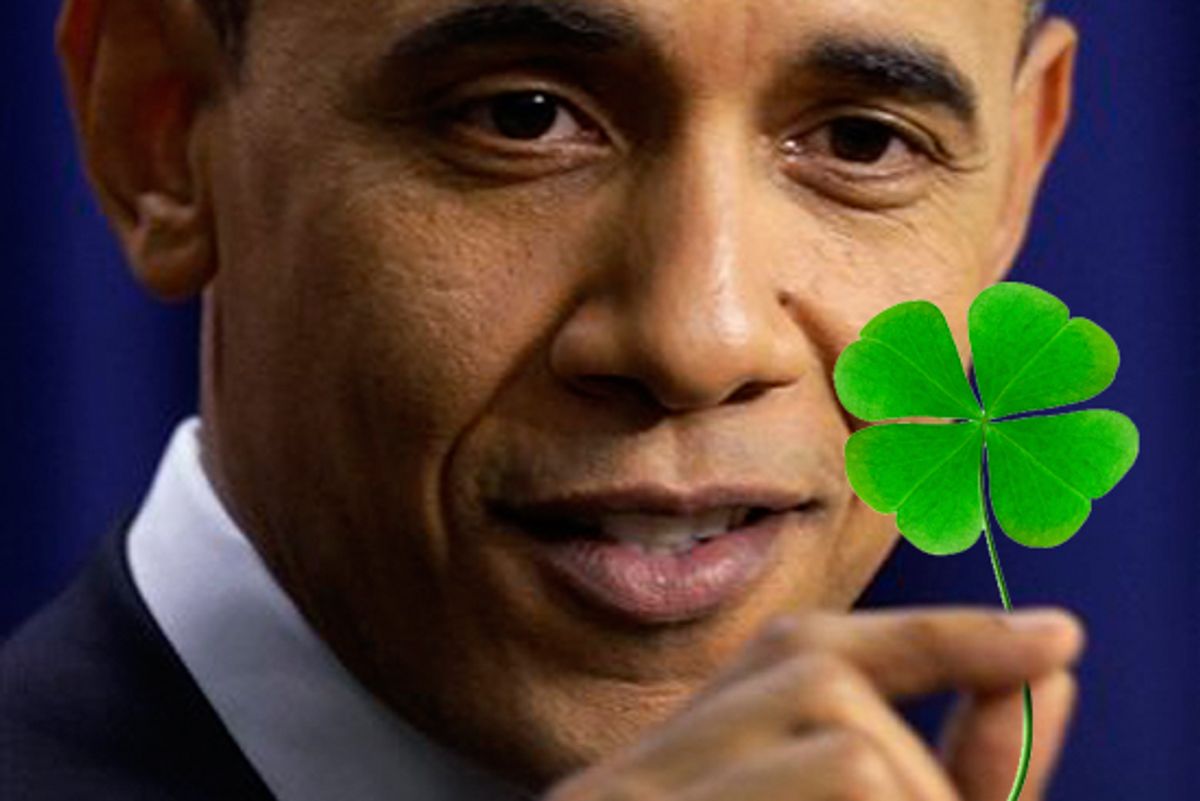 President Barack Obama found out years ago he had an Irish ancestor who fled the potato famine in Ireland in 1850. He can now claim 28 living relatives who also descended from that Irishman, including a Vietnam veteran, a school nurse and a displeased Arizona Republican.

The president's newly identified relatives are revealed in a study released to The Associated Press by Ancestry.com, a family history website whose genealogists also traced descendants of 23 other Irish passengers on the ship that brought Falmouth Kearney to the United States when he was 19.

The survey allowed genealogists to further trace branches in Obama's family tree and others who arrived on the ship, known as the Marmion, on March 20, 1850.

According to the survey, the passengers' descendants live in Canada, Syria and throughout the United States. Among Obama's newly identified relatives is 83-year-old Dorma Lee Reese, of Tucson, Ariz.

"I'm not a Democrat, so I can't say I clapped," said Reese, a retired brain-imaging technologist. "I don't appreciate what he's done by any means, but I do appreciate that he holds that office."

Kearney arrived with his brother-in-law William and his wife, Margaret Cleary. They were destined for Ohio, where Kearney's relative had left property in his name. Kearney married, had 10 children and later settled in Indiana, where he worked as a farmer.

When the 903-ton Marmion arrived after a 3,000-mile voyage to New York Harbor from Liverpool, England, carrying 289 passengers, it was following a well-worn route used by masses of Irish immigrants.

Among the carpenters, bricklayers and shoemakers arriving that day was Kearney, listed in records only as a laborer.

Like many of the passengers, he was fleeing a country ravaged by a potato blight that destroyed families and livelihoods and left the country starving. From the 1840s to the end of the 1850s, about 1.7 million Irish immigrants came to the United States.

On the day of the Marmion's arrival, the Brooklyn Daily Eagle reported that the St. Patrick's Society in Brooklyn had held its first annual banquet; a toast was made to the passengers' homeland, referring to it by its ages-old nickname: "Though gloomy shadows hang o'er thee now ... as darkness is densest, even just before day, So thy gloom, truest Erin, may soon pass away."

By 1860, the city had the largest Irish population in the world outside Ireland. Nearly 37 million Americans claimed Irish ancestry in 2009, according to census estimates.

Ancestry.com revealed Obama's Irish roots and his connection to Kearney in 2007, but it is uncovering its new findings this week following months of work as part of a larger project on Irish heritage.

"We had this idea of trying to look at a micro-study of how Irish immigrants have impacted the United States," said Anastasia Harman, the lead family historian for Ancestry.com.

Other distant Obama relatives include Roma Joy Palmer, 66, of Mulvane, Kan., who is retired from the insurance business, and Daniel Dillard, 63, a Vietnam War veteran and retired community college professor.

"I really don't like to claim a relationship to Obama. He is not my favorite president," said Palmer, a Republican. "I don't have anything against him personally. But I don't think we have the same agenda."

Dillard, though, said he took pride in his family "being related to a president of the United States," even though he is a registered Republican, did not vote for Obama and opposes his politics.

Sandra West, 65, of Hereford, Ariz., also was identified by Ancestry.com but had already discovered years ago that she was distantly related to Obama when she investigated the Dunhams of Kansas.

"I figured there had to be a connection somewhere," she said.

West, who works as a nurse at Palominas Elementary School, said that it had become a running joke and that the principal had suggested requesting a tour of the White House. But West figured the president already had enough going on.

"I don't think he would want to pay much attention to me," she said. "I'm sort of a peon down the road. I'm nobody special."