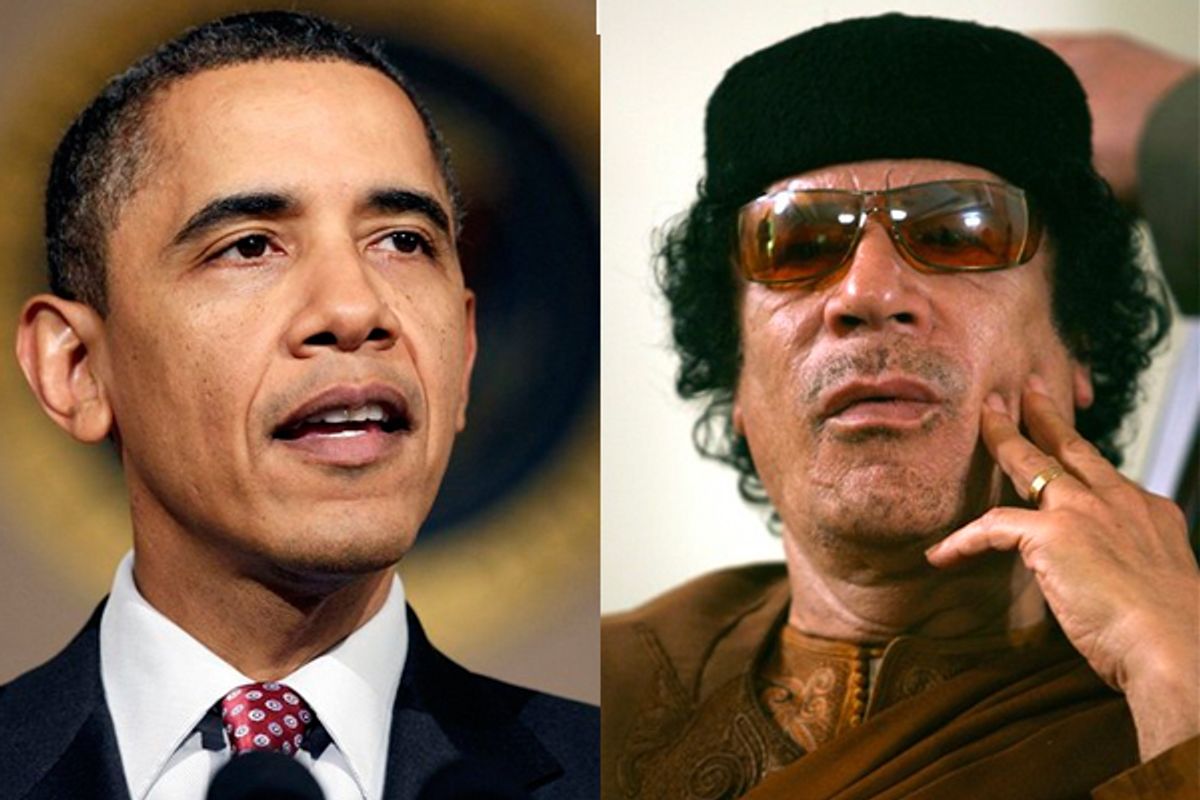 It's been clear for days that rebel forces in Libya are steadily losing ground in the face of counterattacks from Moammar Gadhafi's superior military.

In the face of this, President Obama, who previously said that Gadhafi must step down, has not acceded to calls to intervene militarily or impose a no-fly zone. White House Chief of Staff William Daley pointedly responded to critics earlier this month, saying, "Lots of people throw around phrases like no-fly zone -- they talk about it as though it's just a video game." John Kerry pointed out that the first step in imposing a no-fly zone is bombing anti-aircraft installations -- in other words, starting a war with Libya.

Today, though, the administration seems to be in the middle of a significant about-face. Susan Rice, the ambassador to the United Nations, said:

"[T]he U.S. view is that we need to be prepared to contemplate steps that include, but perhaps go beyond, a no-fly zone at this point, as the situation on the ground has evolved and as a no-fly zone has inherent limitations in terms of protection of civilians at immediate risk."

The Wall Street Journal's interpretation of what's going is that Obama "is seeking a U.N. Security Council resolution that would authorize a wide range of possible military strikes." The Washington Post notes that there is still ambiguity about "whether the United States or allied governments were making concrete plans to intervene militarily against Gaddafi’s forces." Another big question is which countries would be involved in any attack on Gadhafi.

The domestic political backdrop for all this is an intense debate over what to do about Libya. A group of neoconservatives wrote an open letter to Obama earlier this week asking him to impose a no-fly zone and possibly launch bombing raids. Signed by many of the most important supporters of the Iraq war -- Randy Scheunemann, Bill Kristol, Marty Peretz, Michael O'Hanlon, etc. -- the letter makes the following argument:

Today the United States and its allies should stand with the men, women and children of Libya who seek a future of peace and dignity.  The situation in Libya in the coming days will not just impact the Libyan people.  As protests continue against repressive regimes around the world, the message currently being conveyed by our inaction is that killing and repression will go unpunished and are the best option for despots seeking to postpone reform.

For the sake of our security as well as America’s credibility with people who seek freedom everywhere, we ask you to act as quickly as possible to ensure that the people of Libya -- and the world -- know that we are willing to back up our principles with action.

Others, like retired Gen. Wesley Clark, have argued that the last thing the United States needs right now would be another war with a Muslim-majority country. From a Clark Op-Ed last week:

To me, it seems we have no clear basis for action. Whatever resources we dedicate for a no-fly zone would probably be too little, too late. We would once again be committing our military to force regime change in a Muslim land, even though we can't quite bring ourselves to say it. So let's recognize that the basic requirements for successful intervention simply don't exist, at least not yet: We don't have a clearly stated objective, legal authority, committed international support or adequate on-the-scene military capabilities, and Libya's politics hardly foreshadow a clear outcome.

We should have learned these lessons from our long history of intervention. We don't need Libya to offer us a refresher course in past mistakes.

Of course, we still don't know what the United Nations will come up with -- and what role the U.S. might play in what happens. But this is clearly a fast-moving story.