Dan Savage is coming for your kids

And thank goodness for that. The sex writer and "It Gets Better" creator has a message for homophobic parents 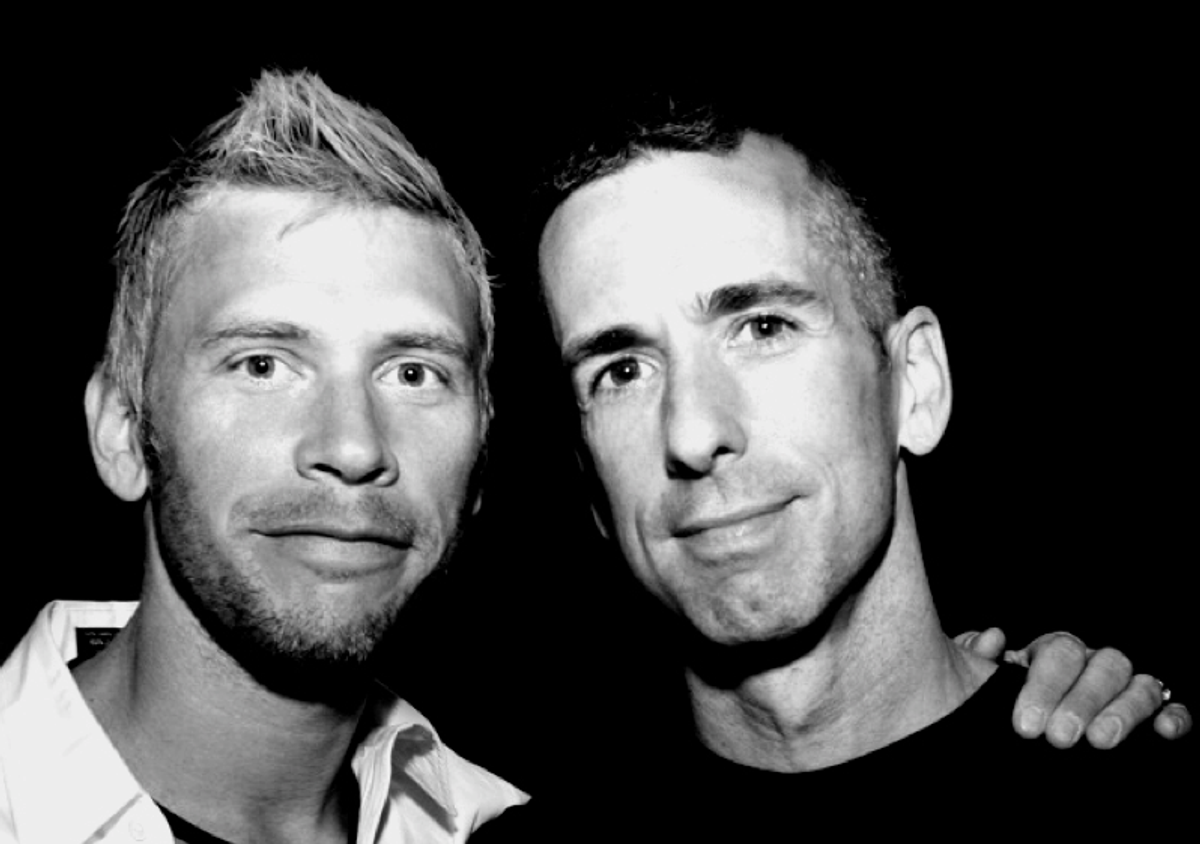 Lately, sex columnist Dan Savage has been known for an earnest effort -- his "It Gets Better" campaign -- but never forget, he is a man of signature snark. While interviewing him about his new book, "It Gets Better: Coming Out, Overcoming Bullying, and Creating a Life Worth Living," I asked where the idea for the project had come from. He replied: "Um, it's right there in the intro to the book." Never mind that I had just prefaced the question by explaining that I would ask him some questions that are answered by his introduction in the book -- he was just messing with me. Rest assured, he is still the same delightfully droll and impudent man who brought us the term "santorum."

The Savage Love author's startling earnestness isn't the only unusual thing about the campaign. We cynically expect frivolous entertainment, guerrilla marketing and shameless self-promotion from YouTube videos -- not sincere outreach. But last fall, in the wake of two teen suicides connected to anti-gay bullying, he and his husband, Terry Miller, turned that expectation on its head. The concept was simple: They asked LGBT folks to upload videos of themselves talking about the hardships they experienced growing up and coming out -- but, more important, how much better things got for them later in life.

They hoped for maybe 100 videos. There are now more than 10,000 -- including one from President Barack Obama. And now, there's a book, too. Some of the most powerful videos -- from big names, like Ellen DeGeneres and Hillary Rodham Clinton, to just everyday folks with great stories to tell -- have been transcribed and preserved in print form (much to the relief of the Luddites of the world). There are also brand-new and expanded essays, a section devoted to resources for LGBT teens, and an introduction from Savage that looks back at the project's meteoric rise to viral fame. It's chicken soup for the gay teenage soul -- or, you know, any soul not clouded by hate.

I talked to Savage by phone about the messages he's gotten from gay teens, how social media granted him direct access to kids that he never would have gotten otherwise, his own "coming out" experience and, of course, about how things got better for him.

Why is such a simple idea like "it gets better" so powerful?

Because it's true. It really goes to the heart of what I've always called the hero's journey for gays and lesbians. It's the process in middle school and high school when you realize you're different and you're then forced to make a profound and lasting choice about how you're going to live. Are you going to live with integrity and come out? Are you gonna put all of your relationships on the line so that you can be out? It can be very ugly and rocky, but then it gets better. Your family comes around. You lose friends, but you make new friends, better friends. You find love and you find that the world isn't middle school.

This all sounds so obvious looking back as an adult, but when you're a gay kid it's not obvious, and it's kind of hidden from you. Most gay kids don't have gay parents. And they're isolated from gay adults by design, because a lot of people believe that you can prevent a gay kid from becoming a gay adult by cutting them off from information and role models. Lots of gay 14-year-olds can see Ellen or Adam Lambert, but they don't see how you get to be Ellen or Adam Lambert. They don't see how you get to be safe and loved and secure. And what these videos show are average everyday LGBT people sharing their own stories of how they got from where you're at right now as a gay 8th grader to where we're at now as gay grown-ups.

Why did you decide to deliver that message via YouTube?

I was going from college to college doing speaking gigs and, reading about these suicides, I just felt like what I needed to be doing was going from high school to high school -- but I would never get permission to speak at a high school or middle school. Then it occurred to me that I was waiting for permission that I no longer needed to talk to gay kids. I could record a video, look in the camera and speak to a Bill Lucas before he killed himself instead of regretting not being able to speak to him after the fact. I could tell him that it gets better and to hang in there. That was sort of the "aha" moment and I called my husband to say, I have this idea, I want you to do this with me.

Obviously we weren't the only gay folks out there who had this impulse to speak to gay kids but were waiting for permission that was never coming. When my husband and I gave ourselves permission to do it, we explicitly gave permission to other LGBT adults to do the same, and people just rushed in.

One thing that surprised me was that the conversation wasn't limited to the YouTube videos, that many of the adults who posted the videos then received personal e-mails from LGBT teens seeking guidance. Is there a way to better facilitate that sort of direct communication and mentorship?

I don't know if there's a better way. Most kids who desperately need that kind of connection are being raised by parents who are denying them that connection. There's something very subversive about the whole campaign in that we were really reaching out to kids whose parents are also bullies. In the case of queer kids, they're not only bullied by their peers. A straight kid who's bullied because he's a geek or in a band goes home to parents who support him or her, and all too often gay kids go home to more bullying from their parents. Then they drive to church for more bullying from the pulpit.

The whole point of the campaign is that we're not waiting for permission anymore to talk to your kid, whether you want us to or not. For 40 years, the deal for gays and lesbians has been: OK, we get to torture you until you're 18, then you can do whatever you want -- you can move away, you can come out -- the only thing you can't do is talk to the kids who are under 18 whom we're still torturing. And if you try to reach out to them we're gonna accuse you of being pedophiles and attempting to recruit children into the gay lifestyle.

How do we help to actually remove the torment so many LGBT kids face in their middle- and high school years, so that they no longer are waiting for the day in the future when it gets better?

We push for safe schools legislation, like Al Franken's bill. We push for accountability when school administrators or teachers don't do anything or participate in bullying as was the case in Seth Walsh's school in Tehachapi, Calif. We also have to recognize, however, that we can't eradicate anti-gay bullying even if every public school in the country has an excellent anti-bullying program and a gay-straight alliance. There are going to be private evangelical Christian schools where that is never going to happen, or won't happen for decades. So we have to push for change and make it better where we can, but in some cases the best we can do is lob these videos over the wall.

What's a memorable response you've gotten from a gay teen?

I got an e-mail from a girl who at 15-years-old came out to her parents as a lesbian. They completely freaked out and shoved her into a reparative therapist's office and just really abused her emotionally, threatened not to let her see her siblings. She went back into the closet and told her parents that she was confused, that she wasn't really attracted to girls, and her parents bought it. I got an e-mail from her -- it makes me really choke up to talk about it -- saying that she was so grateful for the It Gets Better project and that she was watching videos on a friend's iPhone under the covers at night. Talk about subversive. These parents don't want this girl to be a lesbian, would not let this girl seek out a gay-straight alliance or see a therapist who wasn't a bigoted quack, and not only can't they isolate her the way they would like to, but we're literally lying under the covers with her at night with these videos.

That's really the perfect image to represent how you've been able to harness technology and get straight to the kids who need it most.

She said that the videos were keeping her sane. It's important to point out that so many of the videos are made by adults who were in this girl's situation: Their families were very hostile and condemning when they came out, but the families eventually came around. They're giving her hope that her family won't always be in this place that they're in right now.

You experienced some of that personally. Can you talk a bit about when you came out to your family?

I came out to my older brother Billy first and he was fine with it. I was always a little weird and into musicals and not so into girls. I wanted to come out to my mother sooner than I did, but my parents got a divorce and I didn't want to pile on. Hello, crying lady, this will take your mind off the divorce! So I waited. The first thing out of my mom's mouth was she didn't want to meet anybody that I was dating and she didn't want any boyfriends in the house. She wanted to wall off my homosexuality from her relationship with me. That was painful, but she came around really fast.

She arrived at a place where she viewed my relationship with my husband no differently than her other children's relationships with their partners. She was just as aggressive about meddling and butting in and judging and offering her opinions. The day my mother died, I went to see her in the hospital. We were saying our goodbyes and she told me to tell Terry, my husband who had been in my life for 14 years at that point, that she loved him like a daughter. It was hilarious and totally my mother. It's her sort of ironic reference to how hetero-normative our relationship was. One of the ways that it got better for us was that she had a sense of humor and could make jokes about us and how we lived and our homosexuality.