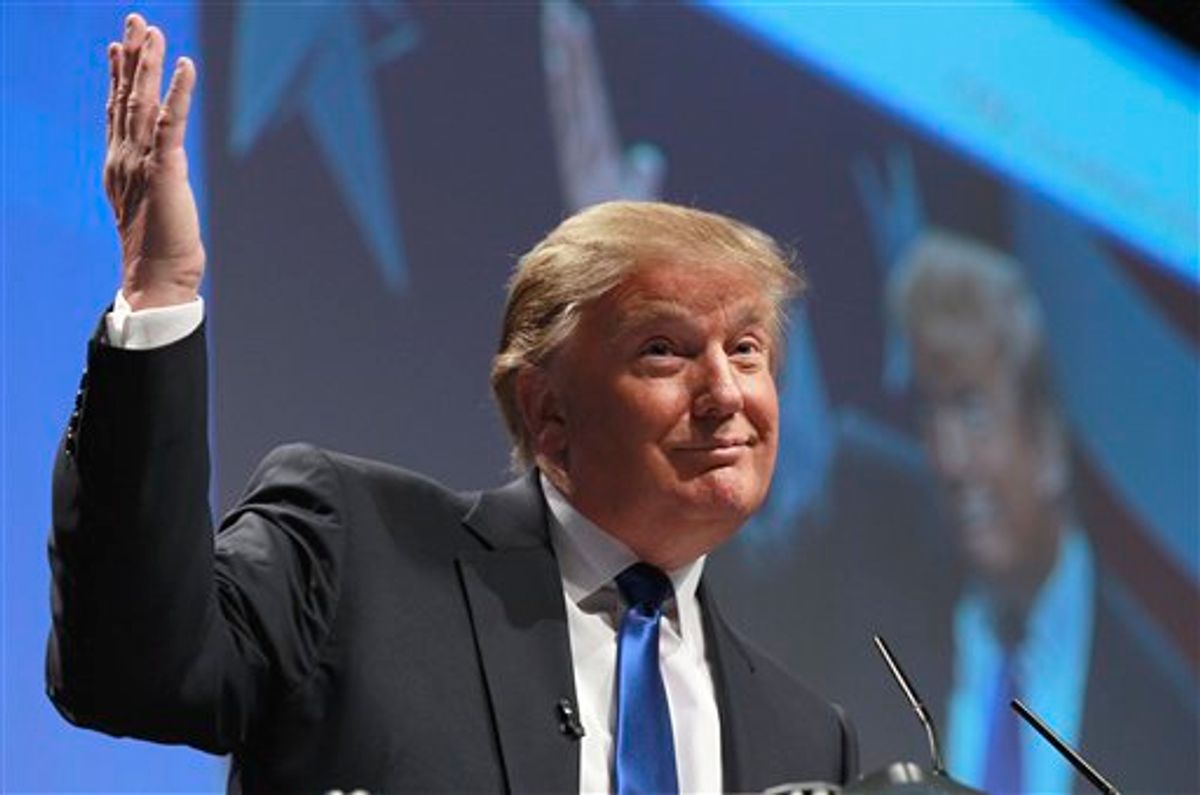 Donald Trump, a reality show host and savage parody of post-industrial Great Stagnation-era capitalism, is pretending to run for president, as a sort of performance art piece mocking the contemporary fad among elites of celebrating plutocrat billionaires as our wise superiors and pretending their vanity campaigns for elected office are some sort of charitable selfless "public service."

And he's really going all-out. What began as a sort of through-a-glass-darkly reimagining of the Bloomberg-for-president chatter added a dose of Gingrichian "false run to promote unrelated money-making endeavors" as he ramped up his "campaign" at precisely the moment the new season of his television show premiered.

Today Trump even became a pseudo-birther, in an interview with ABC News, which was for some reason taking part in an extensive marketing campaign for a television show that airs on a rival network:

"Everybody that even gives a hint of being a birther … even a little bit of a hint, like, gee, you know, maybe, just maybe this much of a chance, they label them as an idiot. Let me tell you, I'm a really smart guy," he said.
[...]
He explained the source of his doubt: "He grew up and nobody knew him. You know? When you interview people, if ever I got the nomination, if I ever decide to run, you may go back and interview people from my kindergarten. They'll remember me. Nobody ever comes forward. Nobody knows who he his until later in his life. It's very strange. The whole thing is very strange," he added.

Funny story! In 1990, Spy Magazine actually took a trip to Trump's boyhood home in Queens. And while Trump wrote of being "something of a leader" in his old neighborhood, the owner of the local candy store said: "I've been running this store for 28 years, and I don't remember him." Strange, very strange.

Trump went on to say that you should take him seriously as a candidate because he's very rich and would be able to give himself $600 million if for some reason his fake campaign needed $600 million.

That actually gets at the heart of why Trump would never run for anything: He's spent his entire career in the public eye scrupulously hiding how much money he actually has, in real life. He's sued people for saying his net worth is less than he says it is. But lots of people have their doubts about whether or not he'd actually be able to give himself $600 million at the drop of a hat. And if he ran for real, as Ben Smith and Maggie Haberman say, "at some point he'd actually be required to disclose his assets."

Which is obviously not going to happen, because it would ruin the whole joke.