Officials: No radiation danger to U.S. or territories 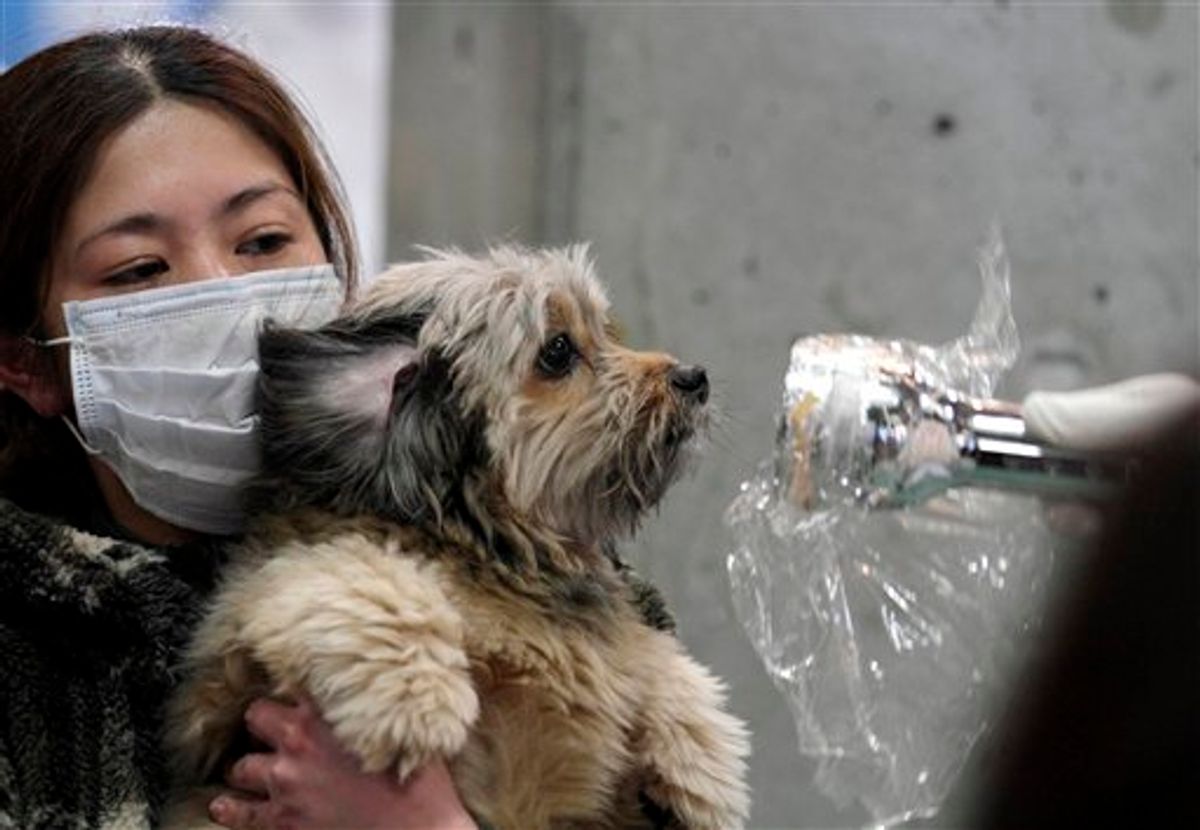 A woman holds her dog as they are scanned for radiation at a temporary scanning center for residents living close to the quake-damaged Fukushima Dai-ichi nuclear power plant Wednesday, March 16, 2011, in Koriyama, Fukushima Prefecture, Japan. (AP Photo/Gregory Bull) (AP)
--

The Obama administration said Thursday that radiation leaking from the crippled Japanese nuclear complex does not present a danger to the western United States or its Pacific territories at this time. Officials also defended a proposed 50-mile evacuation zone for American troops and citizens in Japan.

"I want to stress this is a prudent and precautionary measure to take," Gregory Jaczko, chairman of the Nuclear Regulatory Commission, told a White House briefing. The evacuation zone recommended by the U.S. is far wider than that established by Japan, which has called for a 12-mile zone and has told those within 20 miles to stay indoors.

Daniel B. Poneman, deputy secretary of energy, told the briefing that his agency agreed with the 50-mile zone, calling it "a prudent move."

A "very dangerous situation" remains in Japan, he said.

Still, Jaczko said, "Basic physics and basic science tells us there really can't be any harm to anyone here in the United States or Hawaii or any territories," such as Guam, American Samoa or the Northern Marianas.

Jaczko said the U.S. recommendation for the 50-mile evacuation zone was based on the "possibility of scenarios that we haven't seen yet." He also said it was based on "prudent assumptions and prudent assessments about what could happen."

Asked could be done to make sure that radiation from the world's worst nuclear emergency in a quarter century would not harm the United States, Jaczko said: "We are really focused on making sure first and foremost that the plants in this country are safe."

The officials spoke as Japanese emergency workers sought to regain control of the dangerously overheated nuclear complex, dousing it with water from police cannons, fire trucks and helicopters to cool nuclear fuel rods that were threatening to spray out more radiation.

The U.S. Energy Department said it had conducted two separate tests to measure how much radioactive material had been deposited on the ground in Japan. That data, Poneman said, was consistent with the recommendation for American citizens to evacuate a 50-mile radius around the plant.

The U.S. officials declined to criticize the Japanese call for a smaller evacuation zone.

Facts on the ground at the damaged nuclear plant are "genuinely complex and genuinely confusing," the deputy energy secretary added.

The crisis has been complicated by the spare and often contradictory information issued by the Japanese government and the Tokyo Electric Power Co., heightening a sense of uncertainty about what's happening in the reactors.

"It's not easy to get information from the site," said White House spokesman Jay Carney.

Carney said that President Barack Obama, who was to address the crisis in a late-afternoon statement, had taken the rare step of asking the NRC, which is an independent agency, to take into account what is happening in Japan and to apply lessons learned to the analysis of security and safety of reactors here. "The fact that the president has made that request himself only adds to the urgency of that mission," Carney said.